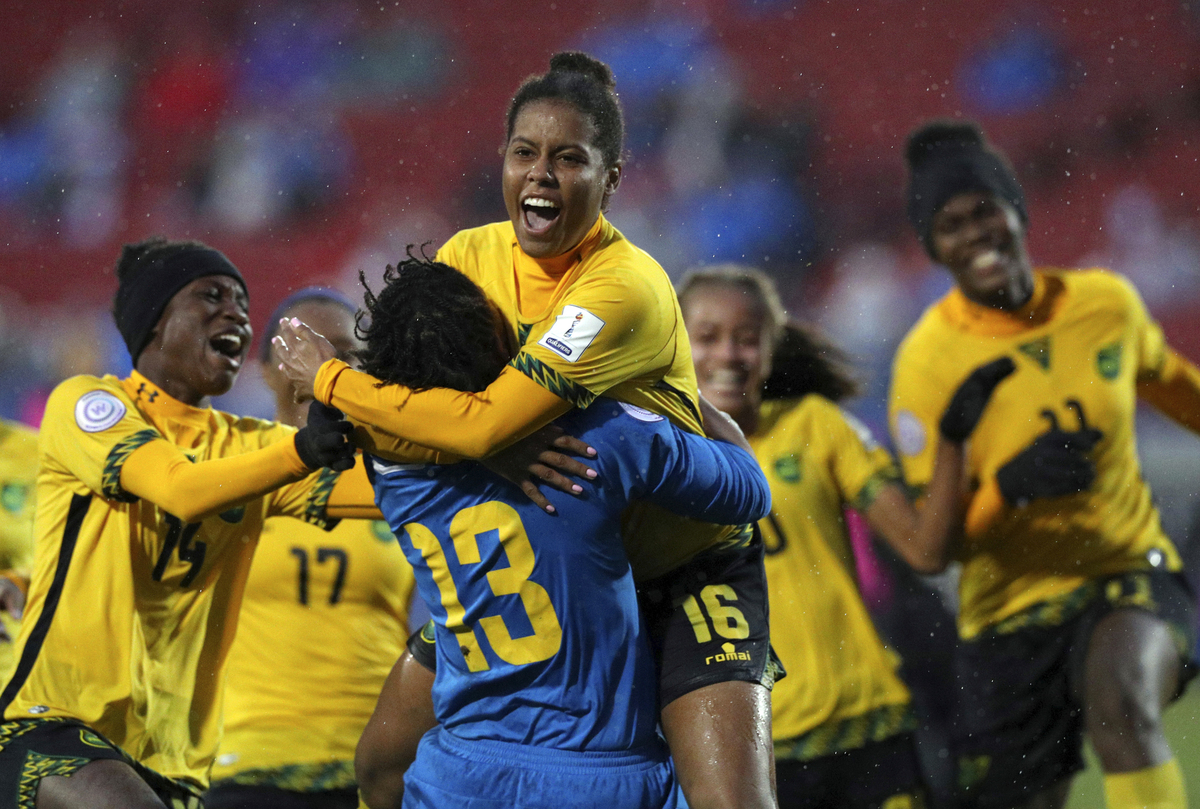 The “Reggae Girlz” of Jamaica are the underdogs of this year’s Women’s World Cup.

The Jamaican women’s national soccer team debuts on Sunday, June 9 at the tournament in France against a highly-rated team from Brazil.

FIFA, soccer’s global governing body, ranks the Jamaicans the lowest among the 24 teams at the tournament. But don’t try to tell that to any of the players.

“Football is a very funny thing,” says Jamaican midfielder Deneisha “Den-Den” Blackwood. “You can never predict what’s going to happen. And I feel like we are going to be the team to shock everybody in this World Cup.”

Just five years ago, Jamaica didn’t even have a women’s national soccer team. Now they’re the first team from the Caribbean to ever qualify for a Women’s World Cup.

Last week, the Reggae Girlz, as the team calls itself, continued to make history, shattering attendance records in Scotland.

They were in Glasgow to play the Scottish women’s national team in a final warmup match before the month-long FIFA tournament, which started on June 7.

The event destroyed the attendance record for a Scottish national women’s team home game, attracting more than four times the previous record of 4,098 spectators. And the teams didn’t disappoint.

Jamaica went up early on a goal by their star forward, Khadija Shaw, who’s known by her nickname, Bunny.

“It was a really good match,” says 24-year-old Natalie Lawrence, who was in the stands. She describes herself as “half-Jamaican, half-Scottish” and lives in Manchester. She’d heard about Shaw and seen some video highlights of her online — but says it was amazing to see “Bunny” play in person.

“She’s the best football player for Jamaica in a long time,” she says, gushing about the striker. “Shaw’s like ice-cold, slots that ball in. Can go one-on-one like it’s nothing. She knows what she’s doing. She’s absolutely quality.”

But Shaw and her teammates almost didn’t make it to the World Cup — not because they barely squeaked by Panama in the qualifiers but because just a few years ago Jamaica didn’t even have a national women’s soccer team.

The Jamaican Football Federation disbanded the Reggae Girlz after they failed to qualify for the 2015 World Cup in Canada. Then, after they were resurrected, the Federation suspended funding for them again while facing budget shortfalls in 2016.

“We are just happy to be here at this moment,” says Shaw after dinner at an event celebrating the team at a Caribbean restaurant in London last week. “We’ve worked hard for this. I don’t think a lot of people know what we’ve gone through behind the scenes.”

Shaw says over the last five years, the Jamaican women’s team has had to fight not just to survive but to fund their own training camps. The players didn’t have their own uniforms. Until recently, their head coach, Hue Menzies, was a volunteer. Prior to taking over the Jamaican women’s national team, Menzies was coaching teenage girls on a youth club team in Florida.

Jamaican star forward, Khadija Shaw, battles for the ball during a friendly match against Scotland in Jamaica’s last game before the Women’s World Cup. 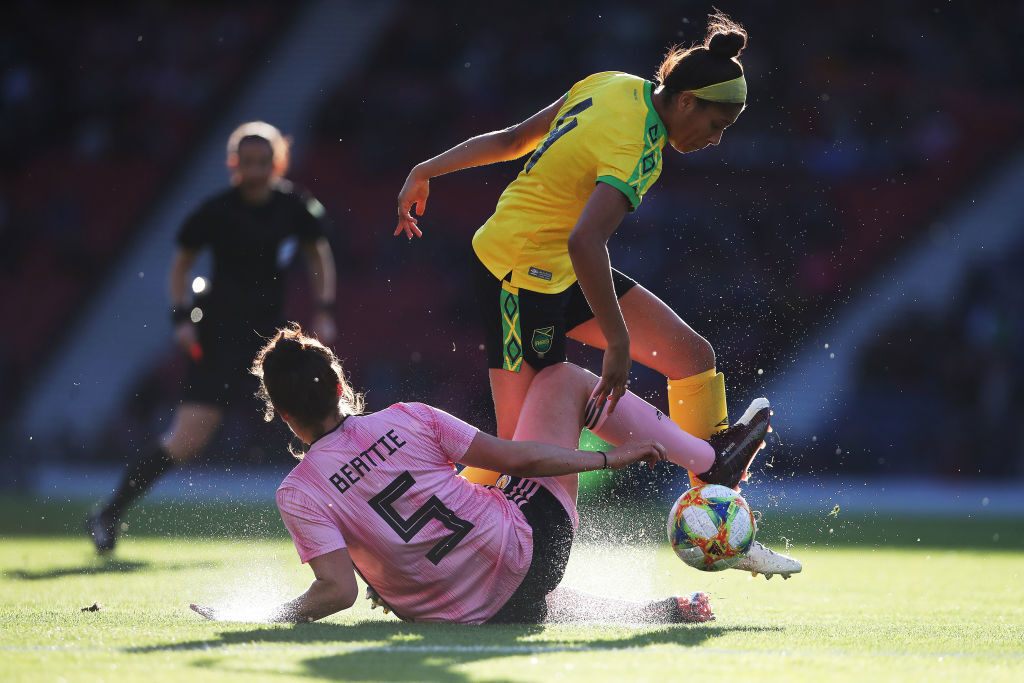 Jamaican star forward, Khadija Shaw, battles for the ball during a friendly match against Scotland in Jamaica’s last game before the Women’s World Cup.

Shaw says it’s been very hard to pull together the resources that the Reggae Girlz need.

“We have talent. We’re very athletic. But talent can only go so far,” she says of the team’s financial woes. “That’s been us forever. You know.”

Even flying to Europe, the entire team’s reservation out of Florida was canceled because no one confirmed the tickets. The players got rebooked on flights that forced some of them to have to fly through Morocco to get to Scotland. Much of their luggage was lost and only arrived just before their game in Glasgow.

“We’ve faced a lot of setbacks and adversities so that’s nothing new to us,” Shaw says.

The person Shaw credits with turning the Jamaican national women’s football team around is Cedella Marley, the daughter of reggae star Bob Marley. In 2014, Marley, herself a singer, released a single “Strike Hard” to cover basic expenses for the team.

“We need to train. We need nutrition. We need gear. We need a ball,” Marley says.

Since releasing that single in 2014, Marley has become a tireless activist for the Jamaican female squad.

“For me everyone should have the right to go after their dreams and passions without gender being a factor,” she says.

But to Marley it was clear that when it came to the Reggae Girlz, gender was a factor.

In 2014, when the Jamaican Football Federation disbanded the team, the Federation continued to fund the men’s team even though the Reggae Boyz hadn’t qualified for a World Cup since 1998.

Players on the Jamaican women’s national soccer team credit Bob Marley’s daughter, Cedella, with saving the squad. The singer and entrepreneur spearheaded fundraising efforts for the Reggae Girlz after the team was disbanded in 2014.

Marley spearheaded fundraising drives, badgered the Jamaican Football Federation for support and made it clear that she wasn’t going to put up with what she calls “outdated ideas” about women in football.

“Jamaica’s female athletes are at the mercy of corporate sponsors — many of whom still feel that women should stick to more ‘acceptable’ sports like swimming and netball and tennis. Which is fine. If they want to do [those sports], then give them the resources to do that. But if you have a group of girls who just want to play football, give them the resources to play football,” she says.

Jamaica, however, is nation of just 3 million people. It’s kind of as if Arkansas had somehow managed to qualify a team for the World Cup.

Adding to the Reggae Girlz challenges, soccer isn’t the most popular sport in Jamaica. This week, after the Jamaican men’s soccer team beat the U.S. in a friendly, The Gleaner newspaper in Kingston led its sports page not with the win but with a story about how the Windies cricket team is fit and ready to take on Australia.

Karen Madden, a sports reporter at The Gleaner, says Jamaican sports fans generally don’t pay much attention to soccer and are even less interested in women’s soccer than men’s. But she adds that this year’s band of Reggae Girlz has been changing that.

“Before they left Jamaica I saw those players with a group of little girls at Greenwich Farm primary school, an inner city school [in Kingston],” Madden says. “The awe and admiration I saw in those girls’ faces encapsulates what the Reggae Girlz have already done just qualifying for the World Cup, what they have done for this small nation of Jamaica.”

Despite not being a nation that normally embraces women’s soccer, Madden says Jamaicans are very proud that the Reggae Girlz have made it to the tournament in France.

“These are Jamaicans. Khadija Shaw is from a tough inner-city community. Jody Brown is from a rural town in St. Anne. A lot of players on the team are from humble beginnings,” she says. “And they are going to be playing on FIFA’s top stage.”

The Reggae Girlz have beaten the odds just to get to the Women’s World Cup, and Madden says she wouldn’t bet against them now.