Mourners gather around the casket of 28-year-old Atatiana Jefferson, who was fatally shot by a police officer earlier this month in Fort Worth, Texas. At her funeral on Thursday, family and friends remembered the impact she had on her community. 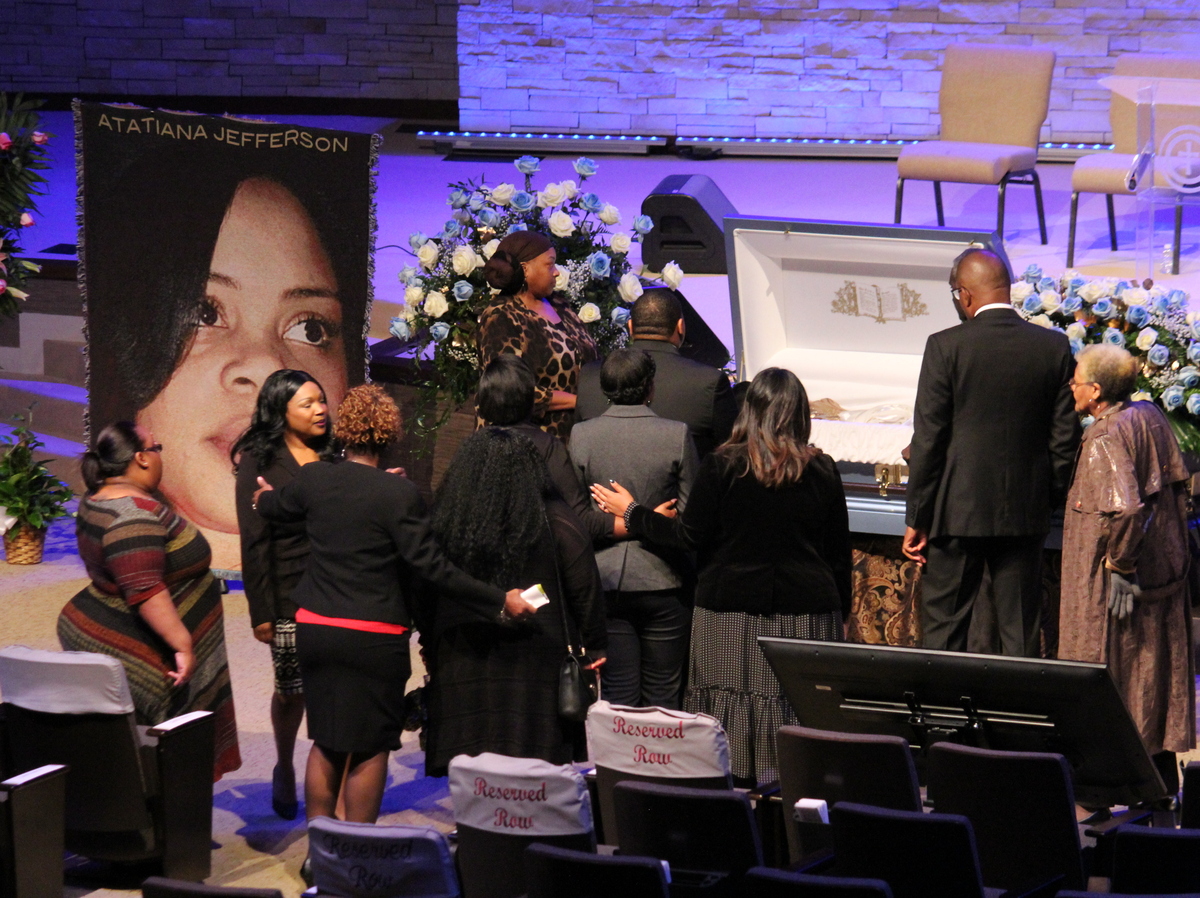 Mourners gather around the casket of 28-year-old Atatiana Jefferson, who was fatally shot by a police officer earlier this month in Fort Worth, Texas. At her funeral on Thursday, family and friends remembered the impact she had on her community.

Atatiana Jefferson, the 28-year-old woman shot to death by a police officer in her own home, was remembered on Thursday by family and friends as a loving aunt who overcame difficult circumstances to become the first in her family to graduate from college and had her eyes set on becoming a doctor one day.

Hundreds of mourners gathered at a Dallas church to honor Jefferson, whose death became the latest flash point in the national conversation about police accountability and the killing of black residents by white police officers.

Marquis Jefferson, in a letter read by his wife, described his daughter as loving and kind, noting her “shining smile,” and her “quiet and strong focus.”

Losing a daughter so young and unexpectedly is “like going through an earthquake,” Carter told the group, “your world has been shaken.”

As loved ones filled the church, sobs and wails from her family rung out. A large picture of Jefferson stood next to her casket.

“We are here because an amazing lady lived, and impacted so many,” said the Rev. Bryan Carter, senior pastor of Concord Church, where Jefferson’s funeral was held.

Yolanda Carr, Jefferson’s mother, praised her daughter’s “humble boldness,” her drive to succeed and her loving nature. Carr made her remarks in a letter that was read by a pastor. Carr was not at the funeral because she has been in the hospital.

“You said you were going to change the world,” Carr wrote in her letter. “I believe you still will.”

In an interview on Thursday, Carr said her daughter’s life had an outsized affect on many in Fort Worth.

“She had a great personality. She was a productive member of society. She had strong Christian faith. She didn’t bother anyone,” Carr told NPR in a phone interview. “Losing her hasn’t been easy.”

Jefferson was a graduate of Xavier University of Louisiana and was working in pharmaceutical equipment sales at the time of her death. She had hoped to eventually go to medical school to become a physician.

At the funeral service, Marquis Jefferson said he intends to establish a foundation in his daughter’s name to assist aspiring black doctors.

Earlier this month, a Fort Worth police officer responding to a neighbor’s call to a nonemergency number about house doors being open moved to the side of Jefferson’s house with a flashlight. The officer told her to put her hands up before shooting once through her bedroom window and killing her.

Jefferson, just before the shooting, was playing video games with her 8-year-old nephew, who heard suspicious noises in the backyard around 2:30 a.m. on Saturday, Oct. 12.

According to an arrest affidavit, the rustling outside sent Jefferson to grab a handgun from her purse. As she approached the window of her bedroom, she was holding the weapon, according to the charging document.

Police have said that Jefferson had a right to arm herself if she felt threatened in her own home. Top police officials have said there was “absolutely no excuse” for the shooting.

Aaron Dean, the officer who shot Jefferson, resigned from the department and has been charged with murder.

The incident shocked the Fort Worth community, a city that has experienced a string of officer shootings in recent months.

Dean, who is white, is seen on body camera footage firing his weapon at Jefferson, who is black, almost immediately after ordering her hands up. Dean never identified himself as a police officer.