Sarah Groustra, a Brookline High School graduate, wrote a column in the school newspaper about period stigma last year. It led to Brookline voting to offer free pads and tampons in all town-owned restrooms. 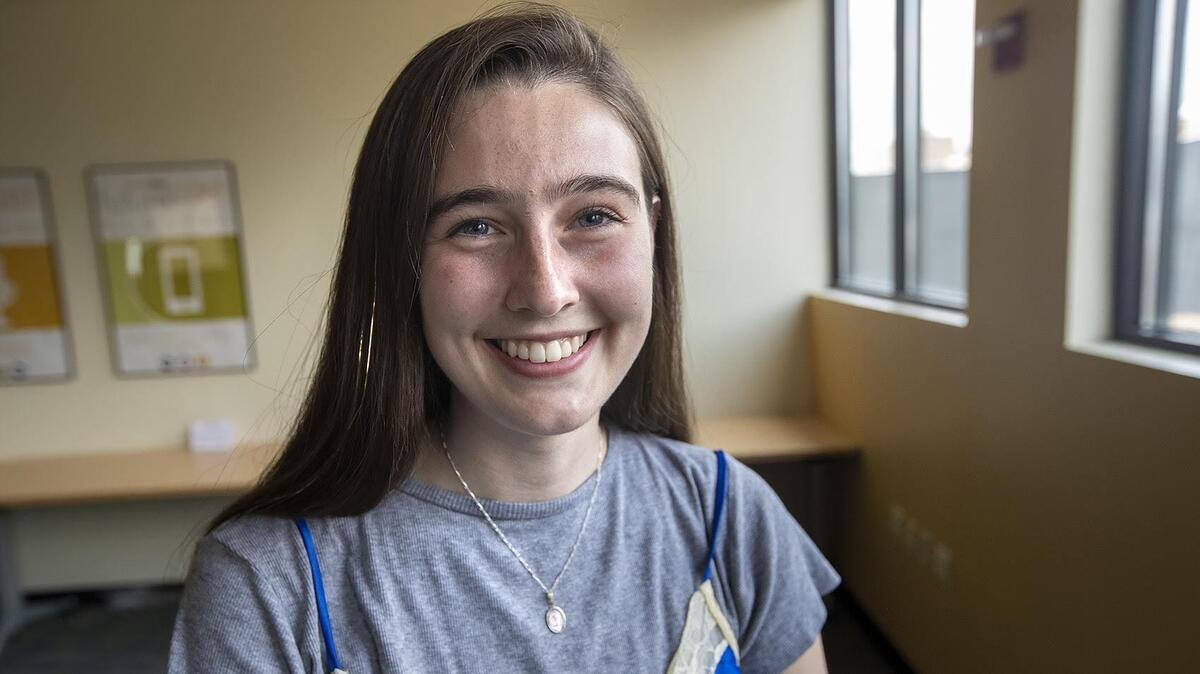 Sarah Groustra, a Brookline High School graduate, wrote a column in the school newspaper about period stigma last year. It led to Brookline voting to offer free pads and tampons in all town-owned restrooms.

When you walk into a public bathroom, you expect it to be stocked with toilet paper, hand soap and paper towels or a hand dryer.

But tampons and pads?

Brookline, Mass., wants to make menstrual products as routine as those other bathroom staples, and in May voted to become what it says is the first municipality in the United States to offer free tampons and pads in all of its town-owned restrooms, in places like the town hall, libraries and the recreation center. The schools are expected to follow suit.

Sarah Groustra is the one who got this all started. Last year, the then-senior wrote a column in the Brookline High School newspaper about the stigma around periods.

“Everyone had these strategies of how to hide their menstrual products,” she says. “When I changed after dance classes, I would zip tampons into my boots so that I wouldn’t have to take them out during class to go to the bathroom.”

Groustra called for an end to “shaming menstruation.”

“It shouldn’t be a brave, or sort of self-confident thing to be able to take a tampon out of your backpack and go to the bathroom,” she says.

Rebecca Stone, an elected member of Brookline’s legislative body, read the column. Even for the self-described feminist, it was an eye-opener.

“It talked about things having to do with period-shaming that … simply never occurred to me,” she says. “And of course once you start seeing it, it becomes more and more obvious what a fundamental issue this is for gender equity and for the dignity of women and female-bodied individuals.”

Stone got to work alongside Groustra and other Brookline students writing the proposal. Elected officials took it up and it passed unanimously on May 23.

Brookline has until July 2021 to install dispensers and stock them with product. It’s estimated to cost the town $40,000 upfront, and about $7,500 a year going forward for the products — what Stone calls a drop in the bucket of Brookline’s annual budget of more than $300 million.

But it’s worth it, advocates say, to end the stigma — and the strain — on those who have periods.

“In the United States, girls learn very early that this is their problem,” Stone says. “You are expected to keep it from other people, to be discreet. And so we tuck the tampons, and if we’re in trouble we try to find friends, and we talk about it quietly, and we use euphemisms, and we do not impose this on others.”

Restrooms in Brookline buildings will have menstrual products all restrooms — as not all people who have a period identify as female.

What the town is doing is part of Nancy Kramer’s dream. She’s the founder of Free the Tampons, a national organization she started in 2013 after talking about period equity for years.

“I’ve told my children that before I die, that I hope to change the social norm so that these menstrual supplies are freely accessible in the majority of public restrooms,” she says.

Part of getting there is equating tampons and pads with other bathroom supplies.

There are efforts like Brookline’s across Massachusetts and the country.

Boston’s City Council furthered a measure on Wednesday to hold a hearing on putting menstrual products in public schools, libraries and other municipal buildings. Students at a school in Cambridge, Mass., helped start a pilot program for students to begin receiving tampons and pads in school bathrooms.

Other statutes, like New York City’s, include prisons and homeless shelters — where people might not be able to afford tampons and pads.

In Massachusetts, a bill to provide free menstrual products in schools, prisons and jails and shelters is pending at the State House and has more than 70 co-sponsors.

Sasha Goodfriend, president of the Massachusetts chapter of the National Organization for Women, says the Massachusetts bill focuses on access for the most marginalized population. But it’s also about taking away the shame around periods.

“We’re really excited about the opportunity to break away that stigma and those barriers around something that’s natural and really be able to be our full authentic selves in all the spaces,” she says. “And that means acknowledging that we are menstruating for about a week, every month, for decades, for many of us.”

To Brookline’s Stone, this is more than just an economic issue — it’s a public hygiene issue. Nearly all of the men she spoke with understood that, she says. Instead, it was some women who seemed uncomfortable.

“A few women were the ones who sort of said, ‘I don’t understand why this is a big deal. I dealt with it, why can’t everybody?’ ” she says.

Groustra, who sparked the conversation in Brookline, is now a student at Kenyon College in Ohio. She says it isn’t just about having the tampon there when you need it. It’s about an acknowledgment that periods happen, a signal of acceptance from your hometown.

“By having the community or that community space provide for you in that way,” she says, it sends a message that “we understand that this is something that happens and we want to be there for you and provide this for you.”