Employees peek through the door of a showroom at a food factory in Pyongyang, North Korea. 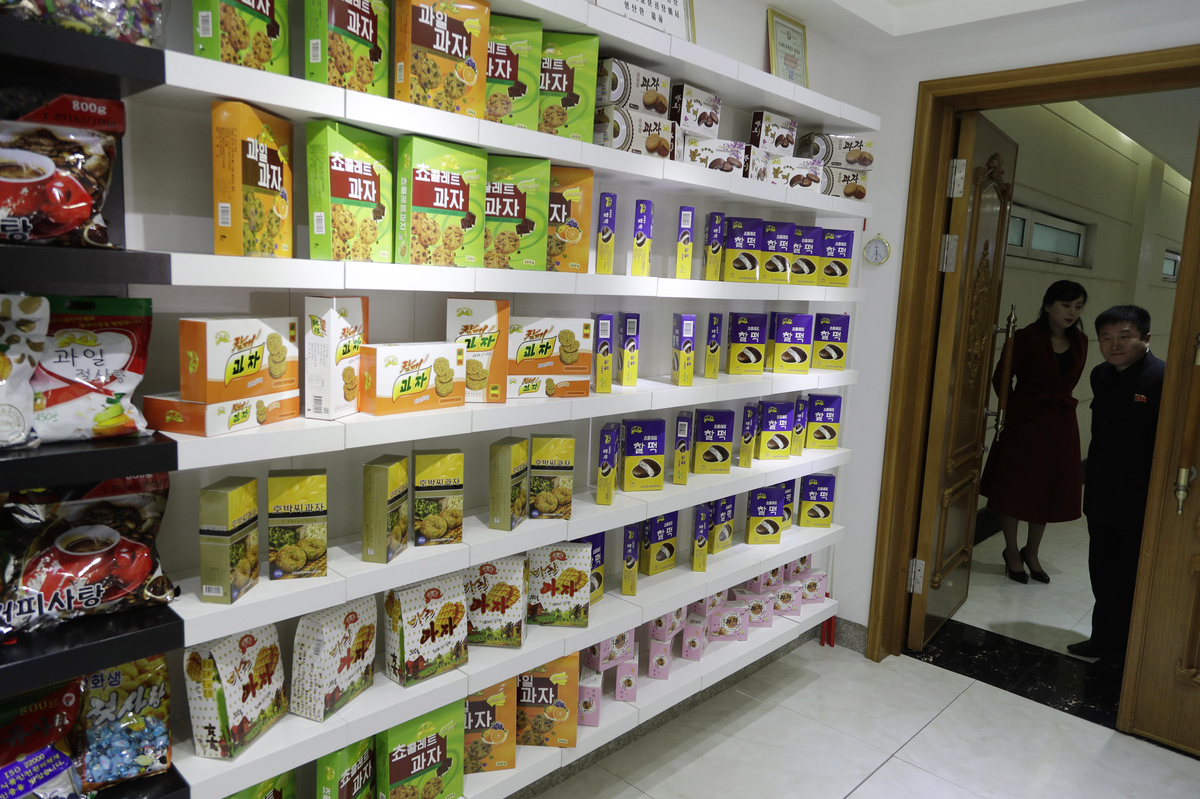 Employees peek through the door of a showroom at a food factory in Pyongyang, North Korea.

Facing the worst drought in nearly four decades, the country is grappling with food shortages that affect 40% of its population. The donation has humanitarian – but also diplomatic – aims. But it’s unclear how much the aid will help.

South Korea last week approved $8 million in food aid to North Korea, in response to what U.N. agencies say are the worst harvests there in a decade and severe food shortages affecting 40% of the North’s population.

Despite the South Korean government’s insistence on separating the aid from politics, the donation is widely seen as having the political goal of improving inter-Korean relations. With nuclear negotiations with the U.S. in limbo, South Korea is eager to nudge the North to return to the negotiating table — and humanitarian aid is one way to do that. Seoul was quick to point out that U.N. sanctions targeting the North’s nuclear programs allow for humanitarian assistance and that the Trump administration is on board with it.

Even though North Korea requested the aid from international aid organizations and South Korean food will be distributed through those groups, Pyongyang was not impressed with the donation. It called the gesture — the first from Seoul since 2015 and the first under the administration of President Moon Jae-In — “non-essential” to ties between the two Koreas.

Aid agencies and politicians often trot out a Ronald Reagan quote: “A hungry child knows no politics.” The idea is that nobody wants civilians to starve, even though their rulers’ policies may be responsible for that hunger. And so governments and aid agencies must deliver humanitarian assistance.

The donations will be delivered through the World Food Programme and UNICEF. They will include nutritious food and medicine for infants, children and mothers at hospitals, nurseries and orphanages.

But the aid carries risks. One is that the aid is based on incomplete or inaccurate information. Another is that the aid will be diverted away from the intended recipients. In addition, the money a regime saves on buying food may be used on weapons. And the aid may delay reforms and perpetuate a system that distributes food inequitably.

To determine what kind of aid is needed, in April, teams from the U.N. Food and Agriculture Organization (FAO), and the World Food Programme (WFP) fanned out across 12 counties in 6 of North Korea’s 9 provinces to assess whether the country has enough food. (A similar survey was conducted last November). They spoke to farmers and officials and visited grain stores and nursery schools. That’s not easy in North Korea, where aid agencies’ access is often restricted.

The survey found that abnormally high temperatures, drought in some areas and flooding in others severely reduced the 2018 fall harvest of grains including rice, wheat and soybeans, leading to food insecurity for 10.1 millionof North Korea’s 25.5 million people. North Korea’s government is calling the droughts the worst in nearly four decades.

That’s not nearly as bad as the mid-1990s, when up to 3.5 million people starved to death, largely due to economic mismanagement and the loss of Soviet support following the collapse of the USSR. But the survey did find that the country will have a shortage of 1.36 million metric tons of food.

“When we were talking to household members especially with housewives, they were always reporting an incredibly low consumption of proteins,” recalls Mario Zappacosta, a Rome-based FAO senior economist who co-led the survey in North Korea.

Meat, fish and eggs are rare in many North Koreans’ diets. Many survive on rice or potatoes and kimchi, a spicy, fermented Chinese cabbage dish. “There is a really poor and monotonous diet. This [finding] was really remarkable,” says Zappacosta in a phone interview.

The international sanctions imposed by the U.N. Security Council and the U.S. in 2006, in response to North Korea’s nuclear weapons testing, also have an effect. Although they are aimed at the North’s military, not civilians, they make it hard to get machine parts and gas needed for efficient mechanized farming.

“With the reduced availability of fuel, we saw people using oxen, but also doing [ploughing] by hand,” Zappacosta says.

Besides government rations, food is also distributed through networks of farmers’ markets, and this was a blind spot in the survey, as the teams could not get access to those markets.

But Zappacosta says findings were cross-checked against other data, such as satellite photos of farmland, and while there might have been a small margin of error, as for the “order of magnitude, we’re quite confident.”

Zappacosta notes that the WFP does monitor the distribution of food aid to ensure that it’s reaching its intended recipients. And this is something that donors insist on. But he describes his own agency as a “technical institution” that avoids making policy recommendations or prescribing reforms.

Benjamin Katzeff Silberstein, a fellow at the Foreign Policy Research Institute and editor of the blog NKEconwatch, which follows the North Korean economy,notes that while the food situation in North Korea looks bad, it comes following a decade of increasing harvests and agricultural yields. These are due in part to limited agricultural reforms launched by Kim Jong Un.

“Farmers getting stronger incentives, being able to decide more about their own production, getting to keep more of what they farm — these things have almost certainly played a role in making agricultural production go up,” he says.

Silberstein argues that the food shortages are less about how much food is produced than about how it’s distributed. And the distribution, he says, favors Pyongyang, where politically loyal elites can now nosh at a growing number of Western-style cafes and fast food outlets.

“North Korea’s food shortages aren’t about external shocks from the weather, or from sanctions. They’re about a system. That’s it,” he says.

Silberstein adds that the international community has sent the North food aid for some two decades — but food shortages “are going to keep happening as long as fundamental changes aren’t put into place.”

Food shortages are also due to the government’s spending priorities, Silberstein says. Despite the famine, Pyongyang has money for vanity projects, like beach and ski resorts, and of course, weapons systems.

“If you can manufacture nuclear weapons and ballistic missiles clearly you can import enough food to make up for the shortfall in the harvest. There is no doubt about it.”

Silberstein also points to the government’s longstanding policy of trying to be self-sufficient in agriculture. That’s unwise, he says, as the mountainous country has very little arable land, and would be better off exporting manufactured goods, and using the earned money to import food.