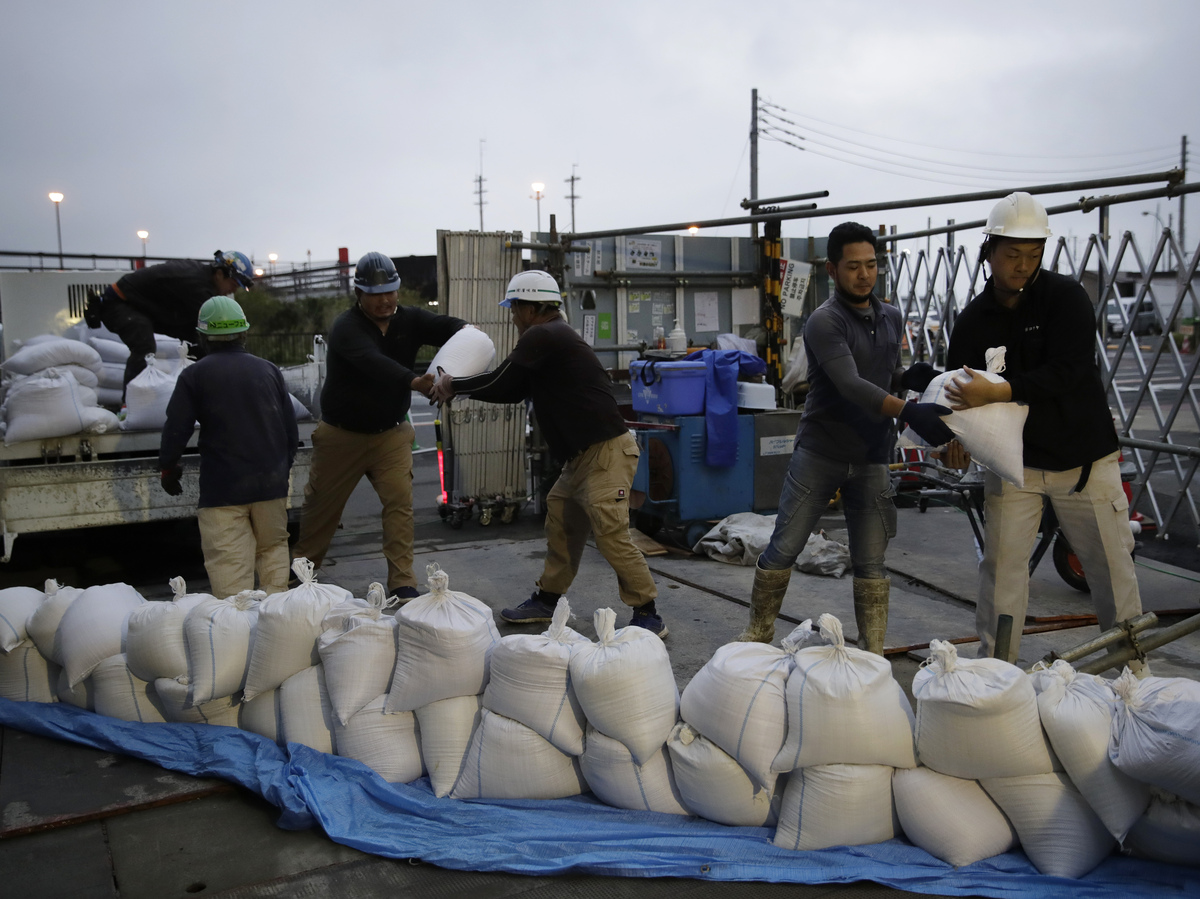 Typhoon Hagibis, the largest to hit Japan in 61 years, made landfall Saturday evening, sweeping northeast through the Tokyo region as a 5.7 magnitude earthquake struck an area in the storm’s path earlier that day.

According to NHK, Japan’s national broadcaster, the storm’s path has left two dead, 10 missing and 90 injured so far, the 19th named storm this year. At least eight rivers have flooded their banks, several dams have begun discharging water and landslides threaten those sheltering in their homes as Hagibis continues to pour down a record amount of rain and whip the land with strong winds. If the dams do release their water in an emergency measure, they risk flooding downstream areas that already face storm surges, where civilians may not have evacuated.

As NPR reported on Friday, the Japan Meteorological Agency forecast chief Yasushi Kajihara said that Hagibis resembled the 1958 Kanogawa Typhoon that killed more than 1,200. Although the typhoon abated after landfall and has made its way back to the Pacific Ocean without numbers approaching those of the Kanogawa Typhoon, the death toll may rise as recovery and rescues continue for those threatened by continued flooding and landslides.

Officials in Gunma Prefecture said a landslide destroyed houses in Tomioka Saturday evening. Two persons were rescued from the wreckage, but one died afterward. Another two are missing in a Fukushima landslide, according to the Japan Times.

Surging waves hit against the breakwater and a lighthouse as Typhoon Hagibis approaches at a port in town of Kiho, Mie prefecture, central Japan on Saturday. (AP Photo/Toru Hanai) 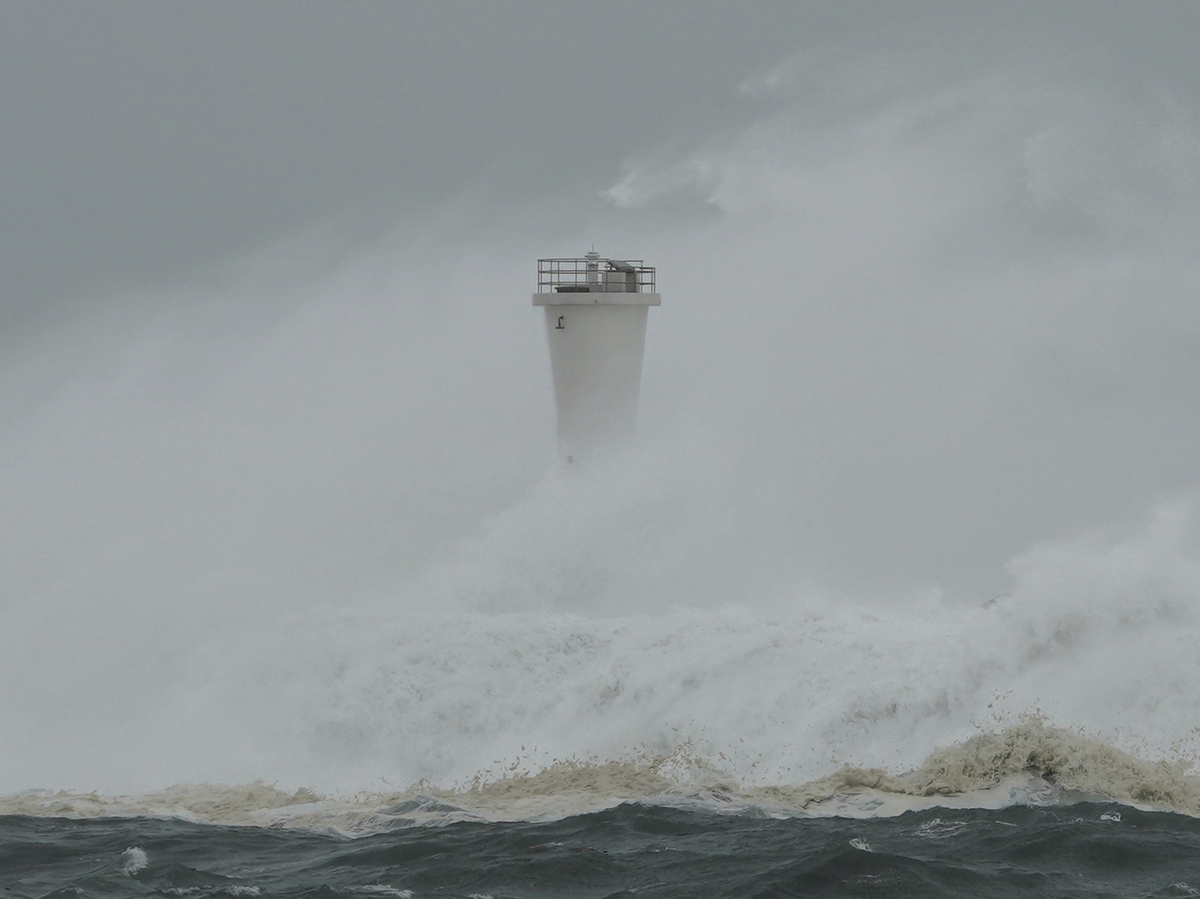 Surging waves hit against the breakwater and a lighthouse as Typhoon Hagibis approaches at a port in town of Kiho, Mie prefecture, central Japan on Saturday. (AP Photo/Toru Hanai)

The typhoon made landfall in Shizuoka prefecture Saturday evening local time as the 5.7-magnitude earthquake off the coast of neighboring Chiba province sent tremors ahead of the storm’s fury. No tsunami warning was issued after the earthquake. Just north of Shizuoka is Tokyo prefecture, where NHK reports that the Tokyo and Nagano governments have asked Japan’s military to assist in the region.

The storm, as of midnight local time, had passed through the Tokai, Tokyo and Kanto regions and is projected to move along the northeastern coast past Hokkaido and the Kuril Islands, according to the JMA. The storm has also left more than 430,000 homes in the Tokyo metropolitan region without power, according to NHK.

Transportation has been disrupted over the weekend, with the Japan Times reporting that rail and airport service has been cancelled in the affected areas until deemed safe. NPR reported that All Nippon Airways grounded all domestic flights coming out of the Tokyo region on Saturday, and the Japan Times reported that Central Japan Railway Co. canceled all shinkansen, or bullet train, service on Saturday.

The storm has also forced the cancellation of Rugby World Cup games as the event approaches the quarterfinals. Two games have already been cancelled, and the Scottish Rugby Union has threatened legal action if its game with Japan is cancelled, not rescheduled, which would advance the Japanese team and send the Scots home.

Typhoon Faxai ripped through Tokyo about a month ago, killing three and injuring 147 after it made landfall in Chiba prefecture. The Japan Times reported that the Abe administration was heavily criticized in the aftermath of that storm for not holding a meeting of ministers before or after landfall as power outages continued in Chiba prefecture well after the storm had passed.

As Hagibis approached the Japanese mainland, Abe’s cabinet held a disaster management meeting Friday in order to act more “proactively” than with Faxai.