Syrians bury Syrian Democratic Forces fighters killed while battling Turkish forces in the town of Qamishli on Saturday. Turkey’s military says it has captured a key Syrian border town as its offensive against Kurdish fighters presses on. 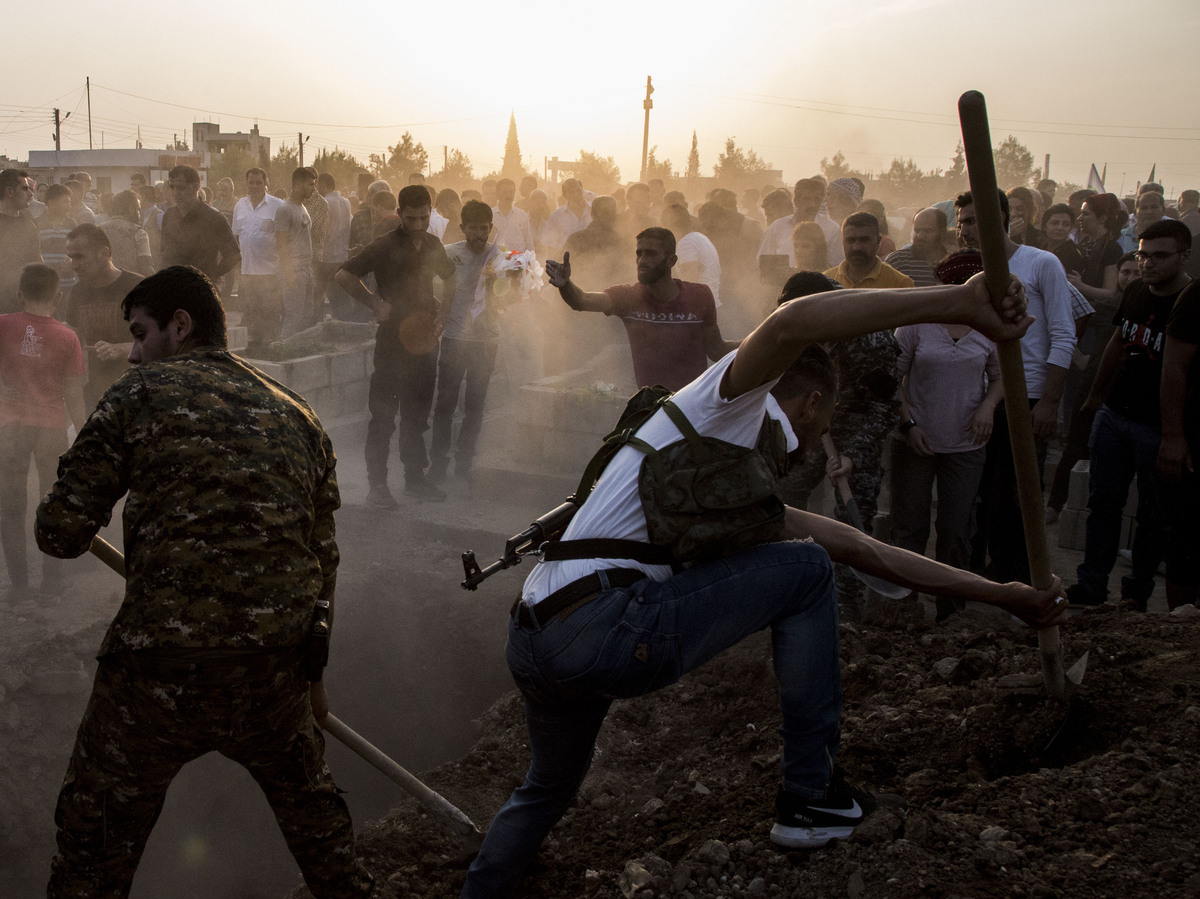 Syrians bury Syrian Democratic Forces fighters killed while battling Turkish forces in the town of Qamishli on Saturday. Turkey’s military says it has captured a key Syrian border town as its offensive against Kurdish fighters presses on.

Turkey’s defense ministry says the country’s forces have captured a Syrian border city after clashes with Kurdish-led militias. But a Syrian monitoring group said the fight was still ongoing.

Turkish officials said on state media Saturday that the strategic town of Ras al-Ayn, which sits on the northeastern part of the border, has been “brought under control.” Several surrounding villages have also been overtaken, the officials said.

But the Syrian Observatory for Human Rights, a monitoring group, told NPR the town of roughly 30,000 people had not yet been fully captured and fighting there continues. Kurdish forces also denied the town was captured.

Turkey says it launched Operation Peace Spring to wrest control of the area from Kurdish militias whom it views as a terrorists, but who have also been instrumental allies to the United States in the fight against ISIS.

In a statement, Ministry of Foreign Affairs spokesman Hami Aksoy said the objective of the latest offensive was “to establish a safe zone” so that the government can relocate millions of Syrian refugees who have been living in Turkey for years.

“As President Recep Tayyip Erdoğan stated in his last phone conversation with US President Trump, we will take over the custody of [ISIS] elements and their family members being held in detention facilities and camps in areas to be freed from terror by Operation Peace Spring,” Aksoy wrote.

The Kurdish-led Syrian Democratic Forces (SDF) warn that the attacks have revived the jihadist group. It has called on allied states to close off air space to Turkish war planes.

“The Turkish invasion is no longer threatening the revival of [ISIS], rather it has revived it and activated its cells in Qamishli and Hasaka and all the other areas,” senior SDF official Redur Xelil said in a televised statement, the Associated Press reported.

Noting car bomb attacks in Qamishli and Hasaka, Xelil said the SDF is “now fighting on two fronts: one front against the Turkish invasion and a front against [ISIS].”

The SDF has been guarding an estimated 10,000 suspected ISIS fighters in 20 prisons across the region, according to The Washington Post. On Friday, the SDF said several ISIS prisoners had escaped a facility in Qamishli after Turkey forces bombed it.

The offensive began on Wednesday after the U.S. announced it was withdrawing troops from the border, leaving Kurdish fighters exposed without military support.

The abrupt shift in U.S. policy followed a phone call between President Trump and Erdoğan that appears to have caught senior administration officials off guard. And it has led to rare criticism of the president from Republicans in Congress.

Loyal allies, including Sen. Lindsey Graham, R-S.C., lambasted Trump for the move, saying it “will be the biggest mistake of his presidency” if not reversed. Rep. John Shimkus, R-Ill., called the president’s decision to leave Syrian Kurds to fend for themselves “terrible and despicable.”

On Friday, the Pentagon said U.S. troops in the vicinity of Kobani, Syria, came under artillery fire from Turkish positions.

“The explosion occurred within a few hundred meters of a location outside the Security Mechanism zone and in an area known by the Turks to have U.S. forces present,” Navy Capt. Brook DeWalt said in a statement. “All U.S. troops are accounted for with no injuries. U.S. Forces have not withdrawn from Kobani.”

Thousands of civilians are now also caught in the crossfire. Meanwhile, the United Nations estimates about 100,000 Syrian civilians have fled the fighting.

Many ethnic Kurds are attempting to escape into Iraq, saying they’re too scared to stay in their homes.

As night fell at an Iraqi border crossing on Friday, an unnamed Kurdish woman told NPR that the deluge of bombings make it impossible to sleep. “My children, they were freaking out so [we] had to escape,” she said through an interpreter.

The same night, crowds of exhausted civilians waited for hours to be allowed into Iraq. They are the lucky ones, they say, noting that hundreds of others have been turned away because they lack the required residency papers.

Jafar Said, a doctor who is among those seeking safety in Iraq, said his home town in northeastern Syria is mostly governed by Kurdish authorities.

“A disaster is going on in Rojava. And the main cause is, because America,” Said said, referring to his town.

Kurds say they feel betrayed by President Trump and the removal of American troops. And in the chaos that has ensued, people are losing track of one another.

Sevinaz Evdike, 27, said she has been going from shelter to shelter to find family members.

One of her uncles is missing, she said. He’s a Kurdish fighter and father of seven. She hasn’t heard from him since the fighting began. So she went to the morgue.

“Now at the end of the night, I was looking for my disappeared uncle … I went to the fridge of the martyrs, I couldn’t found him, but there was many martyrs,” she said.

There are conflicting reports on the number of casualties on both the Syrian and Turkish sides.

As the conflict in towns along the more than 500-mile-long border intensifies, international condemnation of Turkey’s actions is also escalating.

The Arab League called for the United Nations Security Council to “take the necessary measures to stop the Turkish aggression and (for) the withdrawal from Syrian territory immediately,” Reuters reported.

A communique issued by Arab League Secretary-General Ahmed Aboul Gheit after a meeting of Arab foreign ministers indicated the league will consider suspending military cooperation with Turkey as well as economic and investment measures.