President Donald Trump hugs the American flag before his speech at the Conservative Political Action Conference. 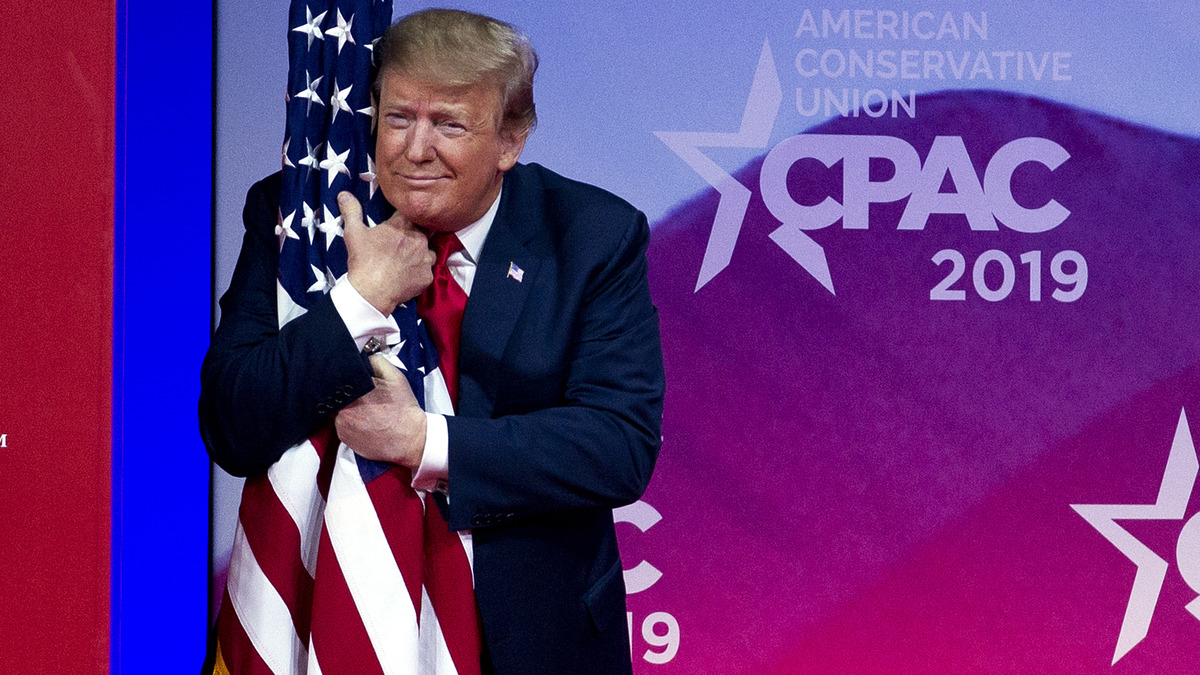 President Donald Trump hugs the American flag before his speech at the Conservative Political Action Conference.

President Trump lashed out at his political enemies in a speech to the Conservative Political Action Conference Saturday. In years past, Trump used the annual meeting of right-wing activists to rile up his base, and this year was no different. After hugging the American flag upon walking onstage, Trump spent much of his speech criticizing the investigation by Special Counsel Robert Mueller.

In remarks that went on for more than two hours, Trump also dismissed efforts at oversight by Democrats in Congress as “Bullshit.”

“They fight so hard on this witch hunt, this phony deal they put together,” Trump told the audience. “This phony thing that now looks like it’s dying. So they don’t have anything on Russia. There’s no collusion, so now they morph into, let’s inspect every deal he has ever done.”

He said the Mueller investigation is being led by people who were not elected to office, and called it a “collusion delusion.” Trump mocked FBI Director James Comey, whom he fired.

“I fire a bad cop. I fire a dirty cop, and all of a sudden the Democrats say how dare he fire him, how dare he do this,” Trump said. He also mimicked the Southern accent of his former attorney general Jeff Sessions.

The President warned the audience of a “socialist nightmare,” criticizing the “Green New Deal” environmental proposals supported by some Democrats, and mocking the potential of wind power as a source of clean energy. In his speech Trump acted out a scene of man looking outside, saying, “Darling, is the wind blowing today? I’d like to watch television, darling.”

He also devoted part of his speech to foreign policy, including the ongoing trade war with China. “It wasn’t America first in many cases. It was America last. Those days are over, long over,” Trump said.

“President Xi in China, we have great respect, we have a great relationship. I say, how is it possible, that you got away with this, for so long? And he said, because nobody asked us to change.” He noted that China increased tariffs on American products by up to 40 percent, without pushback from the U.S. until now. “We should have been doing the same thing to them but we didn’t. It’s hard to believe.”

Trump also talked about his recent summit in Vietnam with North Korean leader Kim Jong Un. “I had to walk, because every once in a while you have to walk,” Trump said of the talks. “Because the deal wasn’t a deal that was acceptable to me. I don’t like these deals that politicians make. They make a deal for the sake of doing it. I want to make a deal that works. But the one thing we have done: we have no testing, no missiles going up, no rockets, no testing.”

The summit, his second with Kim, concluded with North Korea no closer to denuclearization.