A protester holds a photo of Stephon Clark during a Black Lives Matter protest in Sacramento on March 22, 2018. 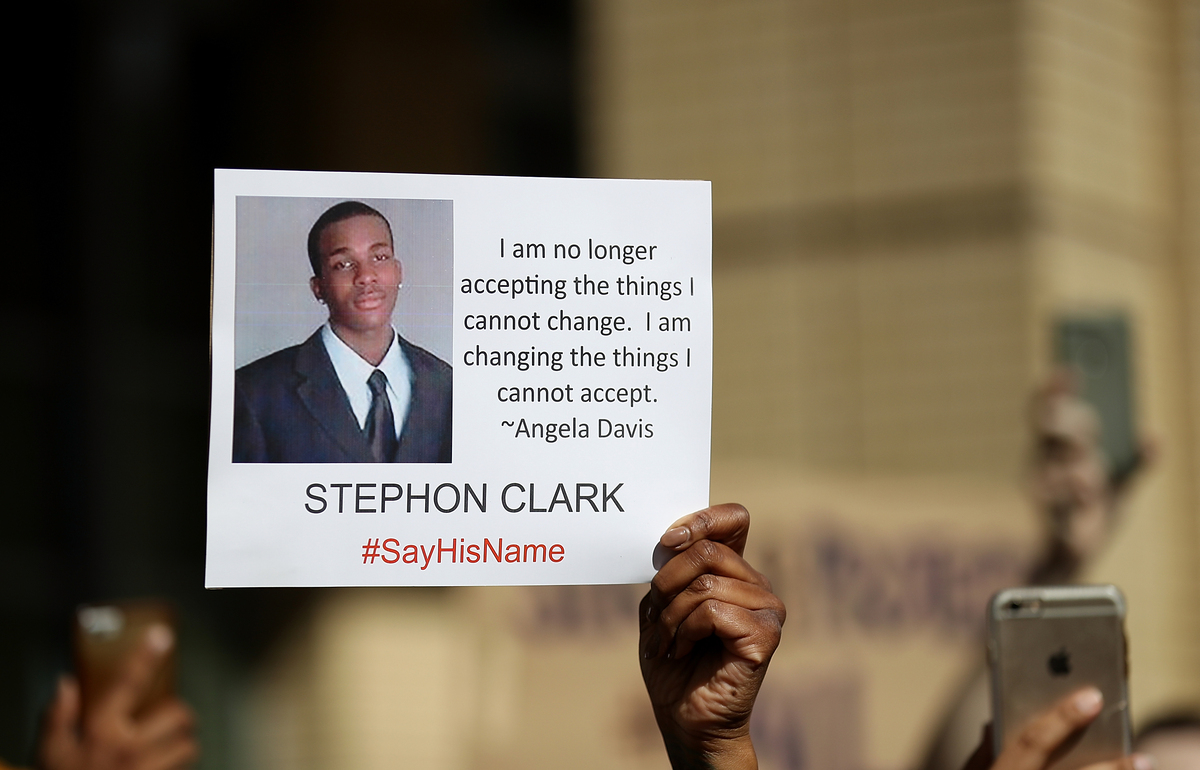 A protester holds a photo of Stephon Clark during a Black Lives Matter protest in Sacramento on March 22, 2018.

Nearly a year after Sacramento police fatally shot Stephon Clark, a 22-year-old unarmed black man who died in his grandmother’s backyard, District Attorney Anne-Marie Schubert announced during a Saturday press conference that the two officers who killed him will not face criminal charges.

Clark was killed March 18 after Sacramento police responded to a 911 call of a man breaking car windows in the South Sacramento neighborhood of Meadowview. Two officers pursued Clark into a backyard — which they later learned was his grandmother’s home — where they fatally shot at him about 20 times.

After the shooting, the officers said they thought Clark had a gun, but they only found a cellphone.

On Saturday, Schubert presented her office’s review of the case, which came to the conclusion that the two officers, who she identified as Jared Robinet and Terrence Mercadal, “honestly, without hesitation, believed he had a gun,” Schubert said.

His death sparked weeks of demonstrations and immediate calls from the Clark family and activists for the district attorney to bring criminal charges against the officers. Protesters with the local Black Lives Matter chapter have gathered in front of the DA’s office each of the past 49 weeks, demanding that the officers be held accountable.

The Clark family filed a wrongful death lawsuit against the city this past January, seeking more than $20 million. That suit is ongoing.

The district attorney’s announcement on Saturday not to charge the officers is based on a review of the Sacramento Police Department’s own investigation into the shooting, which was completed in October.

California Attorney General Xavier Becerra’s office is conducting an independent review of the Clark case at the request of Sacramento Chief of Police Daniel Hahn.

In anticipation of the DA’s announcement, stakeholders across Sacramento — from social-justice activists to the Clark family — have been preparing for months, fearing it could plunge the city into demonstrations and possibly riots.

On Friday, at a special afternoon meeting inside city hall, leaders from Sacramento’s black community gathered with Hahn, Mayor Darrell Steinberg and others to discuss plans for how to respond to the DA’s announcement.

The city is also bracing for unrest. At the state Capitol on Friday, the Senate and Assembly sergeants-at-arms sent memos advising lawmakers and employees to “avoid coming into the Capitol” over the weekend in anticipation of “increased crowds and traffic that may occur in and around the downtown Sacramento area as a result of the announcement.”

Last March, after the police department released video footage from the Clark shooting, demonstrators spilled into Sacramento’s streets, shutting down a freeway and blocking thousands of fans from entering a Sacramento Kings game.