Rep. Ilhan Omar, D-Minn., became the focus of a heated argument at the West Virginia statehouse on Friday, after an anti-Muslim display in the rotunda juxtaposed her photo with the Sept. 11 terror attacks. 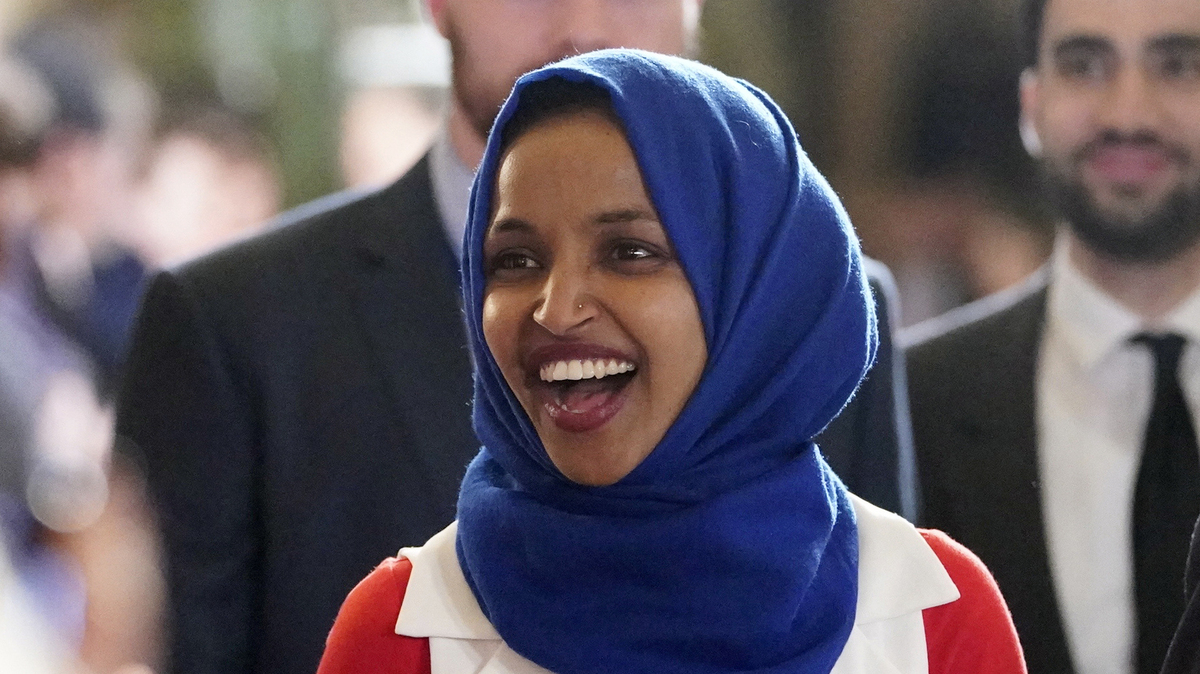 Rep. Ilhan Omar, D-Minn., became the focus of a heated argument at the West Virginia statehouse on Friday, after an anti-Muslim display in the rotunda juxtaposed her photo with the Sept. 11 terror attacks.

A day after a sign at an event sponsored by the Republican Party of West Virginia linked one of the first Muslim women elected to Congress with the Sept. 11 terrorist attacks, the head of the state GOP is putting distance between the party and the poster.

The sign led to a spat, an injury, an official’s resignation and potential disciplinary action against a lawmaker.

It sat on display outside the House of Delegates chamber on Friday during a series of events around the state capitol for West Virginia’s GOP Day. The poster featured a photo of New York’s World Trade Center, ablaze on Sep. 11, 2001 with a caption that read “‘NEVER FORGET’ – YOU SAID..” Just below that was a photo of Rep. Ilhan Omar, D-Minn., who wears a hijab. The caption attached to that image read, “I AM PROOF – YOU HAVE FORGOTTEN.”

On Saturday, State Republican Party Chairwoman Melody Potter said the display was not affiliated with the party in any way.

“The West Virginia Republican Party does not approve, condone, or support hate speech,” she said in a statement. “One of the exhibitors at our West Virginia Republican Party Day at the Capitol displayed a sign that we did not approve, were not aware of before the day started, and we do not support.” The party immediately asked the exhibitor to take the sign down, Potter said.

West Virginia State Senate President, Republican Mitch Carmichael, also denounced the sign. “We must be strong in our resolve to stand up and speak out against fear and hatred when we see it, and we absolutely condemn the kind of behavior that was on display in our own State Capitol,” he said in a statement.

Others in the party pointed to the First Amendment when discussing the matter.

“While I may not agree with everything that is out there, I do agree that freedom of speech is something we have to protect,” Del. Dianna Graves said.

West Virginia Democratic Party Chairwoman Belinda Biafore described the poster on Friday as “just the latest display of hate from the Republican Majority this Legislative Session.”

When the House floor session began, Democrats expressed outrage over the poster. “It’s ugly; it’s hateful; and there’s absolutely no place for it in American politics,” said Del. Mike Pushkin, according to WV News.

Del. Mike Caputo, the House minority whip and a Democrat, admitted to kicking open the chamber doors out of anger, an act that reportedly injured a doorkeeper. Police are investigating and he may be discipline, WV Public Radio reports.

The poster was placed directly beside a sign promoting ACT for America, a conservative grass-roots group that bills itself as “the NRA of national security.” The Southern Poverty Law Center has called the organization an anti-Muslim hate group.

The group said it had nothing to do with the controversial signage.

“This was NOT an ACT for America display,” it said in statement released Saturday. “While we find many of the views and actions of Congresswoman Ilhan Omar to be reprehensible, the display in the Capitol rotunda would have never been approved by our National Office.”

A video posted Friday by the West Virginia Democratic Party that appears to have been taken at the exhibit shows an unidentified woman standing in front of the poster wearing a shirt with an ACT for America logo. “I am the one who put it up, yes,” she says to the man taking the video. “It’s a public place, and that’s why I’m free to bring it,” she adds. Asked whether she believed the sign is racist, she replies, “No I don’t.”

She can be heard saying she won’t discuss the sign anymore and concludes by holding a cup and declaring, “Have a nice day, l’chaim,” a Hebrew toast meaning “to life.”

It was Friday afternoon when Omar responded to the poster on Twitter. “No wonder why I am on the ‘Hitlist’ of a domestic terrorist and ‘Assassinate Ilhan Omar’ is written on my local gas stations,” she said.

Omar fled war in Somalia and is the first refugee elected to Congress. She faced renewed accusations of anti-Semitism this week following a conversation about Israel on Wednesday night in Washington. “I want to talk about the political influence in this country that says it is okay to push for allegiance to a foreign country,” she told supporters in a cafe.

Rep. Eliot Engel, D-N.Y., the chairman of the House Foreign Affairs Committee, said she invoked a “vile anti-Semitic slur” by questioning “the loyalty of fellow American citizens because of their political views, including support for the US-Israel relationship.”

Earlier this month, Omar was criticized by both Republicans and Democrats for spreading an anti-Semitic stereotype on social media about members of the Jewish faith, money and power. She apologized “unequivocally.”