Plastics Or People? At Least 1 Of Them Has To Change To Clean Up Our Mess

A discarded plastic bottle lies on the beach at Sandy Hook, N.J. Packaging is the largest source of the plastic waste that now blankets our planet. 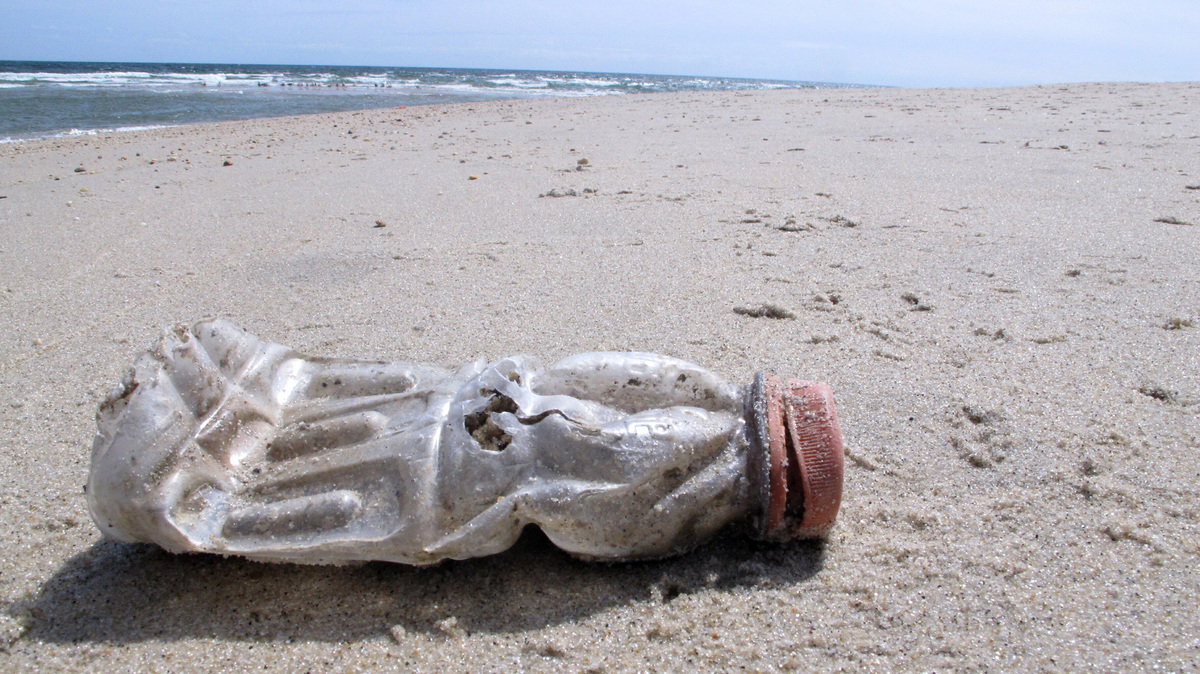 A discarded plastic bottle lies on the beach at Sandy Hook, N.J. Packaging is the largest source of the plastic waste that now blankets our planet.

The avalanche of plastic waste that’s rolling over land and sea has inspired numerous potential solutions. Some involve inventing our way out of the mess by creating new kinds of natural materials that will harmlessly degrade if they’re thrown away.

Others say it might be quicker to change people’s throwaway behavior instead.

Among the first group is Stephen Mayfield. He’s a chemist who figured out how to turn various kinds of algae into raw plastic — polyurethane plastic. Then he turns it into stuff people want.

“What are the most important polyurethane products on the planet?” he asks. “Well, if you are from UC San Diego, they’re surfboards.”

Mayfield is a lifelong surfer whose lab in San Diego is walking distance from the beach. He works out of what looks like a machine shop on the University of California campus. His surfboards got him some attention (the mayor of San Diego has one), but that’s not what he really wants to make.

It was a surfing trip to the Maldives islands in the Indian Ocean that persuaded him to focus on something else. One day, he asked his local hosts to take him to their most remote island. “And when I got to the windward side of the island, it was covered with dead flip-flops,” Mayfield recalls.

Flip-flops are the footwear for much of the world’s population. They’re made by the billions every year, mostly from various forms of rubber or plastic. The pile Mayfield saw in the Maldives had floated there on ocean currents from, presumably, all over the world. “And it was so sad to get there and think this is really … what we’ve done to the planet?” he says ruefully.

So Mayfield now makes flip-flops from algae grown in tanks. What makes them special is that they degrade if left out in the environment.

Replacing flip-flops is a personal mission, says chemist and fellow surfer Suri Sherman, who is the “polyurethane chef” in Mayfield’s lab. “I’ve traveled all over the world just to surf,” he says, “and I have family in India, so I’ve been out there a bunch of times. Everywhere you go there is trash all over the place, and a lot of it is flip-flops.”

Sherman starts with algae-based polymers, called polyols, then adds a catalyst and other polymers and chemicals in a gooey concoction not unlike a two-part epoxy mix. “It’s just kind of like cooking,” he says. The soupy mix goes into a mechanical spinner and then into a mold, where it’s heated for about half an hour. When it’s done, he pries it out — a bio-based polyurethane flip-flop sole.

Mayfield says there’s some traditional petroleum-based polymer in there, too. But all of the shoe will biodegrade into harmless materials. It just needs the right bacteria and moisture to break it down. “You throw them in your compost pile and they will disappear at about 3.5% to 4% per month,” he says, “meaning that within about two years that shoe will completely be gone.”

Potentially two years as trash isn’t perfect, but Mayfield says it’s better than decades or even longer. The real problem, he says, is that new technology is a tough sell. Manufacturers are reluctant to take a risk on a new, unfamiliar product. “I cannot convince them,” he says. “The only thing that can convince them is the market.”

And the market is usually determined by what consumers want. So, what about changing people instead of the product? Changing their behavior, that is.

That’s Tom Szaky’s strategy. “I think the evil isn’t plastic — it’s using something once,” he says.

Szaky is founder and CEO of TerraCycle, in Trenton, N.J. He says the throwaway culture in the U.S. took shape in the mid-20th century. “There were advertisements in 1950 that talk about, ‘You don’t have to wash the dishes anymore, simply take the whole thing, — the cutlery, the dishes, the tablecloth itself — and throw it all out,’ ” he says. That disposability was made possible in large part by the invention of cheap plastic.

Szaky wants consumers to abandon the throwaway mentality and learn — or relearn — to reuse things, especially packaging, which is the largest source of plastic waste.

TerraCycle is a recycling company that’s running a pilot project called Loop. Here’s how it works: A company puts its products — say, shampoo or toothpaste — into custom-made, sturdy containers made of glass, metal or plastic. Loop packs the products into a picnic-basket-size tote bag and ships it to you. You use up the stuff, then UPS picks up the tote bag full of empties and ships it back to TerraCycle. The containers get washed, sent to consumer product companies for refilling and are sent out again to consumers.

TerraCycle’s Heather Crawford stands next to boxes of tote bags for a pilot project called Loop. The bags are filled with products in reusable containers and mailed to customers, who then return the bags and empty containers to be cleaned and refilled. 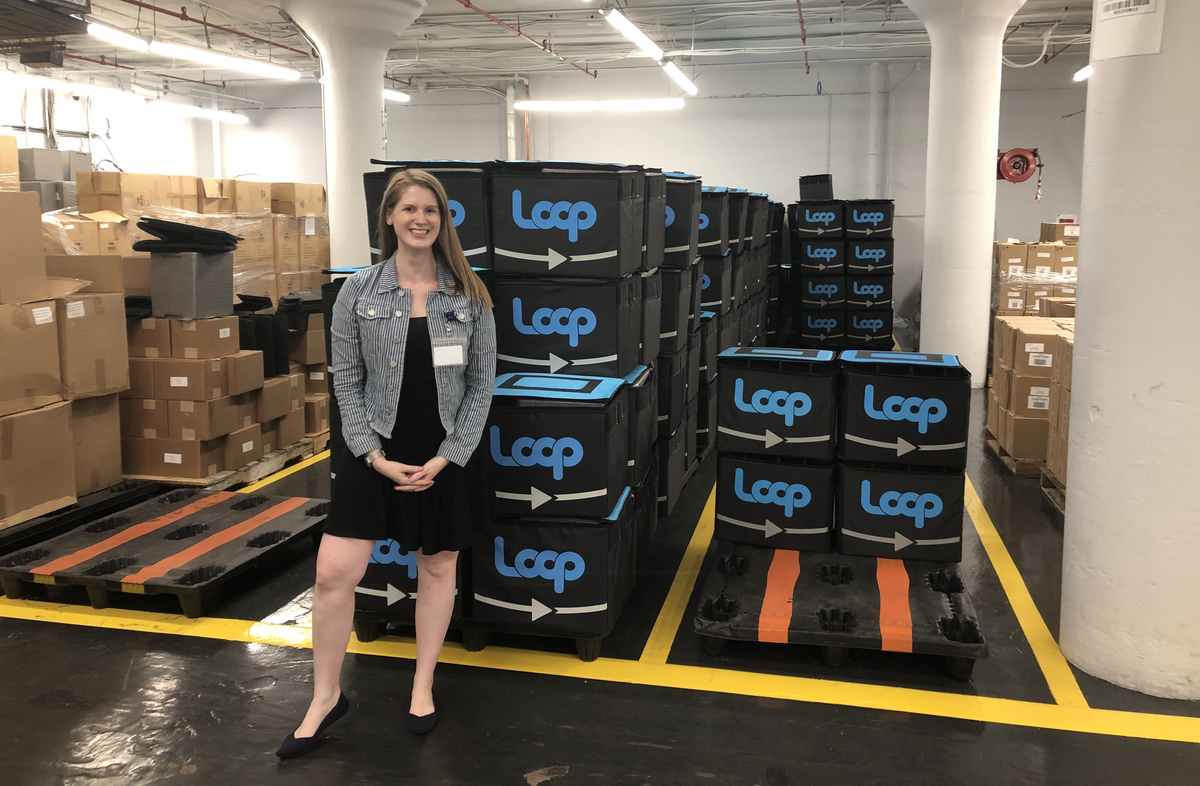 TerraCycle’s Heather Crawford stands next to boxes of tote bags for a pilot project called Loop. The bags are filled with products in reusable containers and mailed to customers, who then return the bags and empty containers to be cleaned and refilled.

Szaky says it isn’t the only solution to plastic waste, but it’s an inroad. He says he wants to encourage “unconscious” behavior change in consumers. “In Loop, we’re trying to say [that] it feels like throwaway,” he says, “but instead of throwing it away into a landfill or throwing it away into a recycling center, it’s going into a reuse facility.”

That facility is in a warehouse in Trenton. Boxes of consumer products line the walls. Heather Crawford, TerraCycle’s vice president of marketing and e-commerce, pulls out a sleek, metal cylinder with a brand label on the front.

“Snacks, trail mixes, raw nuts,” she says, noting they’re packed in metal instead of the usual plastic pouch. There’s containers of balsamic vinegar, shampoo, hand lotion and juice, either in glass or heavy duty, reusable plastic. There’s even a refrigerator with Häagen-Dazs ice cream in special insulated metal containers, frozen to minus 41 degrees Fahrenheit so it will stay that way for up to 30 hours. “That’s the very last thing to go into the tote” before it’s shipped out, Crawford says.

In TerraCycle’s Loop pilot project, products ranging from shampoo to ice cream are put in reusable containers like this metal cylinder and then sent to customers to use the goods and return the empties.

Tens of thousands of people have signed up to buy products this way, Crawford says, though far fewer are actually being served so far — the operation started last May and is still gearing up. Big companies such as Procter Gamble, Nestlé and Unilever are participating in the experiment, and they refill the containers with their products while Loop handles the delivery and cleaning. Customers pay a deposit on each container, which they get back when they turn it in.

Crawford says she visits customers in their homes to see how they feel about it. “I think consumers are so well aware of the waste crisis,” she says. “But they don’t know how to solve it themselves,” she adds, “and they are genuinely looking for a solution and something that they can actively participate in.”

“Who are the losers in Loop?” he says. “It’s the waste management industry, because less stuff will end up in their bins, which will make their income go down.” And it’s also the oil, gas and chemical industries that now manufacture billions of dollars’ worth of plastic stuff, from food packaging to flip-flops, and have plans to increase their production of plastic.

Ultimately, Szaky says, it will be the consumer who determines the future of plastic.