TSA wants to remind passengers that rocket launchers and other military paraphernalia are not permitted in checked or carry-on bags, even when the weapon in question is not a live device. 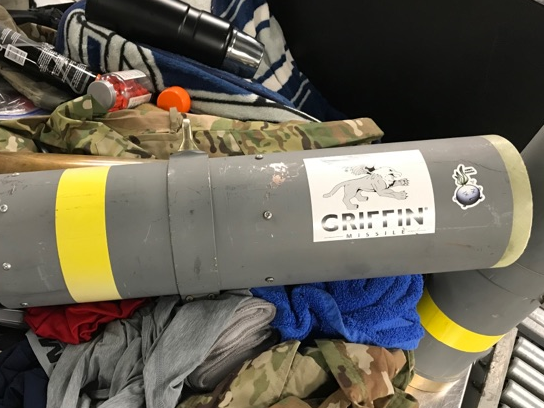 TSA wants to remind passengers that rocket launchers and other military paraphernalia are not permitted in checked or carry-on bags, even when the weapon in question is not a live device.

Nothing says “I’ve been to Kuwait!” like a missile launcher keepsake.

At least that seems to be the explanation one Texas man provided officials at Baltimore/Washington International Thurgood Marshall Airport after they discovered the device in his checked luggage.

Transportation Security Administration found the be-stickered gray, yellow and black Griffin missile launcher during a routine baggage screening, according to a statement. The agency says airport police eventually tracked down the unnamed man from Jacksonville, Texas, and that he told authorities he is an active-duty member of the U.S. military.

“Man said he was bringing it back from Kuwait as a souvenir,” TSA spokeswoman Lisa Farbstein wrote in a tweet.

Turns out, that’s not allowed. Military weapons are not permitted in checked or carry-on bags, even when the weapon in question — like the item snugly tucked inside the man’s suitcase — is not a live device.

“Perhaps he should have picked up a keychain instead!” Farbstein added.

Eventually, the inert rocket launcher was confiscated and handed over to the state fire marshal for safe disposal and the man was permitted to catch his flight.

They Brought What? is a TSA video series that highlights items people try to take through airport screening.

TSA discovers so many “strange, weird and dangerous” items in checked and carry-on luggage that the agency maintains an Instagram account and a They Brought What?! YouTube channel to highlight some of the more bizarre items.

One video of the Top 10 most Unusual Finds of 2018 includes a spear gun, a bag of snakes, a cartoonish-looking homemade bomb with sticks of fake dynamite taped to a clock radio, a pair of tuxedo-painted grenades and, in the No. 1 spot, a Freddy Kruger-style bladed glove.

TSA encourages anyone with questions about what they can or can’t bring on a plane to ask for guidance through any one of the agency’s social media accounts.