In France, The #MeToo Movement Has Yet To Live Up To Women’s Hopes

French Culture Minister Françoise Nyssen (second right), Paris Mayor Anne Hidalgo (center) and women’s rights activists hold a banner reading “Maintenant on agit” (“Now we act”), on the eve of International Women’s Day on March 7. They aim to raise funds to help women pursue justice, “so that no woman ever again has to say #MeToo.” 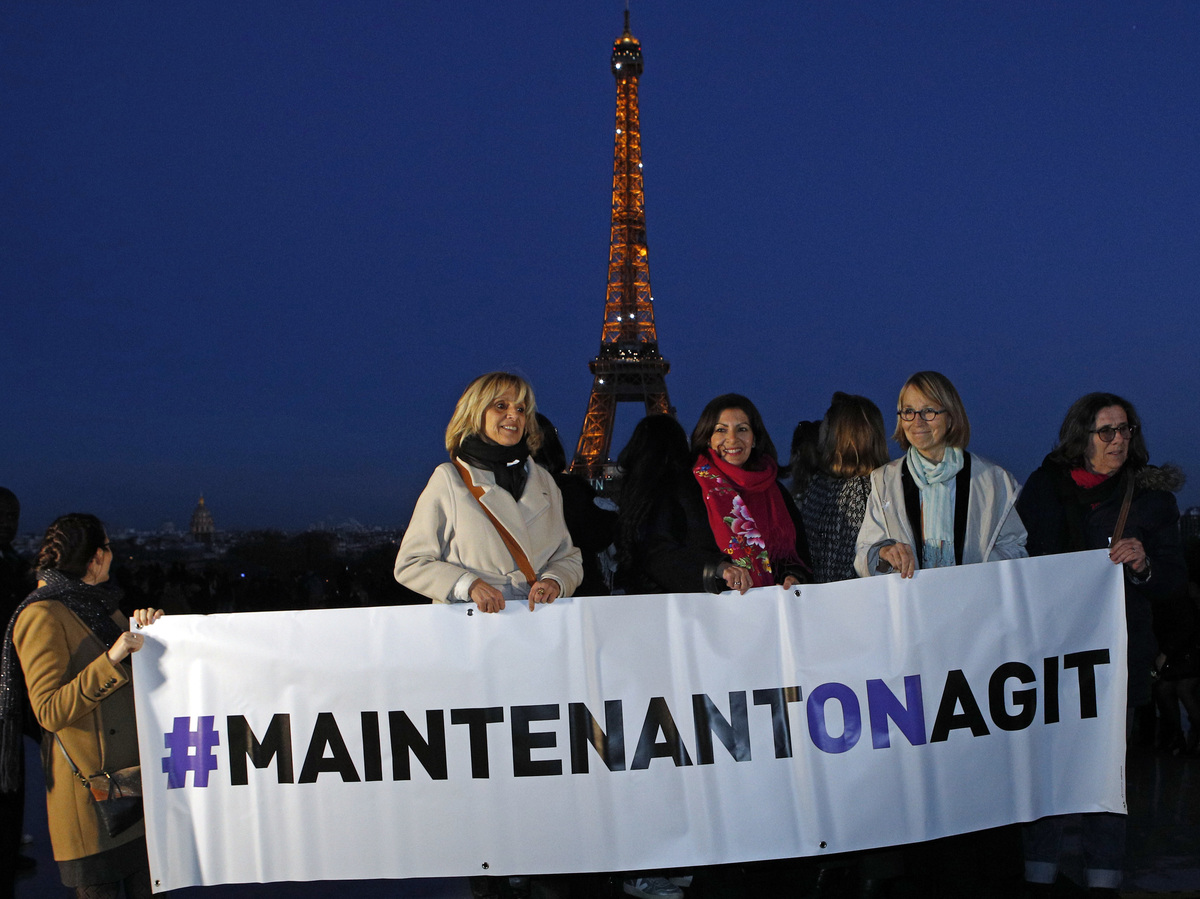 French Culture Minister Françoise Nyssen (second right), Paris Mayor Anne Hidalgo (center) and women’s rights activists hold a banner reading “Maintenant on agit” (“Now we act”), on the eve of International Women’s Day on March 7. They aim to raise funds to help women pursue justice, “so that no woman ever again has to say #MeToo.”

As a budding young soprano in the 1990s, Anne-Sophie Schmidt was selected to sing the lead role in an opera conducted by the renowned Swiss conductor Charles Dutoit and the National Orchestra of France. It was a great honor to work with Dutoit, she says.

But then the harassment started.

After one concert, Schmidt says, Dutoit pushed her up against a wall and forcibly kissed and groped her.

“At first, I just tried to brush it off and I took my distance from Dutoit,” Schmidt says. “But I had the leading role, so I had to work with him very closely on breathing and tempo. He understood I was trying to rebuff him and he began being really nasty, trying to humiliate me in front of the orchestra by saying things like I was singing off-key.”

Schmidt, then 29, called her husband to attend every rehearsal and performance. She says this so enraged Dutoit that he fired her.

She did not think about protesting or filing a complaint, she says, because in the 1990s, no one would have believed her or cared.

“France has clearly not had its reckoning”

Today, France is still coming to grips with how to acknowledge and prevent sexual harassment and abuse of women.

The government now has an outspoken gender equality minister, Marlène Schiappa, who pushed through a law to punish harassment in the street with fines of up to 750 euros (close to $840). Schiappa announced last month that courts have handed down nearly 450 fines in the past eight months.

Where women’s equality is concerned, the country presents a mixed picture: Studies suggest France has the highest percentage of women in the workforce in Europe and the country seems to set women up to succeed.

Mothers are able to go back to work if they choose, because of the country’s good day care system. And universal public schooling begins at age 3.

Yet the gender pay gap persists: French women earned 15.2% less on average than French men in 2016, according to the European Union’s statistics agency.

Overall, many women in France feel the #MeToo movement has fallen short of what they hoped for.

Consider what happened after Schmidt’s experience with Dutoit. In late 2017, several women around the world came forward and accused Dutoit, now 82, of engaging in harassment over a 20-year period. Schmidt spoke out publicly for the first time, in January 2018, adding her voice to theirs.

But in February, the National Orchestra of France brought Dutoit back, after its principal conductor took ill, for a highly anticipated performance of Berlioz’s The Damnation of Faust.

Schmidt says it was like a “slap in the face.”

Marlène Schiappa, named gender equality minister by French President Emmanuel Macron, said in April that nearly 450 fines had been handed down to punish harassment on the street. 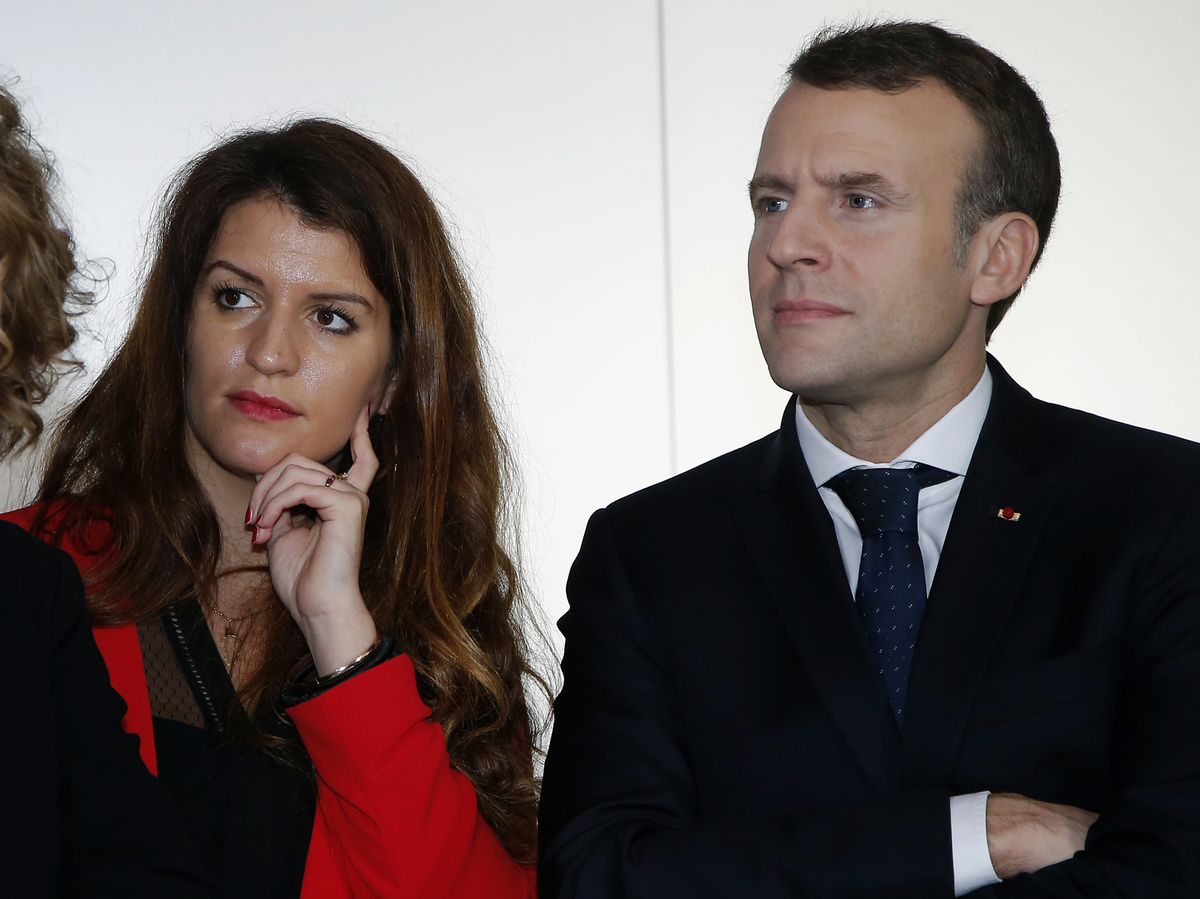 Marlène Schiappa, named gender equality minister by French President Emmanuel Macron, said in April that nearly 450 fines had been handed down to punish harassment on the street.

“It’s scandalous when you see that in France, and with the same orchestra, we hire an old man who is accused of sexual abuse by more than 10 people,” she says. “Yet we bring him back against the wishes of the orchestra. France has clearly not had its reckoning when it comes to sexual harassment. This country thinks to put your hand on a woman’s breast is normal.”

Dutoit has denied all of the accusations against him. This month, he is set to begin a new stint as principal guest conductor for Russia’s St. Petersburg Philharmonic Orchestra.

The #MeToo movement in France went by the much angrier hashtag #BalanceTonPorc or “out your pig.” The expression was coined by New York-based French journalist Sandra Muller.

“In France, when a woman speaks out, she’s seen as a liar or maybe hysterical,” she says.

Muller says it’s hard to change the mentality in France. She points to the example of film producer and director Luc Besson, 60, accused numerous times of sexual aggression and even rape by actresses and other women. Besson denies the accusations and continues to work. But one of his accusers filed rape charges a second time after a judge dismissed her first charges. The case is still ongoing.

Beyond this, French women have sometimes been unsupportive of others who’ve been abused. Last year, a group of prominent figures — including actress Catherine Deneuve — penned an open letter, saying the #MeToo movement had gone too far. They said men should have the right to be men. (Deneuve later apologized.)

France had its first major reckoning with sexual misdeeds of the powerful in 2011. Dominique Strauss-Kahn, then head of the International Monetary Fund and seen as a strong contender to become France’s president, was accused of sexually assaulting a New York City hotel housekeeper. The charges were dropped after Strauss-Kahn and the hotel worker, Nafissatou Diallo, came to an agreement.

The scandal divided France, and many discovered for the first time the harassment women have to deal with, even from seemingly respectable men.

“The excuse we hear in France is that we have the French seduction type. And that you can’t say to men that they can’t seduce women, because it’s in our culture and our tradition and blah, blah, blah,” says Isabelle Attard, a former member of parliament.

Attard won a seat with the Green Party in 2012 and moved to Paris from Brittany. She remembers being impressed when she first met Denis Baupin, a party stalwart.

“I was the young politician who knew no one and he was the famous Green Party member, the expert,” she says.

“After just one day, I started to receive [text messages] from Baupin,” she says. “It went on for a year. And it was more than seduction. It was allusions to sexual acts. And every time during that year, I tried to readjust the conversation to professional matters, and I said ‘no’ many, many times and he never stopped.”

Attard publicized her story before the #MeToo movement broke. Several other women later joined her in accusing Baupin of misconduct, including groping and sexual harassment. Their accusations were beyond the statute of limitations, so they could not bring charges against him.

When I was younger, the word ‘conquest’ was used a lot. Men think they should try to date as many women as possible, and if she says no, you should try to break her. It becomes an ego trip.

Matthias Jambon-Puillet, of the male culture in France and elsewhere

And then something incredible happened, says Attard: Baupin sued his accusers — and the journalists who had written about the women’s experiences with him — for defamation.

“It’s very strange, because the journalists who broke the [Harvey] Weinstein scandal had the Pulitzer Prize,” Attard says. “They won a prize. And in the opposite in France — the two journalists who did the work, they are going to court.”

An end to impunity?

The women won their case at the end of April. Attard says Baupin never even showed up to the trial. She says in one way, the verdict marks the end of the impunity of the pre-#MeToo era. She hopes France’s true reckoning is yet to come.

This spring, France was shocked by revelations of a secret boys’ club of journalists that had mocked and harassed women in a campaign of online bullying. It happened a decade ago but came to light when one of the victims finally spoke out. Several of the perpetrators publicly apologized and were suspended from their news organizations.

Marketing manager Matthias Jambon-Puillet, in his early 30s, was one of the few men targeted by the online group, known as the “League of LOL.” He had tried to defend one of the women.

Jambon-Puillet says French men, like men anywhere, often abuse their power with women because they believe it’s the way they’re supposed to act.

“When you grow up, you are supposed to be charming and flirty and sexy and have lots of relationships,” he says. “When I was younger, the word ‘conquest’ was used a lot. Men think they should try to date as many women as possible, and if she says no, you should try to break her. It becomes an ego trip.”

But Jambon-Puillet thinks things are changing.

“It’s good for younger people, who are like 15 and 20, to hear about #MeToo and hear the media saying that it’s so wrong,” he says.

The #MeToo movement may not have caused an earthquake in France, says Jambon-Puillet, but it is gradually influencing a whole new generation of women and men. He says they will never put up with what was accepted before.