In Syria, Reports Of 19 Medical Facilities Bombed Since April 28

On May 6, an air strike destroyed Nabd Al-Hayat hospital in Syria’s Idlib province. 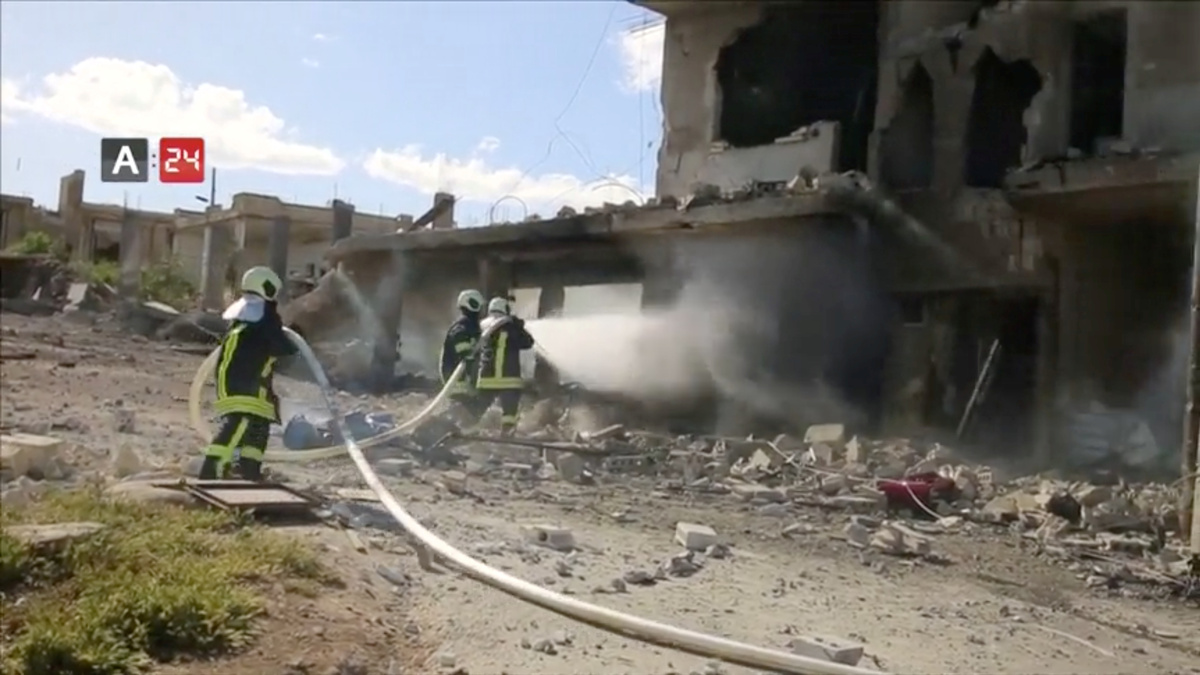 On May 6, an air strike destroyed Nabd Al-Hayat hospital in Syria’s Idlib province.

On May 15, government forces bombed the Tarmala Maternity and Children’s Hospital in South Idlib, Syria.

“The air strikes completely destroyed the facility, which had served about 6,000 people a month,” says Dr. Khaula Sawah, vice president of the Union of Medical Care and Relief Organizations-USA.

The information on the incident comes from doctors on the ground in Syria.

According to the union, it was the 19th health-care facility bombed in Syria since April 28.

Because the Tarmala Maternity and Children’s Hospital had been evacuated in the wake of this recent spate of attacks on other regional medical facilities, no one died in this particular strike, says Sawah.

But in the course of the government’s latest offensive on rebel-held territory in Idlib, which began in late April, at least 160 people have died and more than 600 have been wounded.

This spike in attacks on medical facilities is not a new tactic but represents a continuation of an ongoing strategy pursued by the Syrian government and its affiliates, says Rayan Koteiche, the Physicians for Human Rights (PHR) researcher for the Middle East and North Africa. “The Syrian government and its allies are well aware of the value of medical services to populations in need and of the impact of denying these services,” he says.

In a statement published online, Koteiche says: “PHR’s medical partners in Syria report that coordinates for at least three of the attacked facilities were shared through the UN’s deconfliction mechanism but were targeted anyway …. Many of the impacted facilities have been forced to go out of service, depriving the vulnerable civilian population of life-saving care.”

PHR has documented and mapped such incidents from the beginning of the conflict in March 2011.

As of May 14, not accounting for the latest attack, he says, in the years of the civil war “we are up to 566 individual attacks on about 350 separate [health-care] facilities.”

In addition, 890 medical personnel have been killed, some in attacks on the medical facilities where they worked.

“The main conclusion we can draw from nearly eight years of research,” Koteiche says, is that “these attacks are not unfortunate side effects of the war but have become crucial parts of the Syrian military’s strategy. In our assessment, over 90% of these incidents are attributable to the Syrian government and its affiliates, including militia and Russian allies.”

The deliberate destruction of such facilities goes against international humanitarian law, says Koteiche. He believes that keeping detailed records of each attack is critical: “This is the hope of the work that we’ve engaged in, that it will culminate in accountability.”

As a result of the intensified air and land strikes, 30 other health-care facilities in northern Syria have partially or completely suspended their activities.

“There are still hospitals in the north part of Idlib that are still functional,” Sawah says. “I can’t specify [a number] not only for security conditions but it changes by the hour due to heavy air strikes.” Ambulances and emergency personnel are also being targeted, she says, pointing to the bombing of an ambulance on May 8 in which the driver was killed.

“We have deployed five more mobile medical clinics on the ground,” she says. “But this is still not nearly enough.”

The targeting of medical facilities comes at a time when the need for care for wounded and traumatized residents is increasingly urgent. Currently, some 3 million people in the targeted region are at risk of being attacked — not just Syrians from the northern region but those who had fled north from other parts of the country in hopes of escaping the conflict.

Meanwhile, medical resources “are spread so thin” because of the attacks, says Dr. Ahmad Tarakji, head of the Syrian American Medical Society. “Physicians have been dispersed everywhere and it is almost impossible to provide services” to displaced populations.

To try to avoid or minimize damage from attacks, physicians have spread care units over several buildings, created back-up facilities and re-located clinics in caves or underground. “And the forces are still able to find and damage them,” Tarakji says. “Since hospitals serve the whole community, they know where the hospital is, it’s not secret.”

It is not likely that humanitarian groups will fill the void. Quoted in a U.N. news release on May 16, Najat Rochdi, senior humanitarian adviser to the U.N. Special Envoy for Syria, states: “The insecurity [in Idlib] and the continuing airstrikes is not something that is conducive really to deliver humanitarian assistance. And as you know, some NGOs, about 12, have suspended temporarily their assistance.”

Tarakji would like to see a resolution that will mandate a U.N. investigation of the targeting of medical facilities.

In this war-ravaged country, Tarakji says, “It’s easier to get a gun on the street than to find an antibiotic.”