A screenshot from video recently released by the Colorado Springs Police Department, which captured the moments before De’Von Bailey ran from police and was shot in the back on Aug. 3. He later died from his injuries. 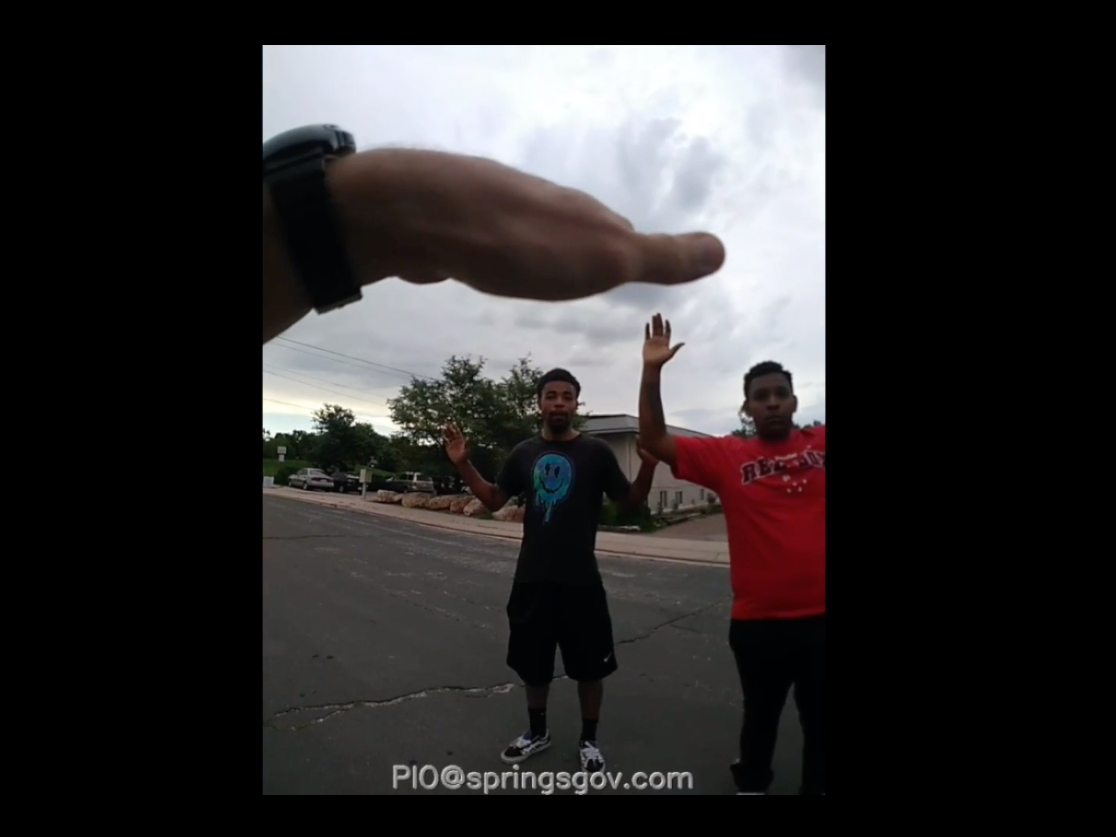 A screenshot from video recently released by the Colorado Springs Police Department, which captured the moments before De’Von Bailey ran from police and was shot in the back on Aug. 3. He later died from his injuries.

When Sgt. Alan Van’t Land of the Colorado Springs Police Department approaches two young black men in the 2100 block of Preuss Road in Colorado Springs, he tells them he is responding to a call about a possible assault.

He says the men match suspect descriptions and he has been informed one of them may have a gun.

“So don’t reach for your waist. We’re gonna just check and make sure that you don’t have a weapon. All right?” Van’t Land says, according to body camera footage released Thursday.

As another officer approaches the men, one of them, De’Von Bailey, takes off running.

“Hands up! Hands up!” the officers yell.

Then a torrent of officer gunfire is unleashed and Bailey falls to the ground.

At least eight shots can be heard on the video of the Aug. 3 incident. Bailey, 19, later died in the hospital.

According to the El Paso County coroner, Bailey was shot four times — three times in the back and a fourth time in the right arm. An autopsy declared the manner of death to be homicide.

In the immediate aftermath of the shooting, police had claimed Bailey reached for a firearm prior to running from the officers and being shot.

This is not apparent from the police video. And it’s a point underscored by Bailey family attorney Darold Killmer, who spoke to reporters on Thursday.

“Mr. Bailey was trying desperately to flee from the police and he did not have a weapon in his hand. And had not shown any weapon when he was shot in the back and killed,” Killmer said.

“The police appear to argue that they shot Mr. Bailey because they feared he was going for a gun at the time. We think the video shows otherwise.”

Killmer also reiterated to reporters that the family is calling for an independent investigation rather than having county officials lead a probe into the incident.

After Bailey was shot, Van’t Land and another officer, Blake Evenson, said they discovered “something between his legs” and then cut off Bailey’s shorts. An object can been seen in the clothing, but it was not clear from the video what it was.

“I can see the questions in their heart, I can see the thought bubbles a little bit, about why did this have to happen and it’s, of course, the tears and the moaning and the wailing is going on as an outward expression of what they’re feeling on the inside right now,” Thomas told CPB reporters.

CPB also reports the El Paso County Sheriff’s Department is leading the investigation of the case. Its findings are expected to be released to District Attorney Dan May on Friday.

According to KMGH-TV, an ABC News affiliate in Denver, both Van’t Land and Evenson are veterans of the Colorado Springs Police Department. Van’t Land has served since 2008; Evenson, since 2012.

Both officers, according to the news station, have been placed on administrative leave pending the conclusion of the investigation.