Former Texas Gov. Rick Perry takes a seat before the Senate Energy and Natural Resources Committee hearing on his nomination to be energy secretary on Jan. 19, 2017. 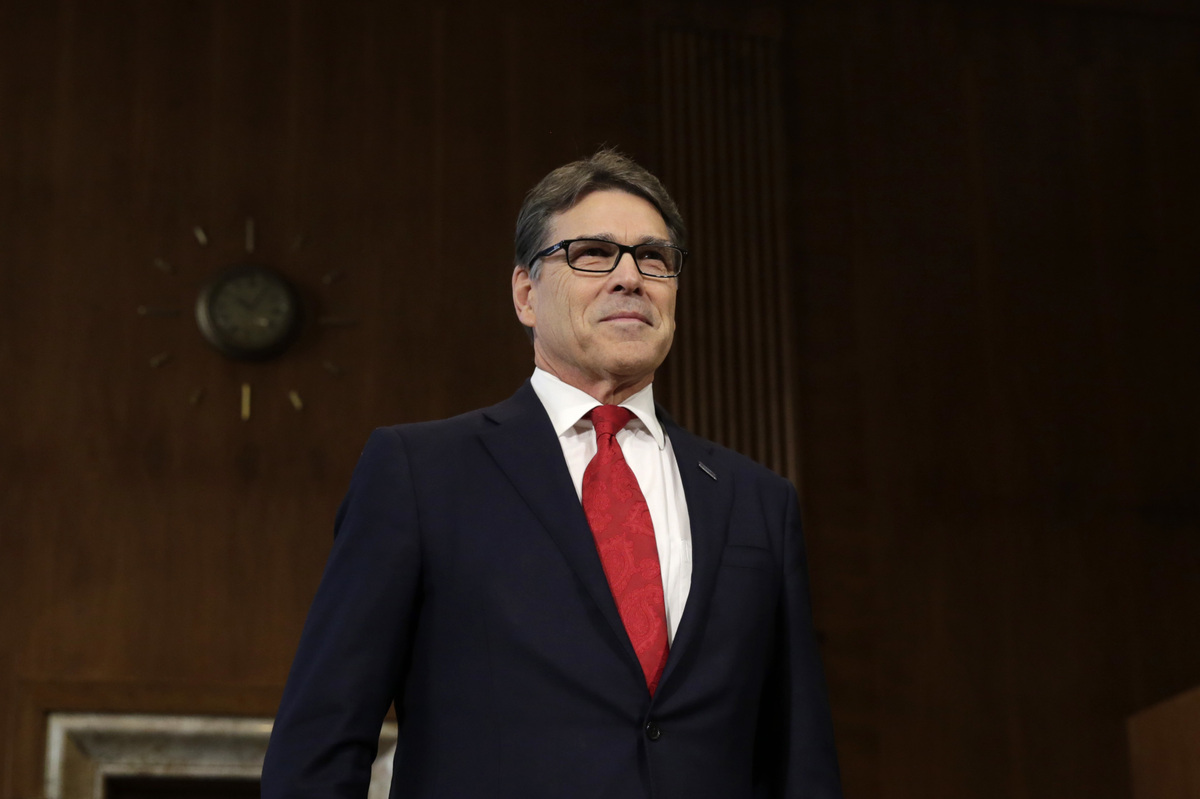 Former Texas Gov. Rick Perry takes a seat before the Senate Energy and Natural Resources Committee hearing on his nomination to be energy secretary on Jan. 19, 2017.

Secretary of Energy Rick Perry plans to leave his position at the end of the year, President Trump confirmed to reporters Thursday in Fort Worth, Texas. Trump praised Perry and said he already has a replacement in mind.

“Rick has done a fantastic job,” Trump said. ” But it was time.”

Trump said that Perry’s resignation didn’t come as a surprise and that he has considered leaving for six months because “he’s got some very big plans.”

Perry, 69, is one of Trump’s original Cabinet members and recently has emerged as a central figure in the impeachment inquiry of Trump.

Perry was part of what was dubbed “the three amigos” — in addition to Gordon Sondland, ambassador to the European Union, and Kurt Volker, former envoy to Ukraine — charged with managing the U.S.-Ukraine relationship after the White House removed the core of its Ukraine policy team last spring.

Perry says he wanted Trump and Zelenskiy to talk strengthening energy business ties between the two countries. Regarding the Biden issue, Perry told the Christian Broadcasting Network, “As God as my witness, not once was a Biden name — not the former vice president, not his son — ever mentioned.”

Perry’s name first emerged in the appendix of the whistleblower complaint that launched the impeachment inquiry. He was tapped to attend Zelenskiy’s inauguration last May.

Democrats issued Perry a subpoena on Oct. 10, seeking documents and communications connected to that trip and a series of other events related to the inquiry.

While Perry’s name is making headlines now because of the Ukraine scandal, he had a long political career before becoming energy secretary.

For just over 14 years, he was governor of Texas, the longest-serving governor of the state. He was elected lieutenant governor in 1998 and succeeded George W. Bush when he resigned to become president.

Perry twice ran for president and on the campaign trail vowed to eliminate the agency he would come to lead — although, he famously forgot the name of the Department of Energy during a 2011 debate.

Perry changed his mind about that right around the time Trump nominated him to be secretary of energy. At his confirmation hearing, Perry said he regretted ever suggesting that idea.

Trump tapped him for the job despite wilting criticism Perry delivered as an opponent during the 2016 primary campaign. At a 2015 event, Perry said Trump “offers a barking carnival act that can be best described as Trumpism: a toxic mix of demagoguery, mean-spiritedness and nonsense that will lead the Republican Party to perdition if pursued.”

As head of the Department of Energy, Perry was criticized for efforts to help the struggling coal industry. His plan to provide new subsidies to coal and nuclear power plants was rejected by the Federal Energy Regulatory Commission. Last year, a photographer said he lost his job after leaking photos of a private 2017 meeting between Perry and coal executive and Trump donor Robert “Bob” Murray. The photos show Perry hugging Murray and the coal boss handing Perry an “action plan” to help the coal companies.

Perry has repeatedly questioned the science behind climate change. Still, his home state of Texas is the largest wind energy producer in the country. For the first half of this year, more electricity was generated in the state by wind than coal, according to member station KUT.

As energy secretary, Perry’s oversight extended well beyond the country’s energy supply. The Department of Energy also oversees 17 national laboratories and is charged with keeping the country’s nuclear weapons safe.

During his tenure, Perry pushed to restart licensing of the Yucca Mountain nuclear waste storage project in Nevada. He also tried to attract more young people to the nuclear energy business, vowing to “make nuclear cool again.” Under Perry’s leadership, the agency held a series of events called the Millennial Nuclear Caucus.