A makeshift memorial of flowers and a photo of victim Heather Heyer sits in Charlottesville, Va., on Aug. 13, 2017. Heyer died when a car rammed into a group of people who were protesting white supremacists who had gathered in the city for a rally. 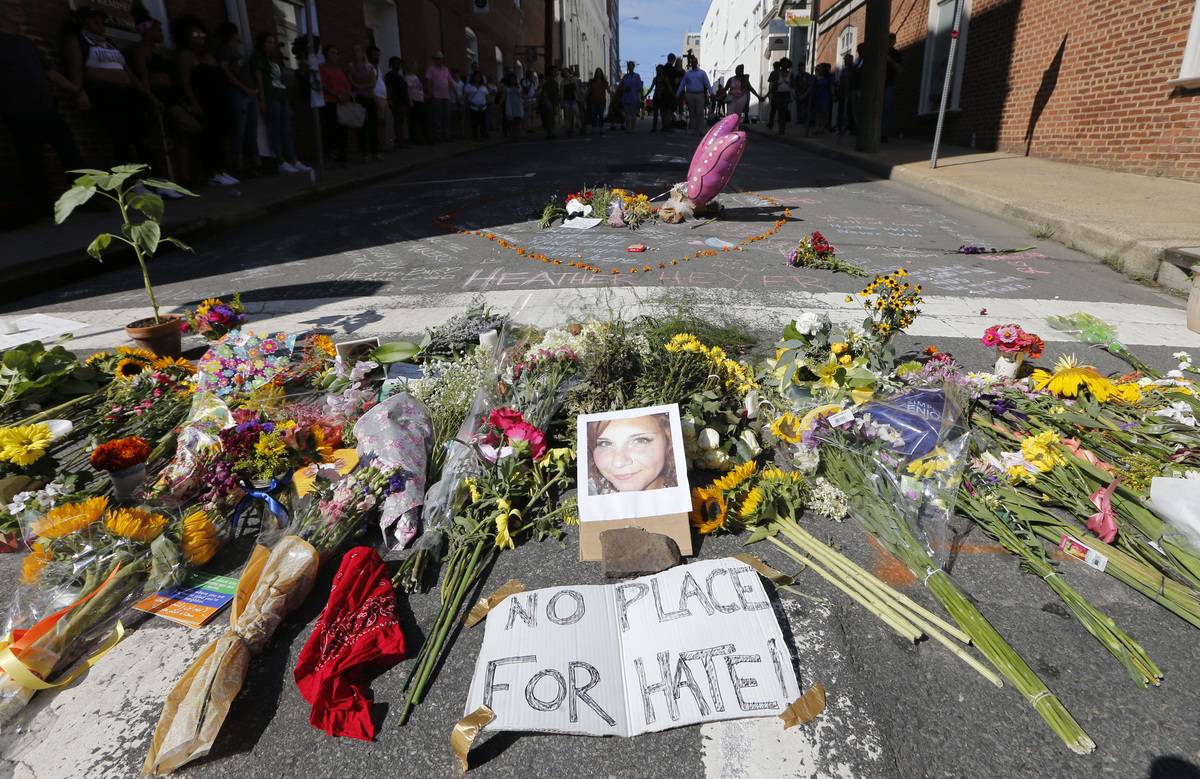 A makeshift memorial of flowers and a photo of victim Heather Heyer sits in Charlottesville, Va., on Aug. 13, 2017. Heyer died when a car rammed into a group of people who were protesting white supremacists who had gathered in the city for a rally.

Liz Sines happened to be near campus that night, so she was among the first to see the hundreds of young men who stormed the University of Virginia lawn. They marched in the darkness, tiki torches illuminating their faces as they chanted ugly slurs: “Jews will not replace us!”

Sines said the chaos of that weekend in Charlottesville, Va., two years ago this month means that some memories are blurry. Others, she said, are so vivid she couldn’t forget them if she tried. There was the fiery arrival of the white nationalists that first night; violent clashes the next day, with activists opposing them; and then the horrifying sound of a car coming down a hill and into the crowd where Sines was standing.

She realized it wasn’t an accident when she saw the driver back up to roll over more bodies.

“That’s when it clicked,” Sines said. “It very much seemed like he was going to try and kill as many people as possible.”

The Unite the Right rally in Charlottesville came to symbolize a turning point in the nation’s understanding of its racial extremism problem. Sines was a witness to that moment, and now she’s a plaintiff in an unusual lawsuit that seeks to hold the rally organizers accountable for the violence that culminated in the car attack that killed 32-year-old Heather Heyer and wounded 30 others.

The driver of the car eventually got life in prison. But what about the extremists who organized the rally? Only a handful faced criminal charges; most went unpunished. Sines and nine others who experienced the violence that weekend are suing the two dozen extremists and hate groups they say orchestrated the rally.

The plaintiffs suffered injuries, trauma, loss of work and other lingering problems from the ordeal. The defendants are leaders in the white nationalist movement, and the ultimate goal of the civil suit is to put them out of business.

The lawsuit claims that the violence associated with the rally was not spontaneous — leaked messages show that events had been meticulously planned months in advance on the social media platform Discord.

“They talked about everything, from what to wear, what to bring for lunch. For instance, they speculated on whether mayo would spoil in the sun,” said Amy Spitalnick, executive director of Integrity First for America, a nonprofit backing the lawsuit.

And, she said, organizers made clear they expected violence.

“They talked about which weapons to bring, cracking skulls and even whether they could claim self-defense if they drove cars into protesters, which is, of course, exactly what happened,” Spitalnick said.

To make their case, the plaintiffs’ legal team is reaching back — way back — to invoke a law from 1871. It’s known as the Ku Klux Klan Act, a post-slavery attempt by Congress to protect newly emancipated black people from vigilante attacks by the KKK.

“It’s not a frequently used statute in the sense that, frankly, 150 years after it was first passed, it’s stunning that we need to use it still,” Spitalnick said. “But it is exactly relevant here.”

The approach is novel — and it’s a gamble.

Jack Beermann, a law professor at Boston University who has written extensively about the KKK Act, agreed that what happened in Charlottesville is exactly the kind of racist violence that Congress wanted to prevent with the act. However, he said, the Charlottesville lawsuit faces an “uphill climb” because the Supreme Court historically has been averse to applying that law to racial violence carried out by private citizens. 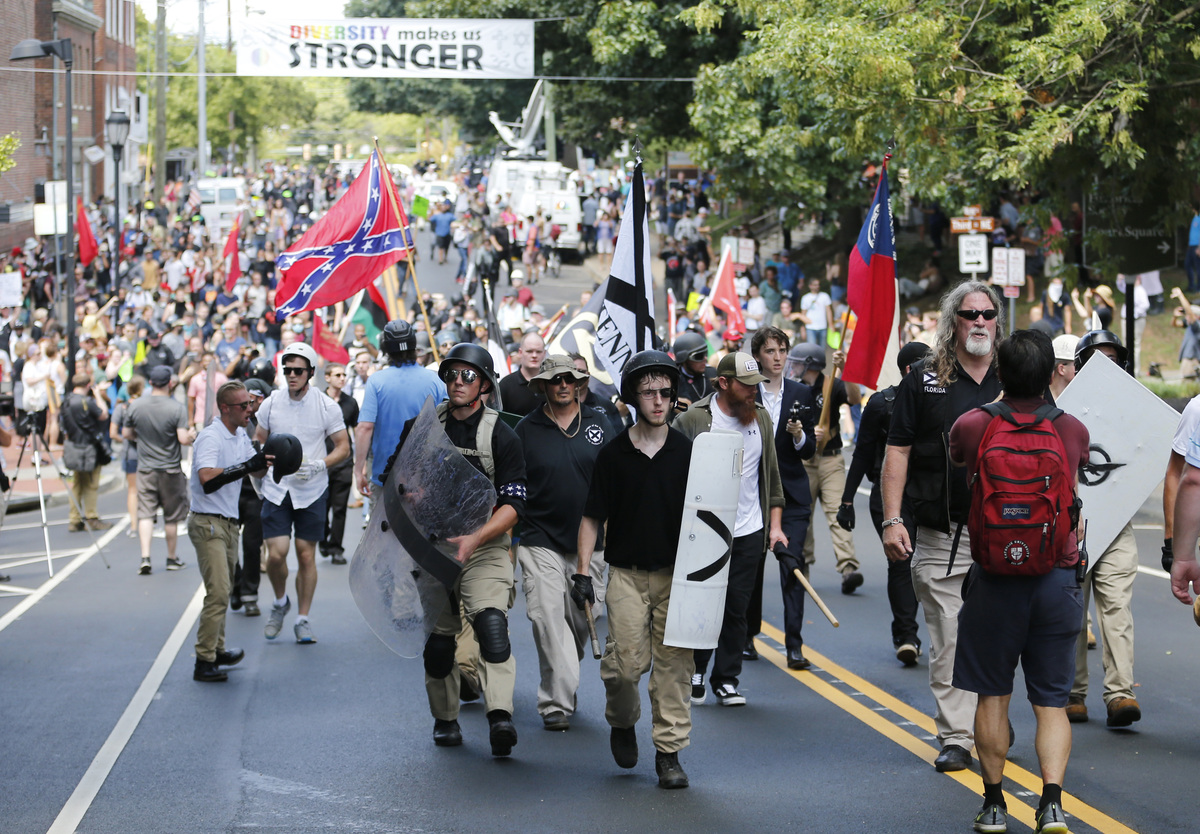 Still, Beermann said, the suit is important no matter the outcome because of the evidence it has uncovered about the workings of hate groups.

“This lawsuit has served to show that what we have is a very organized, very cohesive and very dangerous group of white supremacist organizations in the United States,” he said.

The plaintiffs’ legal team said there is “powerful” precedent for this application of the 1871 law. And so far the judge has agreed, rejecting motions to dismiss the suit and allowing it to proceed to trial based on “very persuasive guidance” from earlier cases involving similar 13th Amendment issues.

“We are confident that the law is on our side and that the men and women we represent will obtain the justice they so clearly deserve,” said the plaintiffs’ attorney, Joshua Matz, who specializes in constitutional law.

Apart from the legal questions, there are security and logistical concerns involved with going after violent neo-Nazis.

Spitalnick said calling the extremists uncooperative is an understatement. One defendant made violent anti-Semitic threats against the legal team. Others have failed to comply with the court-ordered discovery process. Even some of the defendants’ lawyers appear to have had enough; in court papers, attorneys for two extremists asked for permission to drop their clients, saying they’d fallen out of touch or had engaged in “repugnant or imprudent” conduct.

“The defendants have really gone to outrageous lengths to try to undermine this case,” Spitalnick said. “They have failed to turn over phones and computers and accounts. One even claimed that his phone fell in the toilet.”

Attorneys for the defendants didn’t respond to NPR’s requests for comment. One defendant, Kyle Chapman, representing himself, responded via email. He denied involvement and called the lawsuit a miscarriage of justice by “verminous cretins.”

Sines, the law student turned plaintiff, said the lawsuit shows a clear-cut conspiracy to sow racist violence, and she believes the judge will agree. She’s now 25, and she just graduated from law school. She’s starting a new life, in a new town she prefers not to name for security reasons.

Sines said she’s still figuring out her place in the legal profession; her experience in Charlottesville has shown her the possibilities — and limitations — of trying to change society through the courts.

“We’re using laws that are now over a century old to take down white nationalists,” she said. “Again.”