Sen. Kamala Harris will hold a distinct advantage in the 2020 California primary: she’s run and won three statewide elections, and has high name recognition among voters in the state. Harris launched her presidential campaign in Oakland on Jan. 27, 2019. 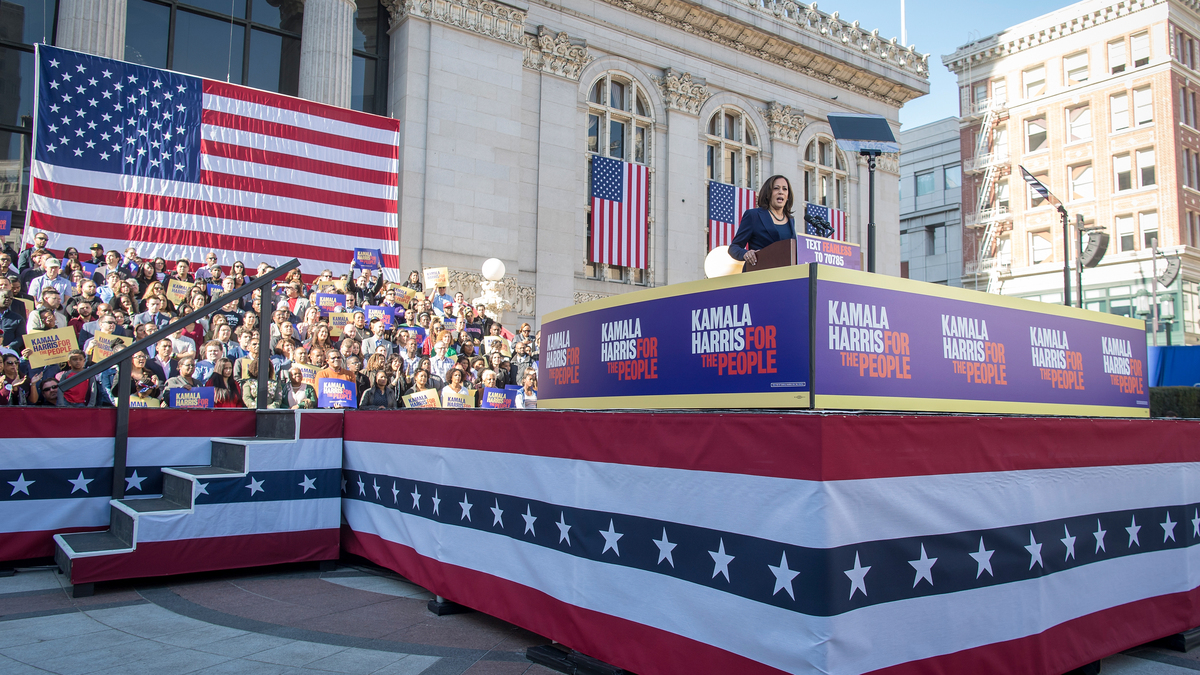 Sen. Kamala Harris will hold a distinct advantage in the 2020 California primary: she’s run and won three statewide elections, and has high name recognition among voters in the state. Harris launched her presidential campaign in Oakland on Jan. 27, 2019.

This weekend, 14 presidential candidates will converge on San Francisco for the California Democratic Party’s annual convention.

It will be the largest gathering of presidential contenders so far, and the latest sign that California’s days of bringing up the rear of the presidential primary calendar are long gone.

California will hold its primary on March 3, along with several other states that will vote in a super-charged Super Tuesday. But California will play an even more outsized role for two reasons: the fact it will award more delegates that day than any other state, and the fact that its early voting ballots will be mailed out the same day as the Iowa Caucuses.

“We are treating it like an early primary state” on the same importance level as New Hampshire, Iowa, and the other traditional momentum-setting first wave states, said Vermont Sen. Bernie Sanders‘ campaign manager, Faiz Shakir. “Campaigning there early and often, and making a strong play to try and win that state.”

California power brokers are relishing their newfound importance. “We’re excited that we matter for more than money,” said Los Angeles Mayor Eric Garcetti, who considered, but ultimately passed on, his own White House run. “Even though we’re not trained like Iowa or New Hampshire to interview all the candidates, we’re learning that culture: of being able to ask people, ‘Great. What are you going to do for us specifically here in California?'”

A boon for Kamala Harris

Harris has made repeated trips to her home state amidst campaign stops in more traditional early states like Iowa and South Carolina. She kicked off her campaign with a massive rally in her hometown of Oakland, and recently held another big event in Los Angeles, where she now lives.

In the early weeks of her campaign, Harris rolled out an overwhelming slate of endorsements from California politicians.

Still, former Sen. Barbara Boxer, whose former seat Harris now holds, says home turf advantage will be limited. “People know her better than they know, for example, Amy Klobuchar or Michael Bennet,” Boxer said, listing two other U.S. senators in the crowded primary field. “But if you look at the latest polls, she’s not leading those polls. There are others in front of her. So I think it’s wide open here and she’s going to have to fight for those votes.”

“She’s in the field, and she’s going to be a big factor, but it’s wide open,” Boxer added.

But several other presidential campaigns worry California’s massive size and prohibitively expensive TV advertising costs will lead to a race that’s anything but wide-open, and that only brand-names with big budgets will be able to truly compete.

NPR spoke to multiple presidential campaigns about the California primary, and strategists repeatedly circled back to just three candidates they think, right now, could make viable runs for the state next March: Harris, Sanders, and Biden. Several campaign advisers pointed out the obvious factor more than six months before primary and caucus voting begins: that early wins in Iowa or New Hampshire could vault another candidate to the top of that list, even as millions of California voters cast ballots early.

Buttigieg has made repeated appearances in California in recent months, mostly for big-ticket fundraising events. And many candidates are packing their weekend schedules with other forums and campaign stops, in addition to the cattle call at the state party’s San Francisco convention.

Boxer, who herself emerged from a crowded primary field when she first won the California Senate seat in 1992, said candidates will need more than money to compete there. “It’s a very issues-oriented state,” she said. “It’s not a state that just says, ‘Oh, I know her name or I know his name.’ They’re going to want to know what you’re fighting for.”

And it just so happens that many of the top California political issues are the same ones currently motivating Democrats all over the country: immigration and climate change, in particular.

Garcetti said he wants to hear more about those two topics — as well as housing affordability and infrastructure. He also made it clear he’s in no rush to commit to any particular candidate.