‘We Need To Evolve’: Police Get Help To Improve Hate Crime Tracking

University of New Hampshire police recently participated in a training on hate crimes. The police chief enlisted the help of a traveling workshop organized by two advocacy groups. 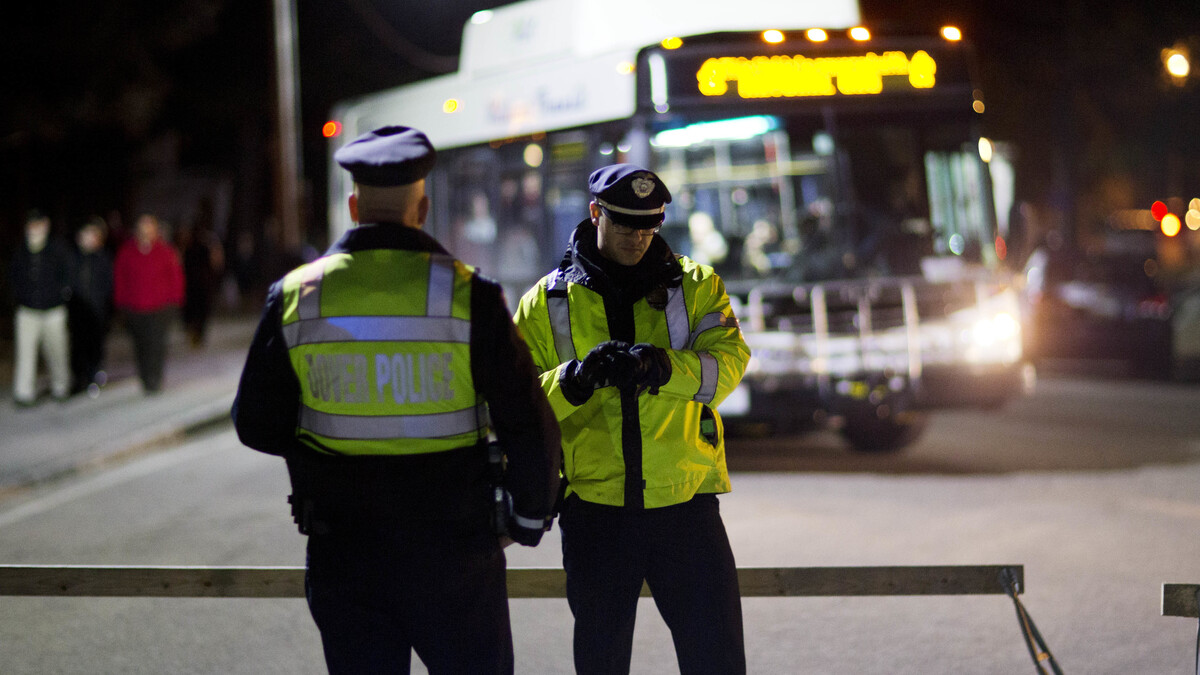 University of New Hampshire police recently participated in a training on hate crimes. The police chief enlisted the help of a traveling workshop organized by two advocacy groups.

For the picturesque college town of Durham in southeastern New Hampshire, a reckoning came in 2017.

That was the year a complaint about the cultural appropriation of Cinco de Mayo spiraled into weeks of racial unrest, a boiling over of tensions that had simmered for years at the University of New Hampshire. Students who called out racist incidents faced a backlash of online bullying, swastikas and slurs, and the vandalism of sculptures that symbolized their cause.

Student activists blamed UNH leadership for allowing the problem to fester. Their criticism was backed up by news reports that showed the university hadn’t reported a single hate incident for more than a decade before — an oddity for a campus its size.

“That time was sad,” UNH Police Chief Paul Dean said. “But there were opportunities.”

Dean was speaking from a campus auditorium this month as he welcomed guests to one of those opportunities: a hate-crime training for the university police and the Durham Police Department.

Dean and Chief Dave Kurz of Durham, N.H., where the college is located, were among the latest chiefs to enlist the help of a traveling workshop organized by two advocacy groups, the Matthew Shepard Foundation and the Lawyers’ Committee for Civil Rights Under Law. In the daylong workshop, the officers learned about state and federal laws related to bias crimes, heard from black and Jewish activists who’ve had firsthand experience with hate incidents, and debated whether certain scenarios had all the legal requirements of a hate crime.

I just don’t like the idea of somebody feeling uncomfortable in my community.

Dean said the workshop is one of many ways he’s trying to make good on a promise to students to be more responsive to bias-motivated incidents.

“Just because something has always been the way it is doesn’t necessarily mean that’s the right way. We need to evolve,” Dean said. “I just don’t like the idea of somebody feeling uncomfortable in my community.”

The idea for the mobile trainings came a couple of years ago, when FBI data showed a sharp increase in reported hate crimes — and that’s with only spotty, voluntary reporting from law enforcement agencies around the country.

The trainers are former senior Justice Department prosecutors and agents with years of experience in bias-motivated crimes. They go from city to city teaching police about hate-crime laws in their states — not always an easy task given the debate in law enforcement circles over whether such laws are necessary or even constitutional.

Cynthia Deitle, a former FBI special agent, trains police officers from two departments in Durham, N.H., on how to identify hate crimes. Deitle is with the Matthew Shepard Foundation, an advocacy group that’s part of a traveling workshop to teach law enforcement about state and federal hate-crime laws. 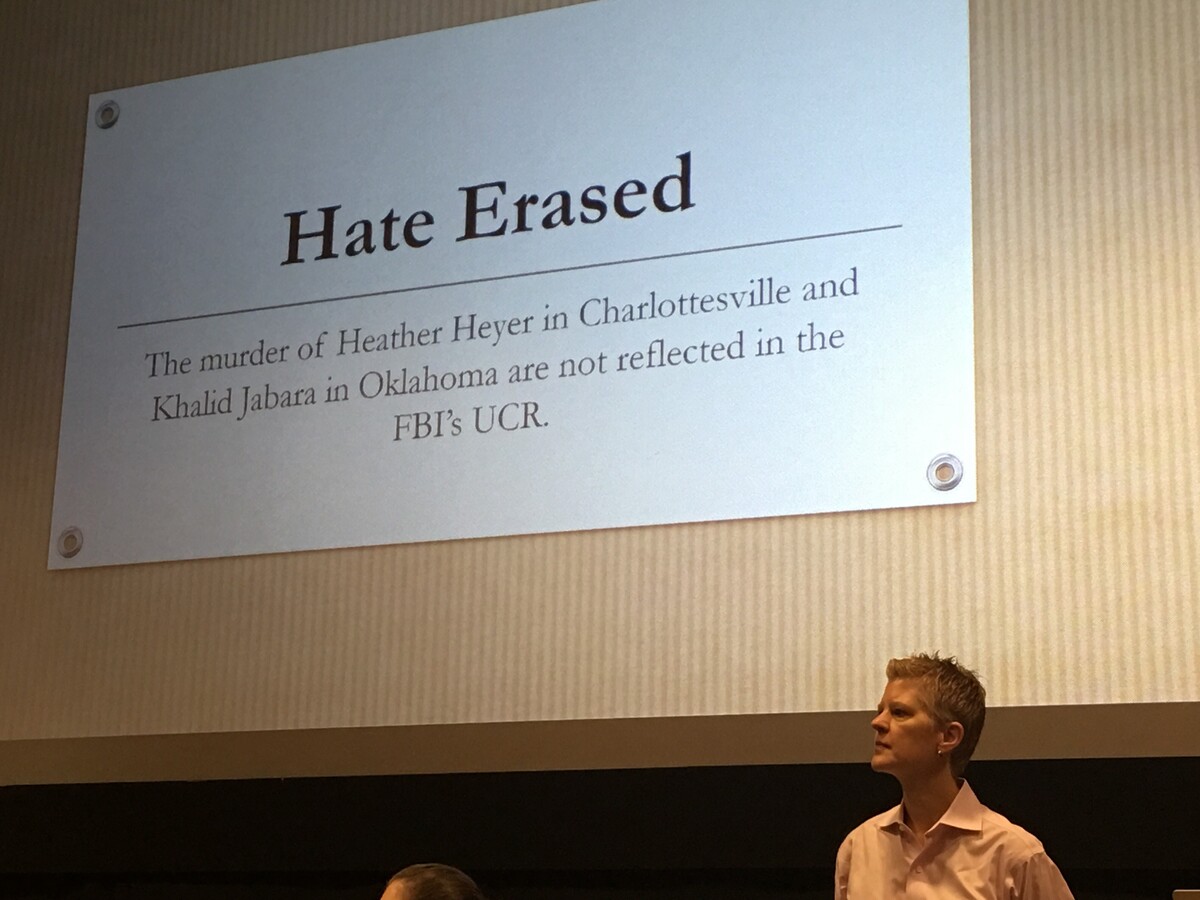 Cynthia Deitle, a former FBI special agent, trains police officers from two departments in Durham, N.H., on how to identify hate crimes. Deitle is with the Matthew Shepard Foundation, an advocacy group that’s part of a traveling workshop to teach law enforcement about state and federal hate-crime laws.

“There’s one set of the population that looks at hate crimes and sees laws that were passed to protect certain people. And why were those certain people more special than somebody else?” said trainer Cynthia Deitle, a former FBI special agent who was in charge of the bureau’s Civil Rights Unit and is now with the Matthew Shepard Foundation.

The workshop materials list some of the most common arguments of skeptical officers: Laws are already in place for crimes, so it’s a waste of time and resources to add an extra charge for bias. Hate crimes aren’t a major problem in our area. These laws are an exercise in political correctness.

The trainers don’t shy away from the tough conversation; they open with it. In New Hampshire, trainer Albert Moskowitz, a former senior Justice Department prosecutor, stood before roughly 50 officers and posed the big question about hate-crime laws.

“Do we need them?” Moscowitz asked. “What do you think?”

At first, nobody responded. Then one officer said he supports the approach New Hampshire takes now — no state hate-crime law, but prosecutors can seek tougher sentencing when bias is a motivation.

“So you’re saying that somehow these crimes are more serious than they’d otherwise be,” Moscowitz said, prodding the officer to explain his thinking.

“I didn’t say more serious,” the officer said. “An assault is an assault no matter how you look at it.”

“Because an assault against anybody is a serious crime, right?” Moscowitz said. “So why would it be more serious if the assault is substantially motivated by the person’s race or religion?”

“It should be enhanced as far as penalties,” the officer replied. “But as far as seriousness? No.”

Supporters of hate-crime laws say the idea is to acknowledge the sweeping impact of targeting someone simply for who they are. The torching of a mosque is felt by the larger Muslim community, for example, just like the murder of a trans woman sends a message to others who identify as LGBT.

“There are some people that are being singled out and in some instances hurt, and we need to do something about that. We’re sort of struggling with how to respond to that – what do we do and how do we do it?”

The trainers are careful about the framing, stressing how it’s just good police work to stay on top of hate incidents that might point to a trend or signal the formation of groups like the ones that wreaked havoc in Charlottesville, Va.

During the training, few of the New Hampshire officers volunteered their thoughts, but they opened up a little more over lunch. The chiefs asked that the officers not be identified by name because of the sensitive nature of the topic and because some work undercover.

Sitting around a table in the campus cafeteria, the officers used some of the language of hate-crime skeptics. There’s not an increase, it’s just that there’s more reporting now, they argued, or the media are quick to call something a hate crime without knowing the facts. Still, the officers said, they see the training as helpful even if they’re still conflicted about the purpose of hate-crime laws.

“If we don’t train, if we don’t stay on top of the current changes and laws and the attitudes and the climate, then we’re going to pay a big price for that,” one veteran officer said, as others nodded in agreement. “We’ll lose the trust of the community, and we can’t do that.”