Big Beef Prepares For Battle, As Interest Grows In Plant-Based And Lab-Grown Meats

The meatless Impossible Burger is pictured at Little Donkey in Cambridge, Mass. 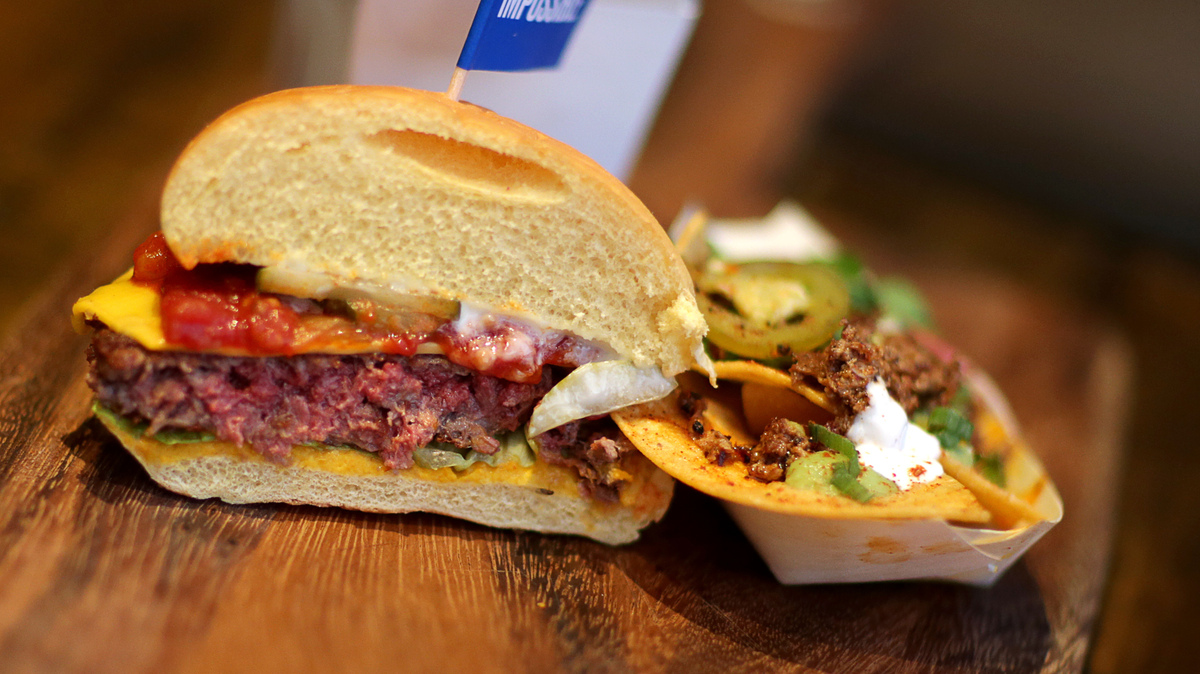 The meatless Impossible Burger is pictured at Little Donkey in Cambridge, Mass.

The U.S. meat industry is gigantic, with roughly $200 billion a year in sales, and getting larger. But the industry faces emerging threats on two fronts: plant-based meat substitutes and actual meat grown in labs.

Plant-based meat substitutes are a lot more, well, meaty than they used to be. They sear on the grill and even “bleed.” They look, taste and feel in the mouth a lot like meat. Savannah Blevin, a server at Charlie Hooper’s, an old-school bar and grill in Kansas City, Mo., says the vegetarian Impossible Burgers on the menu are popular with the meat-eating crowd.

“I had a vegetarian actually turn it away, because it reminded them so much of meat, they sent it back,” says Blevins. “It’s delicious,” she adds.

The industry that makes these products is taking off, growing 20 percent a year.

“Business is booming,” says Todd Boyman, co-founder of food company Hungry Planet. “We just can’t keep up. We’re actually having to expand our production facilities to keep up with the demand that’s out there for this type of food.”

Plant-based meat substitutes tend to be more expensive than meat, and high in saturated fat. But, obviously, animals aren’t killed to make them, and Boyman says they’re much more efficient.

“When you look at how conventional meat is produced, it’s plant protein going through a cow or chicken or pig, et cetera, and getting turned into a different form,” says Boyman. “All of us in this category, we’re doing the same thing, but without the service of animals.”

Of course, taking the animals out of the meat business is not good news for people who raise meat animals for a living. In fact, livestock producers face two big threats to market share: rapidly-improving plant-based meat substitutes, and meat grown from animal cells in laboratories.

The meat industry is focused on shaping the regulatory environment for its new competitors, taking into account lessons learned from the rise of plant-based milks.

After more than a decade of fast growth, plant-based milks have now captured about 13 percent of the liquid milk market, according to the Good Food Institute, a non-profit that promotes alternatives to animal protein.

Beck says that in the United States milk does have a legal “standard of identity,” a legally binding definition of a product, which guarantees consumers know what they are actually buying. The default is that milk comes from a cow. And Beck argues that the very word “milk” carries nutritional expectations that plant-based products don’t. She says the Food and Drug Administration, which regulates milk, is falling down on the job in allowing companies making plant-based products to represent them as “milk.”

“At the end of the day, words have meaning and product labels need to provide consumers with enough information to make informed purchasing decisions,” Beck says.

Plant-based food advocates, and probably many consumers, would say that there really is no confusion about the origin of something called almond milk, any more than there is about a product like peanut butter, or milk of magnesia. But the livestock industry is lobbying to try to stop plant-based meats from gaining market share with ambiguous labels. It promoted a new law in Missouri that forbids “misrepresenting a product” not derived from a dead animal as meat.

The law is tied up in court, but its language is interesting, because it also addresses an as yet distant but ominous threat to the livestock industry: real meat produced without slaughtering animals — meat grown entirely in laboratories.

“I grew up growing lots of meat in Alabama, but I didn’t get a chance to eat some of the best meat in the world. Through this process we’re going to be able to feed people all around the world — Wagyu hamburgers and Bluefin tuna and some of the most premium meats in the world,” promises Tetrick.

After all, if only a few cells from a living animal are required, and it doesn’t have to die, why not use cells from the very tastiest animals. Whale taco, anyone?

The technology here is promising. About two dozen companies world-wide are trying to scale-up production of cell-based meat. Famous investors like Bill Gates, and meat companies like Tyson and Cargill, are involved, but the technology isn’t there yet. It currently takes huge amounts of money and effort to bring even tiny helpings to the table. Still, Tetrick predicts cell-based meats will be undercutting traditional beef, chicken and fish with in a decade.

“Probably the biggest obstacle outside of the scientific ones is getting folks used to the idea that we don’t need to slaughter animals en masse and deal with our waste to enjoy a nice Turkey dinner for Thanksgiving,” Tetrick says.

“If these products are going to be marketed and sold and represented as meat, then the companies that make them should meet all of the other regulatory requirements that some company making ground beef out there has to meet today,” says Dopp.

And Dopp says that would be best done under the watchful eye of the U.S. Department of Agriculture, not the Food and Drug Administration. The FDA is the agency that let plant-based milk use the word “milk.”

The USDA already regulates meat production, and since it also promotes agriculture, it may be tougher on the emerging industry.

Federal regulators came up with a compromise: The FDA and USDA will oversee cell-based meat, with the USDA in charge of the production and labeling. But Congress may yet try to take FDA out of the oversight process together, and leave the USDA in charge of regulating the most fundamental change in meat production since people began raising animals for food.