The Houston Astros’ Roberto Osuna pitches against the New York Yankees in Game 3 of the American League Championship Series at Yankee Stadium on Oct. 15. 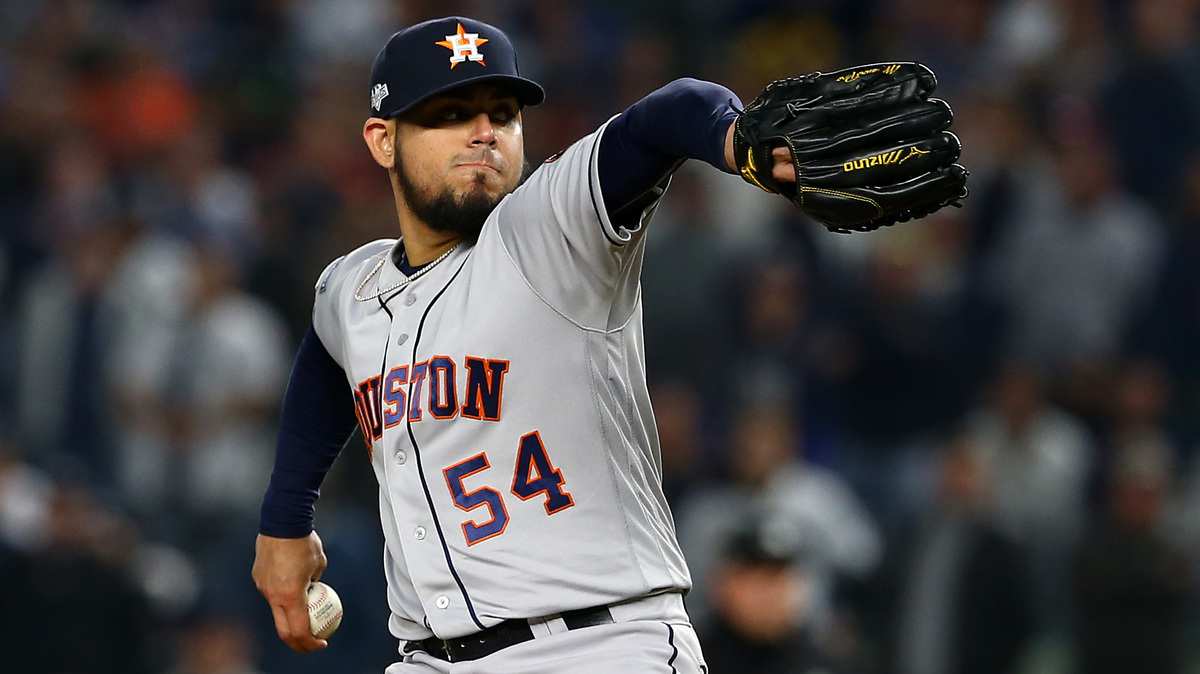 The Houston Astros’ Roberto Osuna pitches against the New York Yankees in Game 3 of the American League Championship Series at Yankee Stadium on Oct. 15.

The Houston Astros have had a season to remember: 107 regular season wins against just 55 losses. The Astros are heavy favorites to win their second World Series in three years. The series starts Tuesday evening.

Yet a celebratory rant by a senior executive after they clinched the pennant over the weekend has shifted attention to unwelcome subjects off the field, including domestic violence and the team’s handling of female reporters.

On Saturday night, not long after the victory, Astros Assistant General Manager Brandon Taubman targeted a small cluster of female reporters with a profane defense of reliever Roberto Osuna.

According to three eyewitnesses interviewed by NPR, Taubman appeared triggered by the presence of a female reporter who was wearing a purple rubber bracelet to heighten awareness about domestic violence.

That reporter has tweeted repeatedly about the issue over the years. Taubman complained last year that some of the reporters’ informational tweets — promoting domestic violence hotline telephone numbers, for example — appeared moments after Osuna entered several Astros games in relief.

That’s no coincidence: Osuna’s contract was acquired by the Astros from the Toronto Blue Jays. While with the Blue Jays, he was arrested and accused in Canada of assaulting the mother of his then 3-year-old child. Osuna did not face charges after agreeing to the equivalent of a restraining order.

The scene after the game

Teammates mobbed second baseman Jose Altuve on Saturday night after he hit a home run in the bottom of the ninth inning to clinch the pennant.

In the clubhouse, lockers and walls were sheathed in plastic sheeting, and reporters were clad in raincoats as players doused each other with Champagne.

Osuna had given up a three-run homer in the top of the ninth, but Altuve’s blast made a winner out of him.

“Altuve picked us up, picked me up, and we’re here,” Osuna told local station KHOU.

Later that evening, at the other end of the clubhouse, Taubman held court and chomped on a cigar.

“This was after most of that chaos has dissipated,” says Stephanie Apstein, a baseball writer for Sports Illustrated who had been covering the Yankees pennant drive. She ducked into the Astros’ clubhouse to get color for her story. “Most of the players were either with their families or on the field or getting dressed. So it was actually kind of unusual. You don’t see that many front-office people in those celebrations.”

In addition to the three eyewitnesses, NPR conducted four additional interviews to report this story. The Astros did not respond to NPR’s requests for comment. NPR is not currently naming the reporter or her outlet as she asked not to be drawn into the growing public controversy.

Celebrating Saturday in the clubhouse, Taubman shouted loudly and profanely at a cluster of female reporters, according to several accounts: “Thank God we got Osuna! I’m so [profanity] glad we got Osuna!”

Taubman is considered part of the front office’s nerd squad — executives who place high importance on data analysis in service of success on the baseball diamond.

The team’s number crunchers considered Osuna a steal, because he was damaged goods, or in financial terms, a distressed asset.

The Astros pledged about $300,000 toward domestic violence projects after local activists raised objections, according to press reports.

“When these teams trade for players with reprehensible pasts, they say that they understand this is the start of a conversation and that they want to,” says Sports Illustrated’s Apstein, who was one of the three female journalists subjected to Taubman’s tirade.

“They think that they can raise awareness for the topic, and they want to keep talking about this. But then when people ask them to talk about it, they act like they are the aggrieved parties in this situation.”

In a column revealing the incident, Apstein did not focus on her colleague. She wrote that Taubman’s outburst reflects a “forgive-and-forget” approach to domestic violence. The league put out a statement Tuesday saying it took domestic violence seriously and would investigate the incident. It noted the Astros were disputing her account.

In a formal statement, the Astros, defended Taubman aggressively, calling Apstein’s column “misleading and completely irresponsible” and saying the executive was just supporting a player. The team said it was “extremely disappointed in Sports Illustrated’s attempt to fabricate a story where one does not exist.”

The Astros have had a rocky relationship with the media in the recent past. The club tossed a reporter from the Detroit Free Press out of the team’s locker room after star pitcher Justin Verlander didn’t want to take his questions. The team barred another reporter from the hometown Houston Chronicle.

“It’s just arrogance. That is what the organizational philosophy with the Houston Astros is,” ESPN baseball columnist Jeff Passan said on Outside the Lines. “The Astros always, when they are attacked, will attack back. And that’s what this was, despite the fact that we’re on Day One of the World Series…talking about this, and not Gerrit Cole versus Max Scherzer.”

Subsequently on Tuesday, the team issued a more contrite statement pointing to its involvement in domestic violence initiatives. And on Tuesday afternoon, Taubman released his own apology, saying he was overexuberent – and misunderstood.

“My over-exuberance in support of a player has been misrepresented as a demonstration of a regressive attitude about an important social issue,” he wrote, in the statement. “Those that know me know that I am a progressive member of the community, and a loving and committed husband and father. I hope that those who do know me understand that the Sports Illustrated article does not reflect who I am or my values. I am sorry if anyone was offended by my actions.”