As Scrutiny Of China Grows, Some U.S. Schools Drop A Language Program

In this 2011 photo, Hu Jintao, then China’s president, visits the Confucius Institute at the Walter Payton College Preparatory High School in Chicago. China established more than 100 Confucius Institutes, which provide language and culture programs, at U.S. schools. But at least 13 universities have dropped the program due to a law that raises concerns about Chinese spying. 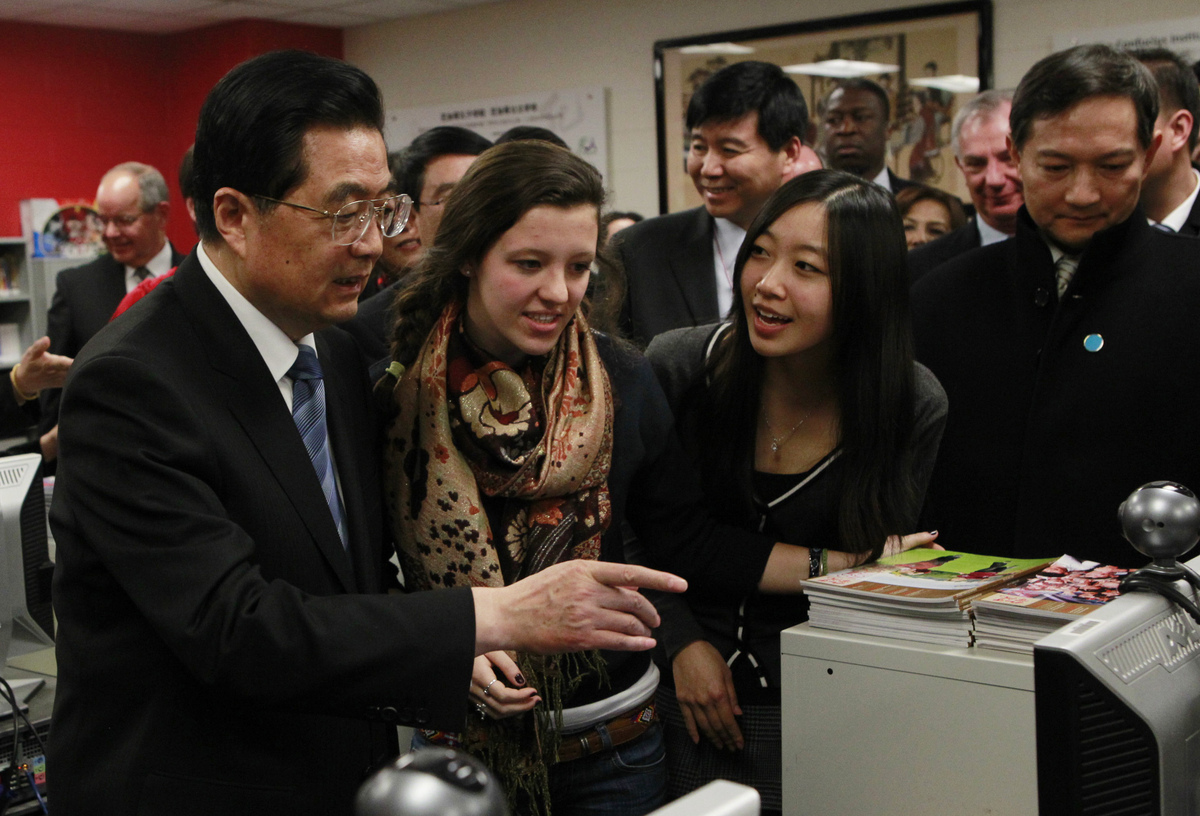 In this 2011 photo, Hu Jintao, then China’s president, visits the Confucius Institute at the Walter Payton College Preparatory High School in Chicago. China established more than 100 Confucius Institutes, which provide language and culture programs, at U.S. schools. But at least 13 universities have dropped the program due to a law that raises concerns about Chinese spying.

The Defense Department wants more Americans to speak Chinese, and it provides millions of dollars to train students at U.S. universities.

China’s government, through language centers known as Confucius Institutes, has been doing the same thing, for the same reasons, and at some of the same U.S. universities.

But a new law has forced these American universities to choose: They can take money from the Pentagon or from the Confucius Institute — but not both.

“Confucius Institutes expose U.S. universities to espionage, to the threat of theft of intellectual property, which we are seeing far too frequently at colleges and universities,” Sen. Ted Cruz, a Texas Republican, said in an interview with NPR.

Cruz attached an amendment last year to the U.S. military spending bill that says a university with a Confucius Institute cannot also receive money from the Defense Department program that pays for Chinese language training.

American politicians, China analysts and the national security establishment are in broad agreement that China is waging a massive spying campaign against the U.S. The targets include classified government and military secrets, high-tech companies and university research.

Some of these critics say the Confucius Institutes give the Chinese government an outpost on campuses that could be used to recruit spies in the U.S., and to keep close tabs on Chinese students studying here.

Still, it’s important to note that Confucius Institutes have not been charged with any wrongdoing, and overall, they remain popular at universities that have them.

He’s quick to stress that these programs “do not teach politics. They are apolitical.”

The institutes are seen as a way for China to develop its “soft power” abroad. China’s Education Ministry funds the Confucius Institutes, which are also linked to the Communist Party and its efforts to monitor Chinese students abroad and shape international perceptions of China.

Critics say that the institutes seek to stifle discussion on sensitive topics like democracy, human rights, Tibet and Taiwan.

At the Washington, D.C., center, several dozen visitors gathered on a recent summer evening for a lecture by a retired U.S. professor on the Chinese city of Harbin prior to World War II. The center has offices on Massachusetts Avenue in Northwest Washington, a neighborhood packed with some of the country’s most prominent think tanks.

At the same time, just a few blocks away, the Confucius Institute at George Washington University was holding a free Chinese language class that was open to the public.

In this 2011 photo, China’s then-Deputy Consul General Kun Lu (left) and then-University of Missouri Chancellor Brady Deaton (right) prepare to announce the opening of a Confucius Institute at the school in Columbia, Mo. The university still has its institute, which is funded by China’s Education Ministry. 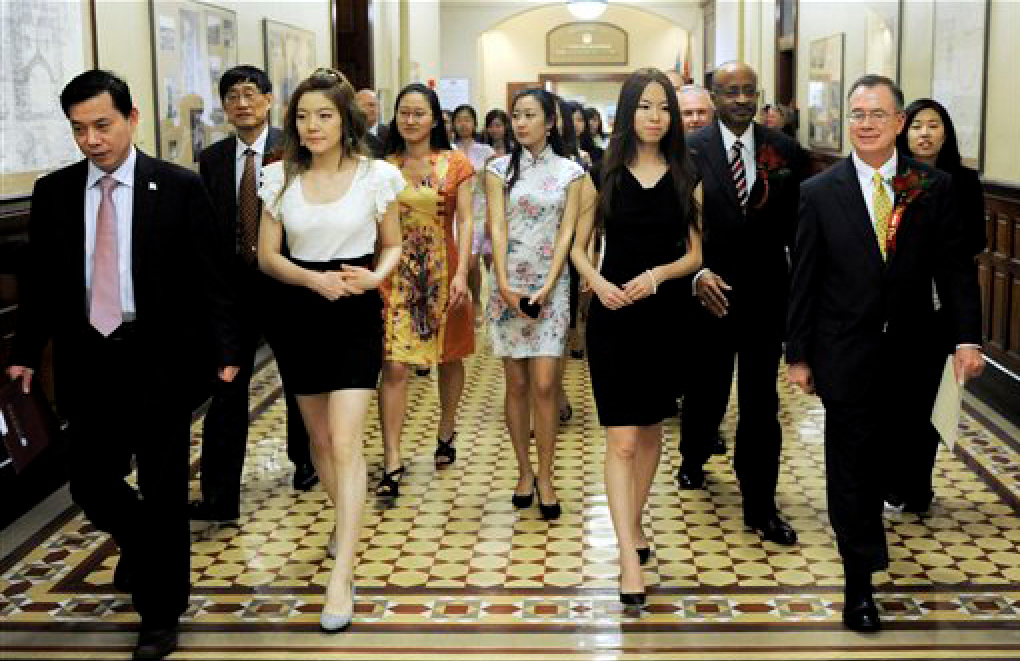 In this 2011 photo, China’s then-Deputy Consul General Kun Lu (left) and then-University of Missouri Chancellor Brady Deaton (right) prepare to announce the opening of a Confucius Institute at the school in Columbia, Mo. The university still has its institute, which is funded by China’s Education Ministry.

Riding a wave of rising American interest in China, the first Confucius Institute in the U.S. opened at the University of Maryland in 2004. The institutes quickly expanded, growing to more than 100 in the U.S. and more than 500 worldwide.

But, forced to choose, at least 13 U.S. universities have closed Confucius Institutes in the past year, in order to preserve Defense Department funding. They include the University of Oregon.

“It’s very clear that faculty were anguished about the choice,” said Dennis Galvan, the university’s vice provost for global engagement. “They would have much preferred to not have to choose between these two projects that they had created and nourished for more than a decade. So it was a reluctant decision.”

The Defense Department program, known as the Language Flagship, sends close to $1 million annually to the University of Oregon for Chinese language studies, and about a third of that is then passed on to Portland public schools for their own Chinese language instruction, Galvan said.

Students in the program do not face any obligations afterwards, such as serving in the military. The Pentagon says the goal is to generate more Chinese speakers, to better understand a country that is a top national security priority.

The Confucius Institute was providing around $100,000 annually to the university, Galvan said. Since Oregon already has a strong Chinese language program, the Chinese money went mostly for conferences, workshops and guest speakers on topics often related to China’s global rise, he said.

The University of Nebraska is keeping its Confucius Institute, which Harvey Perlman helped bring to the school in 2007 when he was the chancellor. As part of the arrangement, the institute sends about a dozen Chinese language teachers to high schools around the state.

“In Scotts Bluff, Neb., a town of about 15,000, we had a Chinese teacher out there that taught two years of Chinese and five students graduated from high school and chose to start their undergraduate degree at Xi’an Jiaotong,” a partner university in China, he said.

Perlman, now a law professor, travels annually to China with law school students from Nebraska to study the Chinese legal system. The Confucius Institute pays for the trip.

Perlman and Galvan both stressed that their universities maintained full control of their curricula and did not see evidence that the Confucius Institutes were interfering with academic programs.

A magnet for Chinese students

Over the past several decades, Chinese students have surged into the United States, with more than 350,000 now studying at American colleges and universities, more than from any other country. By comparison, U.S. students in China number a little over 10,000, according to the Institute for International Education.

Amid the growing concerns about Chinese espionage and the theft of research, the FBI and U.S. intelligence agencies are encouraging American universities to develop protocols for monitoring students and academics from China.

At the Confucius Center in Washington, Gao, the executive director, steers clear of politics. But he acknowledges the darkening mood.

“It is a very challenging time for anybody doing bilateral work,” he said.

Meanwhile, Cruz has additional plans. Asked if he would like to shut down all the Confucius Institutes, he told NPR: “To be honest, yes. I do not think it is good for U.S. universities to become beachheads for the Chinese government.”

With an eye on China, Cruz proposed a bill last month that would give the FBI greater authority to guard against the theft of university research.