The parts of the scroll were scanned using shortwave-infrared hyperspectral imaging. 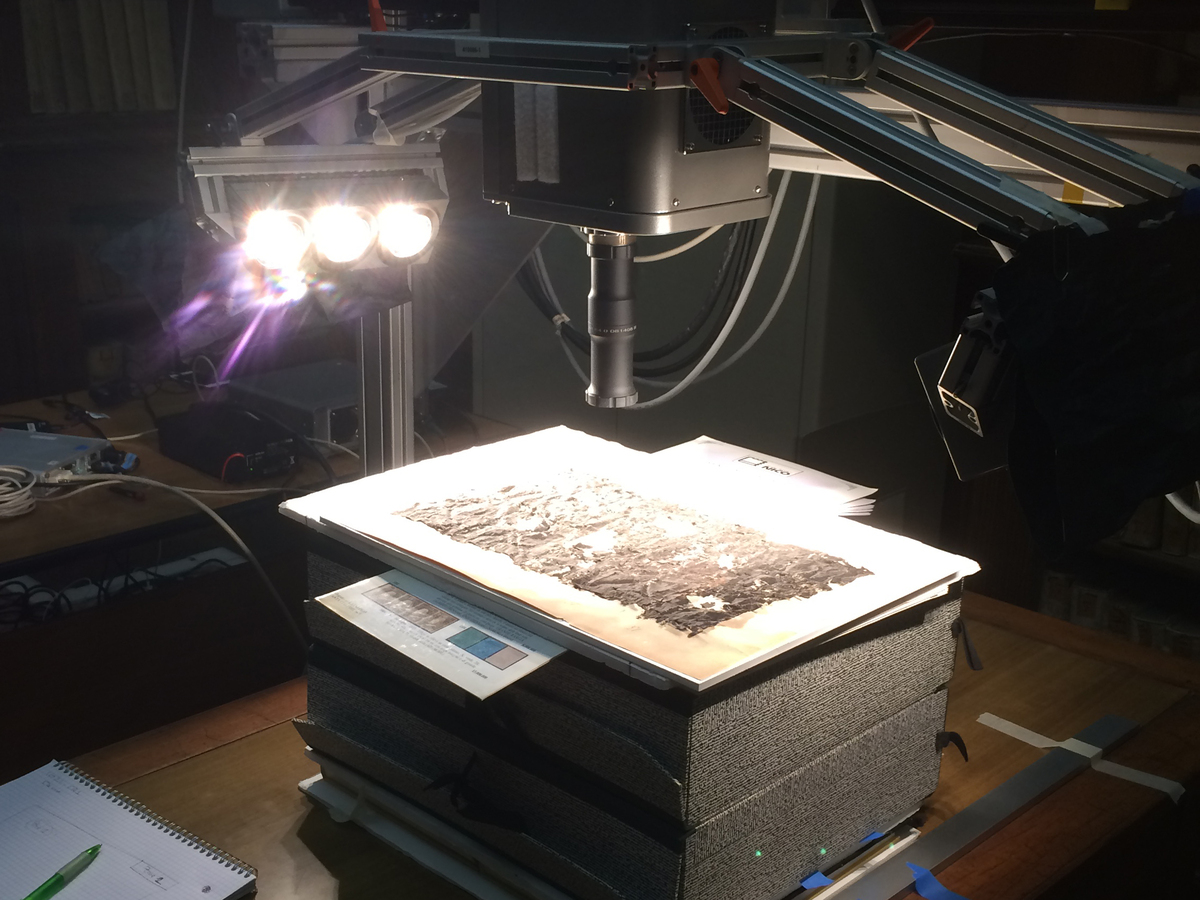 The parts of the scroll were scanned using shortwave-infrared hyperspectral imaging.

More than 200 years ago, scholars glued the remains of an ancient papyrus scroll onto cardboard to preserve it. But the scroll, a history of Plato’s Academy, also had writing on the back. Now scholars have deployed imaging technology to read what’s been concealed.

This scroll came from a library in Herculaneum, near Mount Vesuvius. And it was caught in the famous eruption of that volcano nearly 2,000 years ago — the same eruption that buried the city of Pompeii.

The scroll doesn’t look like much now. It’s blackened and in tatters. In fact, it looks like what you’d find at the bottom of your barbecue.

But the same processes that charred the scroll and the rest of that library also preserved it, according to papyrus scholar Graziano Ranocchia from the Italian National Research Council.

“Unless Vesuvius erupted, they would never have survived,” he says.

The scroll was damaged in the eruption of Mount Vesuvius, but that caused chemical reactions that also helped to preserve it.

The scroll was discovered and painstakingly unrolled in 1795. It’s unusual among Herculaneum scrolls because it has writing in Greek on the front and back. To preserve the fragments, scholars glued them to cardboard. But since then, only one side has been visible.

“And it has been impossible to detach them from it since then,” Ranocchia said. “You see, this would destroy them. They are extremely frayed.”

The scroll is a rough draft of a history of the academy founded by the philosopher Plato — written by another philosopher, Philodemus, who lived during the first century B.C. The research team used a technique called shortwave-infrared hyperspectral imaging to finally see some of what’s concealed on the back. The paper was published in Science Advances on Friday.

Ranocchia said the huge spectrum range allowed them to penetrate the layers of the papyrus. “So with a huge penetration capacity, this is why we are able to read what our predecessors weren’t able to read through conventional multispectral imaging or infrared photography.”

What they found are bits of text that Philodemus wanted to insert into his book, such as quotes from other sources he was considering using in the history. Classicist Kilian Fleischer from the University of Würzburg, who is putting together a new edition of Philodemus’ history using these images, says it provides a unique view of an ancient philosopher’s writing process.

“We have here more or less the only case where we can really see how an ancient author worked and composed his book,” Fleischer says. “We can see he made notes — insert this later, insert this and this, and skip this and this for the final version and so on.”

He says their research also had an interesting byproduct — it made it much easier to read the front of the scroll by enhancing the contrast. “It was a bit like Columbus, went out to find India but at the very end he ended up in America. We wanted to make the back visible but the front of the papyrus is displayed much better.”

They’ve been able to read more than 150 new words from the front of the papyrus. And in a book made up of fragments, Fleischer says that every letter counts. He compares it to doing a crossword.

“Sometimes you need just one letter in order to reconstruct a whole word, or in our case, a whole period, a whole clause, a whole sentence,” Fleischer adds.

They were also able to identify places where the text was misread before. For example, scholars had previously read the Greek word for “charmed.” But the new imaging showed it actually said “enslaved.”

Fleischer also says that the text calls into doubt certain historical details about Plato — for example, it suggests that he was enslaved at an earlier date than previously believed.

“This is actually rather exciting,” he says, “if you read or know something which hasn’t been read for almost 2,000 years.

Other researchers are trying to figure out other methods to read other scrolls damaged in the Vesuvius eruption. Brent Seales, who leads the Digital Restoration Initiative at the University of Kentucky, has been working on two scrolls that are still rolled up — and he says the data recently collected are spectacular.

“We now have our best shot ever at reading the ink inside the rolled-up scrolls,” Seales says. They’re using an X-ray technique to create a three-dimensional reconstruction of the text.

Seales adds they’re still working to analyze what the scrolls say. One of the most exciting things is that it is unclear what they contain — they’re “black boxes” that “represent true time capsules.”