Members of the New York Philharmonic, led by music director Alan Gilbert, during the opening of a new season on September 21, 2016 in New York. 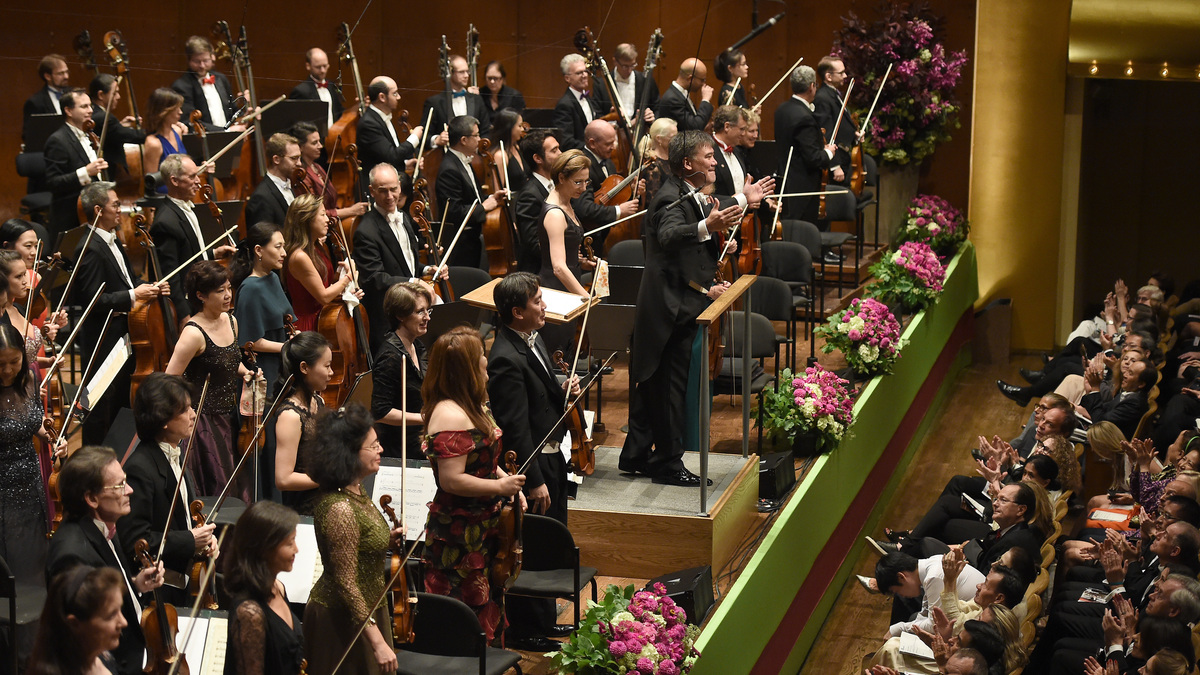 Members of the New York Philharmonic, led by music director Alan Gilbert, during the opening of a new season on September 21, 2016 in New York.

Trustees of the American Federation of Musicians and Employers’ Pension Fund (AFM-EPF) announced the evening of May 24 that they will apply to the U.S. Treasury for a reduction in member benefits, due to the AFM-EPF’s “critical and declining” status – meaning the fund is projected to run out of money in 20 years. The AFM represents 80,000 professionals in the United States and Canada who play in symphony orchestras and opera houses, on Broadway, in film and television, and on studio recordings. Approximately 50,000 AFM members participate in the pension fund, and it’s estimated that 20,000 of them will eventually see a reduction in their pension benefits.

“The pension is a symptom of a much bigger problem with the AFM and what was going on at Local 802,” says Adam Krauthamer, the newly elected president of the New York local and the executive director of Musicians for Pension Security, a group which is educating musicians and trying to find solutions to this issue. “The musicians’ national union has seen large drops in membership, less and less work under contract. And, seemingly, for musicians my age,” says the 38-year-old, “there was no real serious effort to address changing the future.”

As of March 2019, the fund had assets of $1.8 billion, versus liabilities of $3 billion, putting the AFM-EPF at a critical 60% funding threshold. Because of that change in status, the funds’ trustees have applied to the U.S. Treasury using the Multiemployer Pension Reform Act (MPRA) in order to reduce members’ benefits and try to prevent insolvency.

“Although reducing earned benefits will be painful,” a statement on the fund’s website reads, “the Trustees have decided to apply to do so because it is better than the alternative, which is running out of money and leaving everyone with almost no benefits.” The changes will not happen immediately – regular benefits will be paid during the MPRA application process, and the changes aren’t expected to go into effect until late 2020 or early 2021. The AFM-EPF is also campaigning for congressional legislation to protect 120 similarly situated multiemployer pension funds from insolvency. “The stakes are too high to avoid taking action, while we wait for Congress to act,” the fund’s statement reads.

“This is going to have devastating effects on our community,” says Cenovia Cummins, a violinist who’s been freelancing on Broadway and in orchestras around New York since the mid-1980s. “To work as hard as you do and then be told you don’t have a retirement… You don’t want to get older with so much uncertainty in your life. People in my age bracket are going to see the deepest cuts. All the money we’ve put into this pension and it not being there… It’s such a betrayal.”

The greying of the union has had a major impact on the pension fund. According to the fund’s FAQ page, it’s “a mature plan, with the retiree population having grown faster than the active population, which means that benefit payments are growing faster than contributions. While the union has bargained additional contributions into the Fund, it is not enough to avoid running out of money.” In the fiscal year that ended March 31, 2018, the fund paid out $171 million in benefits, but only received $68 million in pension contributions. In a statement to NPR, the pension fund writes, “This negative cash flow is projected to continue — and worsen. Every year, if investment returns are not able to make up this shortfall, the Fund has to draw down assets, which leaves less of an asset base on which to generate investment returns the following year.”

Another part of the problem is lingering fallout from the 2008 economic downturn, when the fund lost 40% of its value in just 18 months — according to Adam Krauthamer, somewhere in the vicinity of $800 million. Still, while most pension funds have turned themselves around in the years since, the AFM-EPF has been a laggard, he claims. “From 2008 to 2018, that 10-year period, according to our own trustees’ documents and consultants, we ranked dead last. We were in the 99 percentile out of 100. I think our investment return net of just investment fees was 3.2%. And we have incredibly high administrative fees.” The Fund disputes that figure, quoting an average annualized return of 9.4% (based on a lower amount of assets post-downturn). Regardless, a class-action lawsuit filed in 2017 alleges that fund managers took a series of risky investments to counter the losses after the downturn, which trustees claim has “no merit.”

The Musicians for Pension Security website offers a comparison between the AFM-EPF and the AFTRA pension fund, which are similar in size: Between 2009 and 2014, the musicians’ fund paid $50 million more in expenses and fees than the AFTRA fund. Chase says, per the fund, this comparison is inaccurate: “The AFM-EPF has more than twice as many employers, several times more collective bargaining agreements and several thousand more participants.”

In fact, the pension crisis is one reason that Krauthamer, a French horn player with multiple Broadway credits, was elected following an insurgent campaign in 2018. Local 802 represents musicians at the New York Philharmonic, Metropolitan Opera and on Broadway, among other places, and its members voted by a two-to-one margin to have Krauthamer replace the incumbent, Tino Gagliardi. (Gagliardi still remains a trustee of the pension fund.)

Not all pension participants are expected to receive reduced benefits. Because of MPRA protections, participants who are 80 and older, as well as those receiving disability pensions, will not see any reductions. Between 75 and 79, there will be a sliding scale, to determine partial reductions. Those protections also apply to survivor benefits. But for 40% of AFM’s members — its younger population — the reductions determined by the MPRA process will become permanent.

As president of Local 802, the largest local in the union, Krauthamer is trying to effect change on a national level, with some proposals for the upcoming AFM convention, led by national president Ray Hair, in June. “We have a proposal to bring two experts onto the board of trustees; one in actuarial science, one in finance,” he says, “I think that that could significantly help us. We’ve proposed that the fund start holding regular meetings. We propose them trying to increase employer contributions, which we’re trying to do ourselves here in New York. We’ll see what happens.”

The bottom line, Krauthamer says, is “it affects all musicians. Some more than others, but it is something that if we don’t address, you know, my generation is not going to have the same future as the generations ahead of us. And frankly, the generations ahead of us are really looking at serious cuts to benefits at the end of their careers. And to say it’s unfair is an understatement. I mean, this wasn’t a gift. This was money that was earned, that was taken out of their wages. And now we’re simply at a point where we’re calling for accountability, transparency and change around the fund.”