Who Is Justin Amash And Why Is He Willing To Go Against His Own Party?

Rep. Justin Amash, R-Mich., walks up the House steps of the Capitol for the final votes before the Memorial Day recess on Thursday, May 23, 2019. 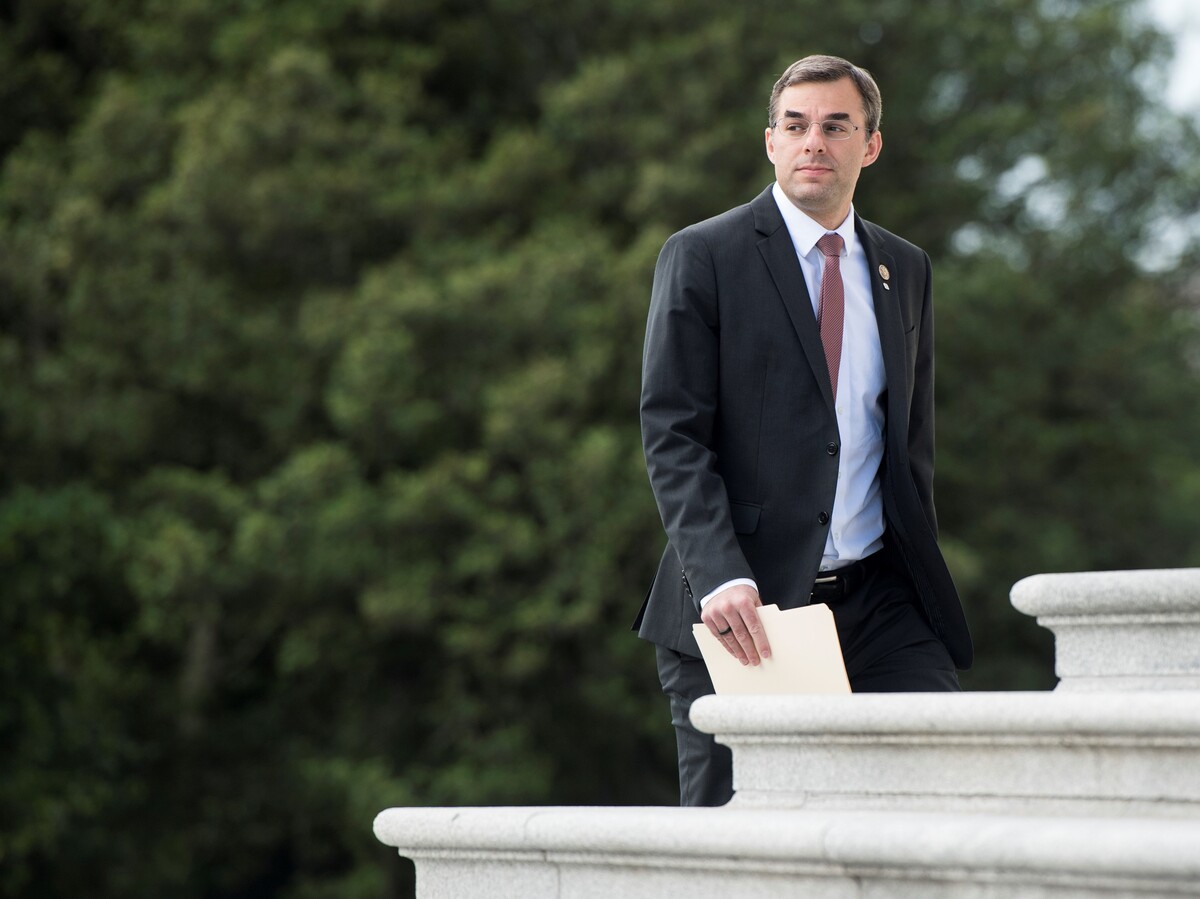 Rep. Justin Amash, R-Mich., walks up the House steps of the Capitol for the final votes before the Memorial Day recess on Thursday, May 23, 2019.

The congressman from West Michigan is the only Republican in Congress to have called for impeachment proceedings against President Trump.

On Wednesday, he was the only Republican to vote to hold Attorney General William Barr and Commerce Secretary Wilbur Ross in contempt of Congress.

And he’s facing taunts and insults from other Republicans.

In the politics of Washington, D.C., standing alone is rarely a good thing, maybe that’s why so few politicians do it.

But back home in Michigan, many people who know Amash say they’re not surprised at all by his willingness to go against his own party — even if that decision costs him his seat in Congress.

Bush says Amash is diligent and intentional. Someone who doesn’t bend his principles.

Other longtime friends echo similar sentiments. In high school, Amash became known for always finishing his homework, even if it meant his friends had to wait to hang out. Amash eventually went on to become valedictorian.

Amash’s parents are both immigrants. His mother is originally from Syria. His father, Atallah, came to the United States in 1956 as a Christian refugee from Palestine.

“Justin just always had a keen sense of what was at stake in terms of what governments do or don’t do, how much they interfere, how much they limit themselves,” says Jessica Bratt Carle, who got to know Amash in high school.

By the time Bratt Carle and Bush got to know the Amash family, they had built a successful family business, which they still own.

“I think a lot of that work ethic,” Bush says, “largely comes from his father.”

When Justin Amash got elected to Congress, Bush served in his district office. He says he saw the same person there that he did in kindergarten.

“Justin is the least surprising representative in Congress once you have an understanding of how he views his role,” Bush says.

That role, according to Bush, is to uphold the Constitution and protect individual liberty.

Amash is known as one of the more Libertarian members of Congress. Some have speculated Amash could even dump the Republican Party to run as the presidential candidate for the Libertarians. Amash has not ruled out that move.

But for now, he remains in the Republican Party, despite his many disagreements with party leadership.

When the 448-page report by former special counsel Robert Mueller was released to the public in April, Amash initially gave no comment. He posted on Twitter that he would read the report “carefully and completely” before saying anything.

And for nearly a month, Amash said nothing.

Then, in a string of tweets posted on May 18, Amash gave his conclusions from the report.

Here are my principal conclusions:
1. Attorney General Barr has deliberately misrepresented Mueller’s report.
2. President Trump has engaged in impeachable conduct.
3. Partisanship has eroded our system of checks and balances.
4. Few members of Congress have read the report.

He said the report showed President Trump engaged in impeachable conduct and that Attorney General William Barr intentionally misled people about what’s in the report.

In response, the president tweeted that Amash is a “loser” and a lightweight.”

Not long after that, Amash held a town hall event in Grand Rapids, in an auditorium at his old high school, Grand Rapids Christian High School.

“I think it’s really important that we do our job as a Congress, that we not allow misconduct to go undeterred,” Amash said, to applause. “That we not just say someone can violate the public trust and that there are no consequences to it.”

Amash answered questions for two hours that night. He got multiple standing ovations.

But not from everyone.

“I think a lot of the people here that are cheering you and applauding your courage most likely a lot of them didn’t vote for you, said Anna Timmer. “I, on the other hand, have voted for you in every election since 2010. And, in fact, I worked on your first campaign in 2010. I knocked on hundreds of doors for you.”

It’s not just the impeachment talk. Timmer says she supports Trump. Amash never has. Timmer says it doesn’t matter to her if Amash says he’s standing on principle.

“You know, he’s not sitting on the Supreme Court,” Timmer says. “His job is not to kind of drone on and on about tiny little, debatable portions of the Constitution that not everyone agrees with him on. His job is to represent us.”

And that is where Amash may face his biggest challenge in the next election. Not just over his stance on impeachment, but over whether he can get anything done as a representative, when his whole party is against him.

The chamber backed a primary challenger against Amash in 2014. While Amash won that race, Johnston says he may not this time.

“Some would say he’s vulnerable at this point,” Johnston says. “He got elected during a Tea Party swell. That tea party is now, you know, the party of Trump in many ways.”

Two Republican challengers have already announced that they’ll run against Amash in the next primary.

On Thursday, Donald Trump Jr. tweeted results of a recent poll showing one of those challengers, state Rep. Jim Lower, leading Amash in the district.

Amash’s account retweeted it with the comment: “if it’s what you say I love it especially later in the summer,” a reference to an email Donald Trump Jr. sent when someone reached out to him in the summer of 2016 offering dirt on Hillary Clinton as “part of Russia and its government’s support of Mr. Trump.”

The email and the meeting that came out of it were described in the report by Mueller and his team. Trump Jr. says nothing came of the meeting, and the president has defended his son’s actions.

Amash has said he’s not afraid of losing his seat in the next election. He notes he performed better in the district in 2016 than Trump.

But Amash has lost many of his former political allies since that election.

This week, CNN reported Amash has stepped down from the House Freedom Caucus, a group he helped found.

The conservative Club for Growth, which supported him in previous elections, distanced itself from his comments on Trump’s conduct.

Amash has also lost the support of the powerful, and wealthy Devos family. Many of the family members, have homes in Amash’s district. Amash has connections to the family going all the way back to his high school days.

No other prominent Republicans have yet publicly come to Amash’s defense. So for now, Amash remains alone in his own party.