President Donald Trump speaks before signing a trade agreement with Japan in the Roosevelt Room of the White House on Monday. A temporary stay of decision earlier in the day means he can hold on to his tax records for the time being. 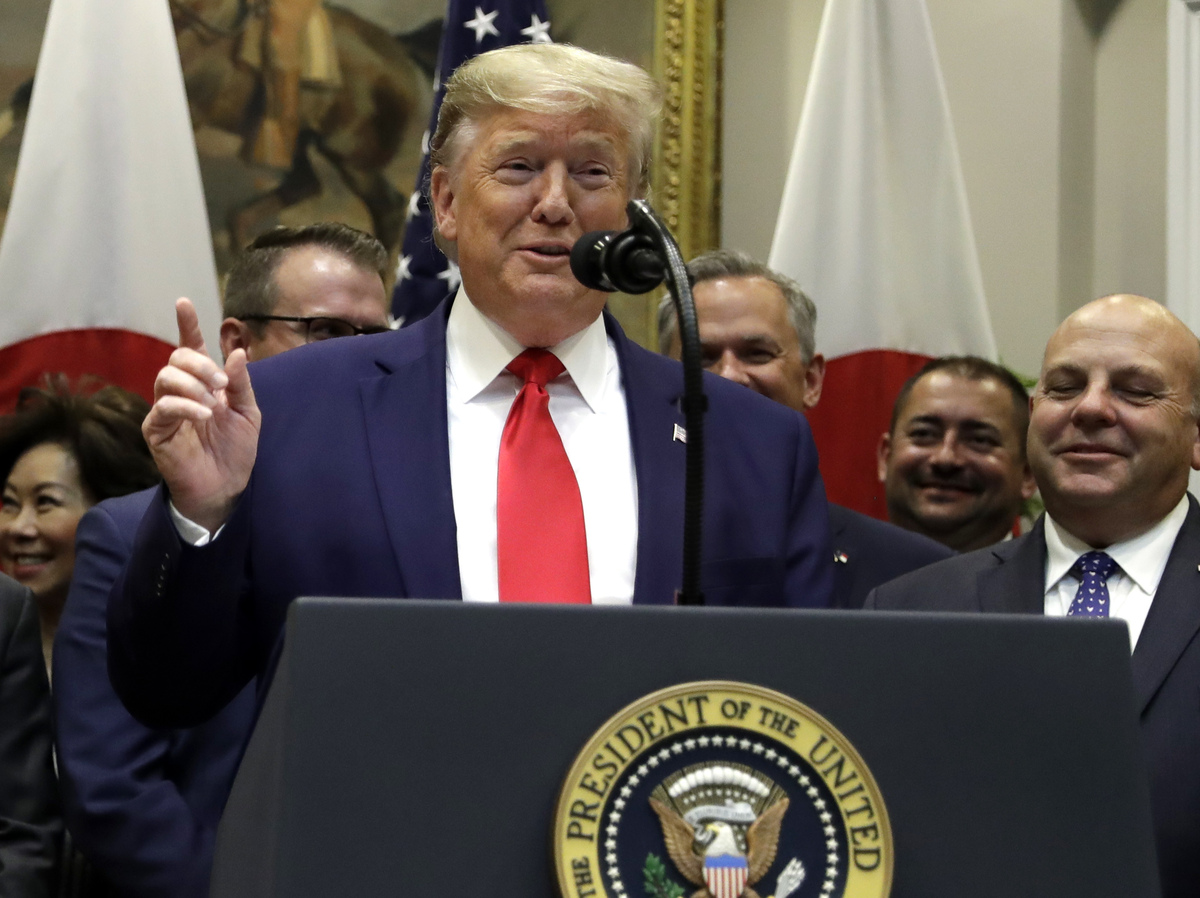 President Donald Trump speaks before signing a trade agreement with Japan in the Roosevelt Room of the White House on Monday. A temporary stay of decision earlier in the day means he can hold on to his tax records for the time being.

President Trump has won at least a temporary reprieve from a judge’s order to release his tax records as part of a criminal investigation into his business dealings. Those records could be released to investigators as litigation continues.

Tax experts say they could reveal a lot – or not much at all – about Trump’s financial history.

The returns could prompt further investigation by prosecutors in New York, who are digging into Trump’s business dealings around hush money his organization allegedly paid to two women who say they had extramarital affairs with him. And whatever they contain, they’re a matter of ongoing public interest, given that Trump has bucked precedent by not releasing them. Here are a few things that tax experts say they’ll be watching for as litigation over Trump’s tax records continues:

How good is Trump, really, at business?

Trump’s wealth and success as a businessman are a central part of his brand. A New York Times investigation last year revealed that much of his wealth in his early years in business came from his father, Fred Trump. And his tax records could give some additional clues to his more recent business dealings.

But his reported income may be limited by the fact that wealthy people are good at finding ways to avoid taxes, said Jeff Hoopes, associate professor of business at the University of North Carolina’s Kenan-Flagler Business School.

“The whole point of tax planning is – you try to look like you’re really bad at business on your tax return. [That] is the goal of, kind of, both legal tax planning and illegal tax evasion.” Hoopes said. “…If your goal is pay as little in taxes as possible, what you try to do is show the IRS that you made as little income as possible.”

How does he make his money – and how much?

Trump has a lot of business dealings, and that likely means a lot of documents, Hoopes said.

“You and I file a tax return and it might be a dozen, two dozen, three dozen pages.” He said. “There are over 500 entities in the Donald Trump Organization. So this is gonna be a big, messy thing if it ever comes out – just what is a Donald Trump tax return, is kind of an open question?”

The details of Trump’s income may be obscured by complex legal relationships between Trump’s companies and his business partnerships, said Annette Nellen, a professor of accounting and an expert in tax law at San Jose State University.

“You can’t always get a lot of detail. You’re getting more, what’s their type of income, what are the types of expenses that they had,” Nellen said. “…Did they have losses? What are these losses from?”

It also may be difficult to tell whether a business loss is the result of poor management, or a typical cost of doing business, such as real estate depreciation or maintenance expenses, she said.

But there could be clues about Trump’s overall financial situation, Nellen said. She tells her students to look at presidential candidates’ tax records and notice how both their income and their marginal rate of taxation compare to those of average Americans.

“Compared to the rest of the population are they at the top?” Nellen said. “…I think it’s helping you know where they fit among all taxpayers.”

Has Trump done anything illegal?

Maybe, but the tax records alone probably won’t show that, according to Jeff Hoopes at UNC.

“If your goal with Donald Trump’s tax return is to find something he did wrong with his taxes, it’s not gonna be easy – at all,” Hoopes said.

Hoopes said it’s likely that, as President Trump has claimed, he’s already been audited repeatedly by the Internal Revenue Service – a process that involves producing many more records than a typical tax return would include.

Trump’s tax records could point to some of the organizations and individuals he’s done business with, “but you’re not going to find the name of every vendor or contractor that he’s written a check for,” said Deidre Liedel, an accounting professor at the University of Toledo.

She said the tax returns could point to potential legal problems, but they contain limited amounts of documentation.

“To think that they’re going to find a trail of information that supports an illegal activity simply by looking at the tax returns, I think, is an erroneous assumption,” Liedel said. “Realistically they are looking for the ability to go deeper into his documentation.”

Prosecutors likely will be looking at information related to any dealings with foreign entities.

How much money does he give away?

“We live in a time when we are very intrigued by wealthy individuals,” she said. “…I think a lot of time when people tout their wealth, one of the things that you may be interested in is, ‘How much are you giving?'”

Kay Maresh, an accounting professor at the University of Nebraska-Lincoln, notes that Trump also has history of touting his generosity – though he has not always produced evidence of it.

“Because he talks a lot about being charitable – kind of looking at those, seeing if there were any made to his Trump Foundation,” Maresh said.

What precedent does this set?

Deidre Liedel said she’s also watching to see what kind of precedent the case might set about how much financial information elected officials can be forced to release.

“I think there absolutely is a question here of a political motive,” Liedel said. “And what does it mean for other people who may or may not want to get into politics.”

Jonathan Adler, a constitutional law expert at Case Western Reserve University, said the case ultimately is about presidential power and the rule of law.

“The underlying question is whether the president is like the rest of us – an individual who is subject to the laws of this nation, or whether the president has some sort of quasi-royal prerogative,” Adler said. “…As a legal question, that really strikes at the heart of how we conceive of the office of the President of the United States.”

Richmond Pope said she’d like to know what’s in those returns – and why Trump is fighting so hard to withhold them.

“I’m just curious, why the hesitation? Because I think that the hesitation has created, probably, more news stories than their needs to be. Because if they were just public, no one would probably think anything about it,” she said. “It makes us curious because they’re not, but I don’t know if we’ll ever know truly what the full story is.”