WATCH: Bridge Collapses In Taiwan And Oil Tanker Crashes To The Ground

Rescuers work near the site of a collapsed bridge in northeastern Taiwan. On Tuesday, the towering Nanfangao Bridge collapsed, sending an oil tanker falling onto boats in the water below. 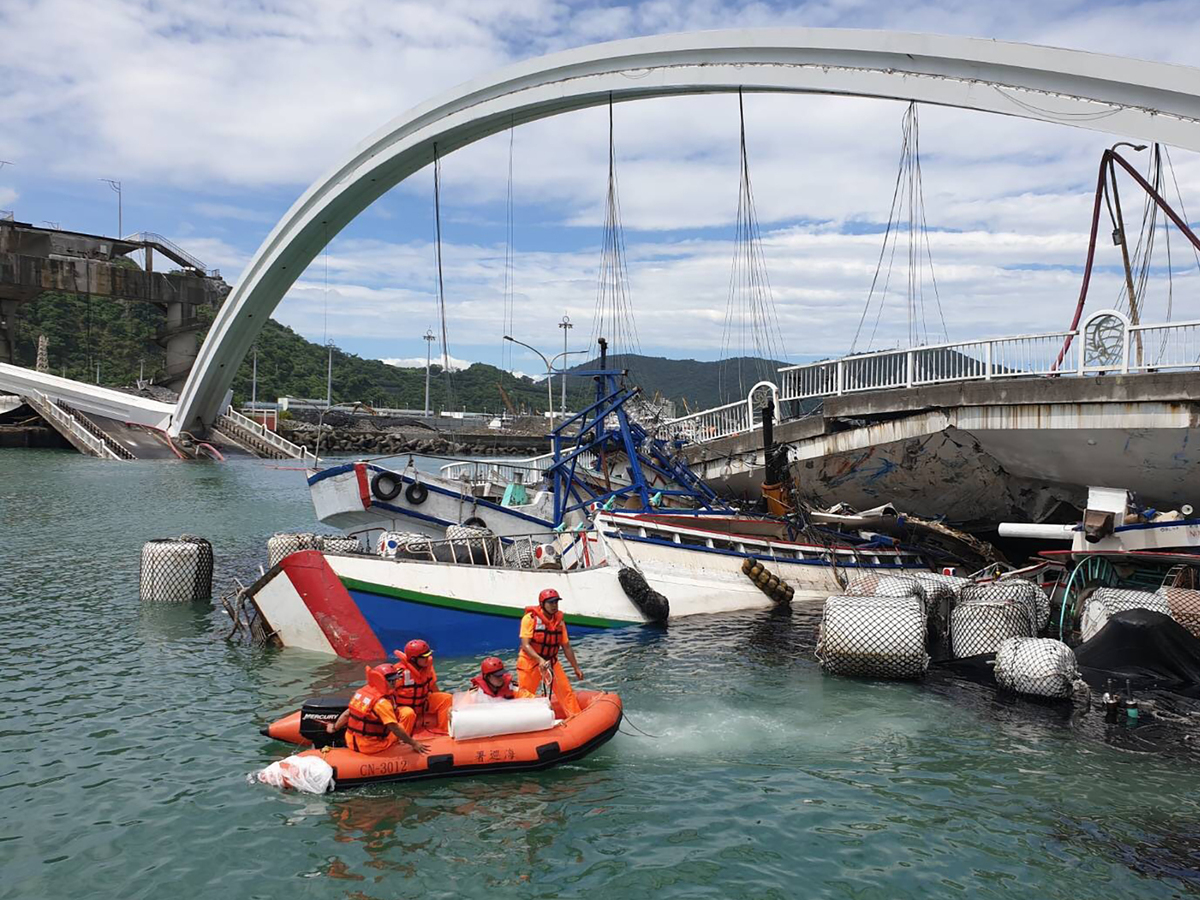 Rescuers work near the site of a collapsed bridge in northeastern Taiwan. On Tuesday, the towering Nanfangao Bridge collapsed, sending an oil tanker falling onto boats in the water below.

Dramatic video shot in Taiwan captures the moment an arch bridge collapsed on Tuesday, causing a section of the bridge and a passing oil tanker crashing down onto several fishing boats.

More than a dozen people were injured or missing after the Nanfangao Bridge in Su’ao township, in the island’s northeast, collapsed around 9:30 a.m. local time, according to the English-language Taiwan News.

“A tank truck was on the bridge when it collapsed, and it ignited after falling into the waterway, spewing smoke into the air,” the news agency reported.

Citing the National Fire Agency, Taiwan News said that 10 people were hospitalized and that six fishermen are thought to still be trapped in their boats underneath the bridge rubble.

Video shows the moment the Nanfangao Bridge collapsed on Tuesday.

Video shows the truck driving across the nearly 500-foot-long bridge. The conditions appear to be postcard-worthy — sunlight, mountains in the background and calm turquoise waters below.

The truck nearly reaches the end of the bridge when, seemingly out of nowhere, the structure gives way. The bridge bows in the middle before collapsing into the water.

It’s unclear what caused the arch bridge to fail. Taiwan News said officials are focusing the early stages of their investigation on the bridge’s steel cables. But the Central News Agency said a bridge pier may have collapsed, according to The Associated Press.

The AP also notes that while the weather at the time was fine, “the collapse occurred hours after a typhoon swept by the island. Disaster relief officials would not say if the storm had weakened the bridge or give other details on the cause.”

Su’ao township chief Lee Ming-ch told reporters on Tuesday that five injured people were taken to hospitals and that at least six crew members were still trapped under the bridge.

The landmark bridge was completed in 1999, according to the website Focus Taiwan, which adds that it was “the only single steel arch bridge in Taiwan and was the first bifurcated single arch bridge in Asia.”