Venezuelan boats are moored at a port in Willemstad, Curaçao, in February. For many Venezuelans, Caribbean islands like Curaçao are escapes from their country’s turmoil. 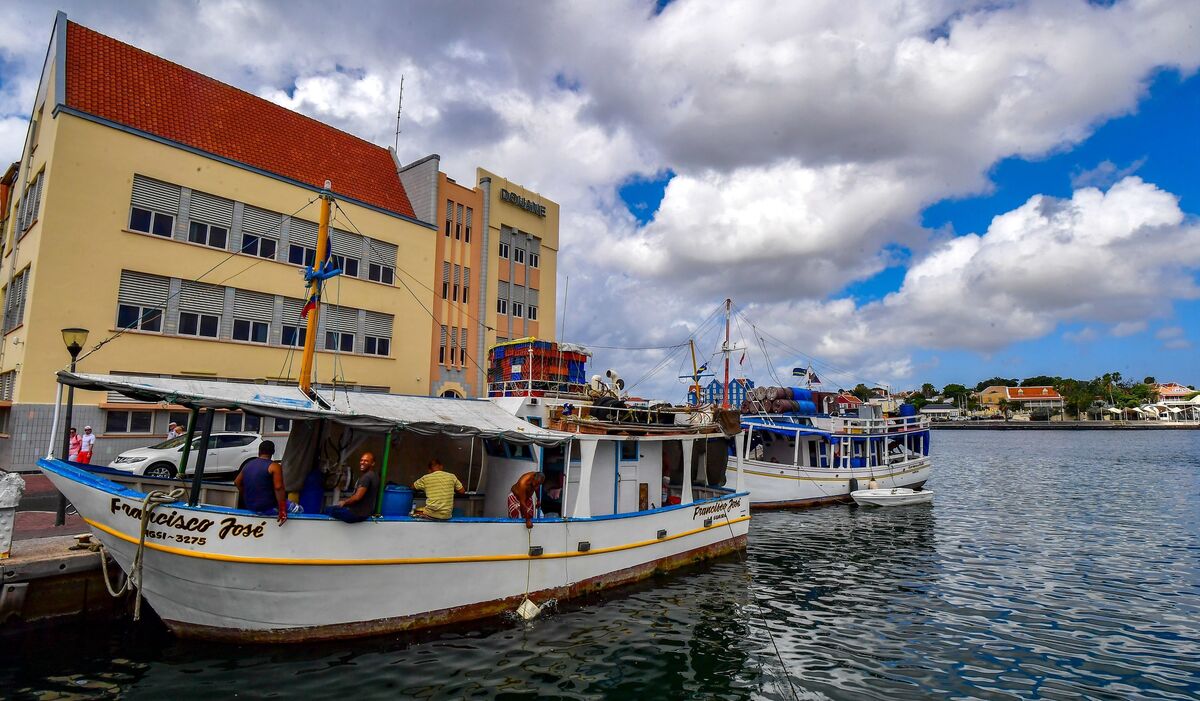 Venezuelan boats are moored at a port in Willemstad, Curaçao, in February. For many Venezuelans, Caribbean islands like Curaçao are escapes from their country’s turmoil.

Auri Chirinos keeps close watch over her 2-year-old twin daughters as she walks with them through La Vela de Coro, a fishing town on Venezuela’s Caribbean coast. She’s extremely protective of the toddlers — and for good reason.

She recently lost her eldest daughter, who drowned while trying to reach the island of Curaçao.

In January 2018, Jeanauri Jiménez Chirinos, 18, squeezed aboard a small boat captained by smugglers and packed with migrants bound for Curaçao, a Dutch island located 40 miles off the Venezuelan coast. They were part of an exodus of 4 million Venezuelans — about 12% of Venezuela’s population — who have emigrated, largely within the past four years, amid the country’s worst economic crisis in history.

Venezuelan Auri Chirinos holds photos of her daughter, Jeanauri Jiménez Chirinos, who died trying to get to Curaçao. 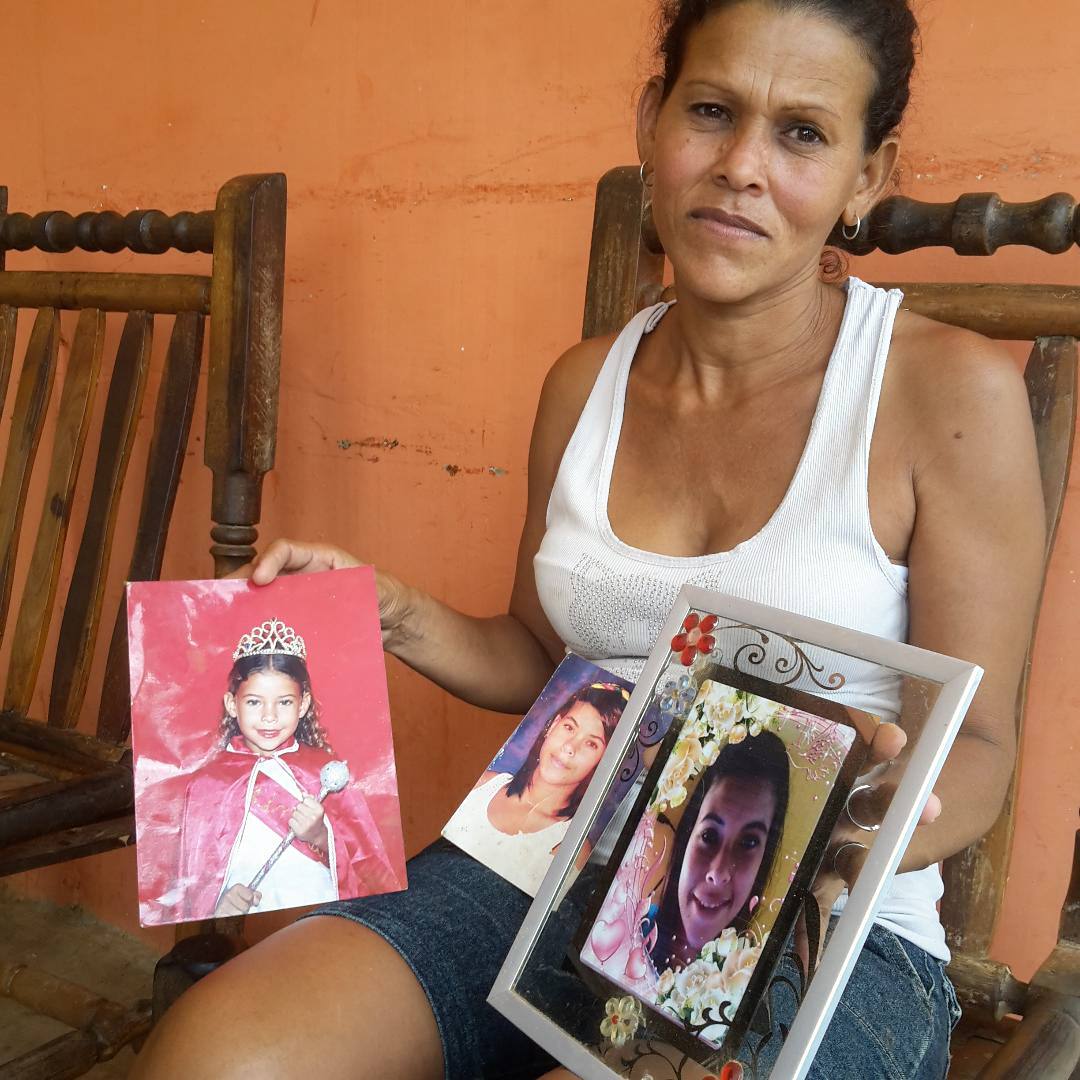 Venezuelan Auri Chirinos holds photos of her daughter, Jeanauri Jiménez Chirinos, who died trying to get to Curaçao.

Jiménez hoped to work as a housekeeper in Curaçao, where she could earn more in one day than she could in one month in Venezuela. She planned to send money back to her mother, who was struggling to provide food and clothes for the twins.

But shortly before reaching the Caribbean island, the boat hit rocks and broke apart. About half of the 30 passengers on board, including Jiménez, drowned, were crushed to death on the rocks or disappeared at sea.

“It’s so horrible. Every day that goes by, I miss her even more,” says a sobbing Chirinos as she clutches photos of a smiling Jiménez.

Most Venezuelans looking to emigrate cross land borders into Colombia or Brazil. But for many Venezuelans in coastal towns, Curaçao, Aruba and the twin-island nation of Trinidad and Tobago are much closer. And due to a long history of trade and travel, many mainlanders have friends and relatives on the islands who can provide housing and job connections.

Refugees International, a nonprofit advocacy organization, reports that as many as 13,000 Venezuelans may now be living in Curaçao, which is home to just 162,000 people. More than 60,000 Venezuelans now live in Trinidad and Tobago, whose population is 1.3 million.

But migrating to the islands is getting harder. Authorities are scrutinizing Venezuelans who enter legally and expelling those who overstay their travel permits, according to Refugees International. All this has fueled illegal migration.

Clandestine boats that attempt the crossing sometimes encounter storms and massive waves or run out of gas. To avoid getting caught by authorities on shore, smugglers often force their passengers to swim the final few hundred yards to the beach.

In just the past two months, two boats carrying about 60 Venezuelans to Curaçao disappeared.

Another boat, packed with 34 Venezuelans, apparently sank last month on its way to Trinidad. None of its passengers have been found, though a man suspected of being the boat’s captain was plucked from the sea by a fisherman and taken to Grenada, where he went into hiding.

A priest prays with supporters of Venezuela’s opposition, who hold Venezuelan flags and signs calling for humanitarian aid, at the port in Willemstad, Curaçao, on Feb. 23. 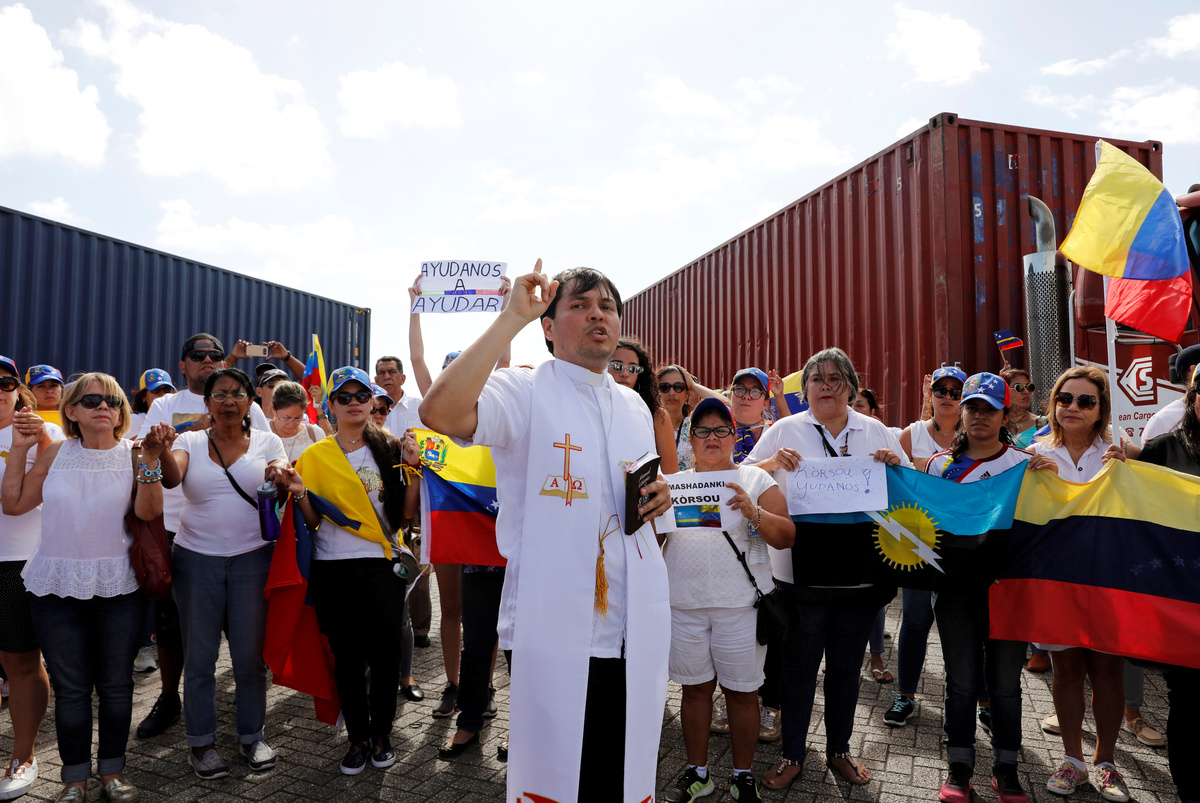 A priest prays with supporters of Venezuela’s opposition, who hold Venezuelan flags and signs calling for humanitarian aid, at the port in Willemstad, Curaçao, on Feb. 23.

“These trips are organized by smugglers who offer their services to migrants who are desperate to get to the other shore,” Venezuelan opposition legislator Luis Stefanelli said in a recent interview with VPItv, a Venezuelan online television channel.

He said that more than 100 Venezuelans per week leave the northwest Venezuelan coast bound for Curaçao, each paying about $400 for passage.

Driving migration to the islands is the collapsing economy along the coast.

Venezuela’s port town of La Vela de Coro, for example, has long depended on fruit sales to Curaçao, a tiny island that lacks both farmland and water. Hundreds of vendors from the town used to travel to the island on cargo boats to sell mangoes, papayas and watermelons.

But in February, Venezuela cut diplomatic ties with Curaçao over its support for Venezuela’s opposition, which is trying to depose authoritarian President Nicolás Maduro. Now the maritime border with Curaçao is closed.

“This has hit us really hard,” says fruit salesman Douglas Amayo, who used to make the trip to Curaçao twice a month. He now sells fish at the town’s outdoor market but earns bolívares, the Venezuelan currency that has been rendered almost worthless by hyperinflation.

La Vela de Coro is not yet a ghost town. But there are signs that many residents are joining Venezuela’s great migration.

Not far from the market, the town’s youth orchestra tunes up for a practice session. But many of the chairs are empty. The orchestra used to have 40 musicians but is down to 22 because so many families have left the country.

“This has been a huge loss,” says José Rafael Chirinos, the orchestra’s director (no relation to Auri Chirinos).

Curaçao remains a popular destination even though people keep dying in trying to get there. Despite the risks, Gleyber Marín, an unemployed 20-year-old from La Vela de Coro, is saving money for the journey. Several of his friends have already made the crossing.

“They told me it was terrible. They could not believe how dangerous it was. You either make it or you die,” he said. “But if I get the chance, I will go.”

Many victims from last year’s tragedy, including Jeanauri Jiménez Chirinos, hailed from La Vela de Coro, a sleepy town of parks, beaches and colonial buildings where most people know one another. For a while, the whole town was in mourning, says Tiffany Tovar, a friend of Jiménez’s.

“It was a very somber atmosphere due to the loss of all these young people” she said.

For Auri Chirinos, the death of her daughter continues to haunt her. Another loss came a few months ago when her husband left for Ecuador seeking work. But at least she still has the twins.

“When I lost one of my daughters,” she says, “that’s when I understood why God gave me two more.”