Tsampa: The Tibetan Cereal That Helped Spark An Uprising

A bowl of tsampa flour pictured with other dishes in a typical Tibetan lunch. Counterclockwise from left: potatoes in turmeric and cumin; liangfen; mung bean jelly and spring onions with cilantro, triple-fried in red chili pepper; and black tea. To make pa, the tsampa would be mixed with butter, tea, salt and sometimes Tibetan cheese. 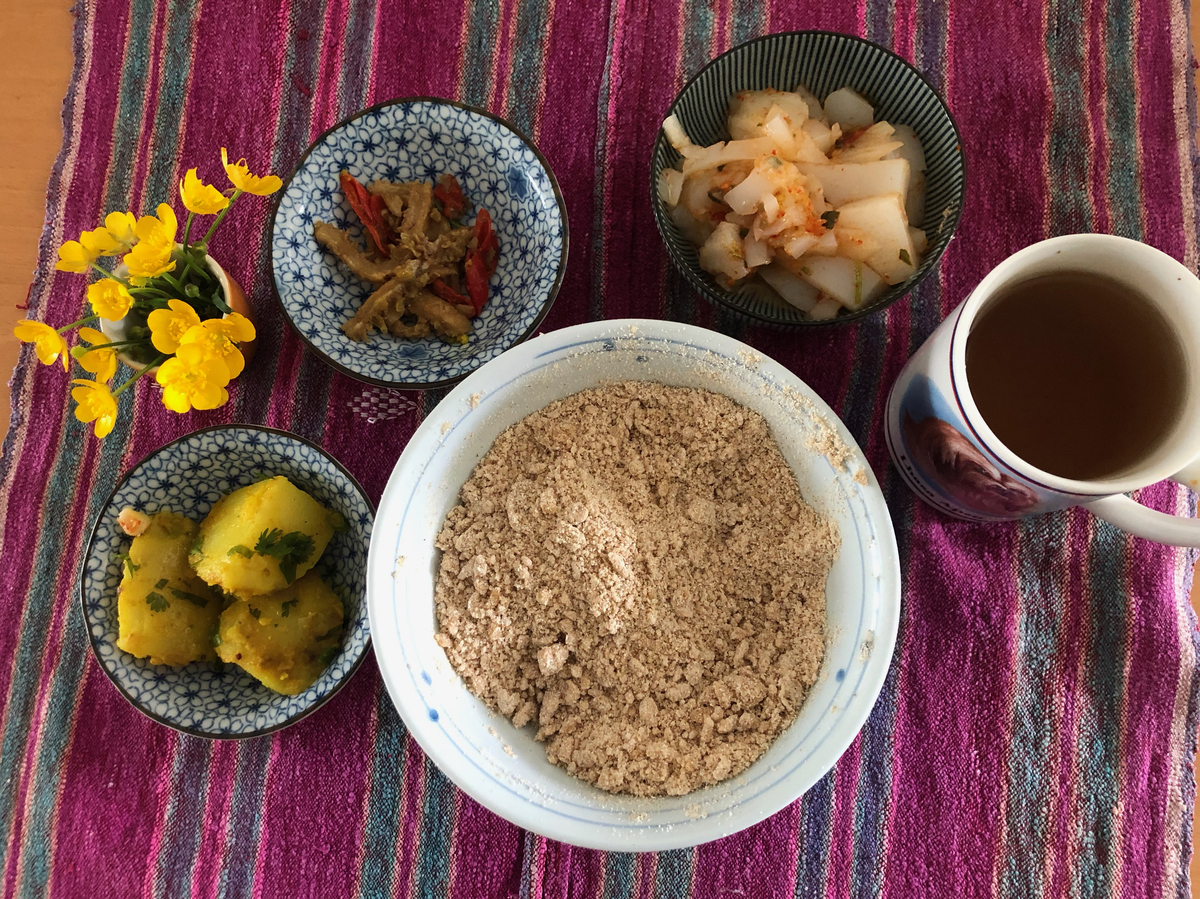 A bowl of tsampa flour pictured with other dishes in a typical Tibetan lunch. Counterclockwise from left: potatoes in turmeric and cumin; liangfen; mung bean jelly and spring onions with cilantro, triple-fried in red chili pepper; and black tea. To make pa, the tsampa would be mixed with butter, tea, salt and sometimes Tibetan cheese.

On rare occasions as a kid, Renzin Yuthok and his family got to share a special breakfast. They’d gather around a table in their home in Bellevue, Wash., his dad would roll tsampa flour, butter and tea into balls called pa, and then he’d hand them out to his kids.

The meal served a symbolic purpose for Yuthok: “From a very young age, [Tibetans] are taught that … reclaiming our homeland … is what our highest aspiration could be,” he says. Yuthok’s family fled Tibet in the 1950s, but their breakfast — and its grounding ingredient, tsampa — kept him connected to that dream.

The word tsampa in Tibetan usually refers to ground-up, roasted barley flour, although occasionally the flour comes from wheat or another grain. It can be made into cereal, mashed into a poultice or mixed with yak butter and tea to make calorie-dense energy balls for long mountain treks (or breakfast treats for schoolkids). It’s tossed into the air at religious ceremonies and can be incorporated into wedding cakes. The Dalai Lama says he eats it for breakfast.

Thanks to its hardiness (it’s one of the few cereal crops that can survive on the high, arid and harsh Tibetan Plateau), barley has sustained the Tibetan population for thousands of years. Scientists say the cultivation of barley may have enabled ancient Tibetans to expand their civilization into the Himalayas. Researchers have found barley traces in 2,100-year-old remains of tea, which means it’s possible that tsampa was eaten during that time.

But over the last century, tsampa has become even more than a culturally significant staple food. It’s become a centerpiece of Tibetan identity and a tool of protest.

Between 1950 and 1951, China annexed the region of Tibet. Most Tibetans called the event an invasion, while the Chinese, in documents solidifying the annexation, called it a peaceful liberation (though it involved a bloody battle in the region of Chamdo).

Though Tibet’s rulers rejected Chinese claims to their territory, Tibetans had few sources of political unity back then. “Tibetans are diverse in language, custom, habits — there’s a lot of diversity within the single Tibetan group,” says Tsering Shakya, a Tibetan historian and associate professor at the University of British Columbia. So when the Chinese army entered the region in 1950, Tibetans initially lacked a unifying force.

Tsampa — which is eaten across Tibet — soon became that force. “When [Tibetan resistance leaders] were looking to unite [Tibetans] into a single identity, they adopted tsampa as a symbol,” Shakya says. In 1952, two years after the Chinese occupation began, The Tibet Mirror, an independent Tibetan language newspaper, published a letter calling for revolt. Its first call-out? Tsampa eaters:

Years later, in 1956, the Mirror again called out to “tsampa-eaters” to “unite your minds” and “stand up!” The Mirror’s exhortations were one of a series of events that led to what’s known today as the 1959 Tibetan Uprising, when thousands of Tibetan protesters gathered in the streets of the capital city, Lhasa, calling for Tibet’s independence from China and later, mobilizing to fight the regime. The Dalai Lama fled the region during this time.

This growing unity, coupled with support from anti-Communist countries like the U.S., was not enough for the relatively small Tibetan population to defeat the powerful Chinese army. They lost their fight for independence and are governed as part of China to this day. Thousands of Tibetans were killed during the 1959 uprising, and the Tibetan government-in-exile has estimated that the occupation led to the loss of 1.2 million lives.

Since the 1950s, China’s incorporation of Tibet has fragmented tsampa’s place as the region’s staple grain, Yuthok says, partly because of an influx of Han Chinese who tend to prefer crops like wheat and rice.

Still, people in Tibet eat far more barley per person than nearly anywhere in the world. And tsampa’s importance to Tibetan identity and struggle has not diminished. If anything, it has been making a comeback.

Starting in 2008, a new wave of revolts began. In 2009, protesting monks cried, “Rise up, all tsampa-eating Tibetans!” In 2012, protesters ate tsampa and threw it up into the air during a mass prayer; at a different rally, according to a witness, monks were “chanting mantras and eating tsampa in protest.”

So important was tsampa to these protests that the modern-day Tibetan resistance movement often goes by another name online: The Tsampa Revolution, or #TsampaRevolution.

Tsampa has also found its way into Tibetan political music and youth culture. In 2012 the rapper Shapaley, who spent his childhood in Tibet, released a song called “Tsampa” on YouTube. The accompanying music video features the rapper sitting behind a bowl of tsampa, a traditional bag for storing the grain and a steaming cup of butter tea.

“Our parents gave us tsampa so we’ll give it to our kids / the Tibetan spirit will always remain,” Shapaley raps. “You can threaten us but we keep doing our thing … you can’t stop us!” At the end of the video he throws what looks like a cloud of tsampa into the air, in homage to the traditional sang-sol ceremony — or perhaps to the monks protesting in Tibet that same year, thousands of miles away.

Yuthok, who was born in Taiwan and moved to the U.S. as a kid in the 1970s, is now working with his aunts Namlha and Tzesom as they try to spark another movement with tsampa in North America. Their company, Peak Sherpa, sells tsampa as a hot cereal and as “energy bites” — sort of a cross between an energy bar and the traditional pa. The cereal, I can attest, is delicious — the grains are smaller and denser than oatmeal, making for a pleasing nutty taste without the gluey texture of oats.

Because the barley used in tsampa doesn’t have to be heavily processed, it retains more nutrients, and the flour’s healthfulness rivals that of other ancient grains. Tsampa is high in fiber and essential minerals and it’s prebiotic, meaning it helps promote the growth of healthy gut bacteria. It has a low glycemic index, which helps keep blood sugar from spiking. Plus, from a marketing perspective, it could be seen as one more in a line of Tibetan foods that have caught on with the health-food crowd — like goji berries and butter tea (reinvented as bulletproof coffee here in the U.S.).

So why has the Yuthoks’ company had a tough time breaking into the U.S. market? While they’re still relatively new, “it’s been really hard,” he admits. “I’d say we’re definitely a niche product at this point.” Though, he notes, “we definitely have our fans.”

Here’s what he suspects: Hot breakfast cereals are a highly competitive sector. Oats are nutritionally comparable to barley. And at only a few cents per serving, oats are much cheaper — and they’re nostalgia-inducing.

“People have a relationship with the Quaker guy, you know?” he says. “They love that guy, and what’s not to love?”

Additionally, American barley is not exactly easy to eat. Most barley grown here comes in a tough, inedible hull that’s difficult to remove, making it hard for food producers to create “whole grain” foods out of the original plant, unlike rice or wheat. Much of our barley is used to brew beer and other alcoholic beverages.

But that could very well shift soon. Tibetan barley lacks a tough outer hull, meaning it’s easy to thresh, like wheat — and that’s likely because of selective breeding by Tibetans over thousands of years, says Patrick Hayes, a professor of barley breeding and genetics at Oregon State University. Hayes is working on popularizing these Tibetan barley strains in the U.S. He plans to use them to develop locally adapted varieties.

So far, so good. But Hayes is careful to acknowledge the true source of his current success. “We wouldn’t have been able to do this work without what [Tibetans] did over thousands of years.” If he ends up converting us all to barley, we will have tsampa eaters to thank.