President Trump speaks to supporters during a rally at the Van Andel Arena Thursday in Grand Rapids, Mich. 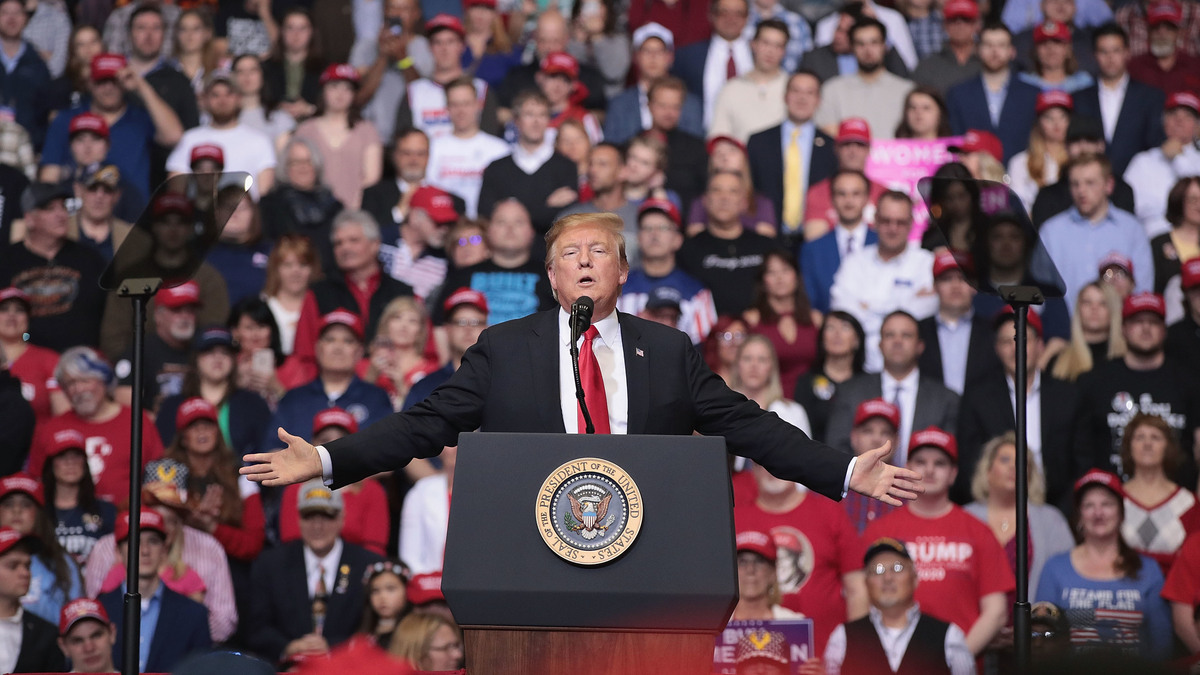 President Trump speaks to supporters during a rally at the Van Andel Arena Thursday in Grand Rapids, Mich.

Editor’s note: NPR has decided in this case to spell out a vulgar word that the president used because it meets our standard for use of offensive language: It is “absolutely integral to the meaning and spirit of the story being told.”

At his Thursday night rally in Grand Rapids, Mich., President Trump and his supporters were in a celebratory mood.

“After three years of lies and smears and slander, the Russia hoax is finally dead,” Trump said, to loud cheers. “The collusion delusion is over.”

The rally was the president’s first since the end of special counsel Robert Mueller’s investigation into Russian interference in the 2016 presidential election.

In touting Mueller’s findings, Trump also continued spreading an untruth he has been repeating since the investigation ended.

“The special counsel completed its report and found no collusion and no obstruction,” he said.

The president also took aim at congressional Democrats who have called for Mueller’s report to be released publicly and who have said they will continue investigating the president.

“These are sick people. And there has to be accountability, because it is all lies, and they know it is lies,” Trump said, specifically calling out House Judiciary Chairman Jerrold Nadler, D-N.Y., and House intelligence committee Chairman Adam Schiff, D-Calif., (whom Trump called “little pencil-neck Adam Schiff”).

“Democrats will now have to decide whether they will continue defrauding the public with ridiculous bullshit, partisan investigations,” Trump also told the Michigan crowd, “Or whether they will apologize to the American people.”

While the Mueller report was the news Trump emphasized first, the president’s speech sprawled into many other areas, including this week’s renewed push by his administration on health care.

“We’re going to get rid of Obamacare, and I said it the other day: The Republican Party will become the party of great health care,” he said.

“We will always protect patients with pre-existing conditions,” he later added. “Always, always.”

That shift to health care caught some congressional Republicans by surprise. In the 2018 midterm elections, Republicans lost dozens of House seats after playing defense on health care. In particular, Democrats attacked Republicans on their Obamacare repeal effort that experts said would have made it more difficult for many with pre-existing conditions to get coverage.

There was another bit of new material in Trump’s speech, when he pledged to get “full funding of $300 million for the Great Lakes Restoration Initiative.” That initiative protects the Great Lakes environment by promoting clean water and fighting invasive species, among other things.

This statement came weeks after the administration’s budget proposed cutting the $300 million initiative’s funding down to $30 million, according to the Detroit Free Press. But, it is actually Congress that determines spending for the federal government so the actual level of funding for the initiative won’t be determined until Congress takes its action on appropriations in response to Trump’s budget proposal.

Trump also spent time looking ahead to the 2020 election, casting Democrats as “radical” and “socialist” and railing against the Green New Deal, a sweeping Democratic plan that would combat climate change and overhaul the economy.

“I love campaigning against the Green New Deal,” he said. “I want them to make that a big part of their platform.”

All this came in a speech that was full of Trump’s usual rally staples. He bragged about winning the 2016 election after many commentators predicted he’d lose. He touted the nation’s continuing job growth, taking care to cite unemployment rates for minorities. He accused the press of trying to sabotage his presidency. He celebrated his declaration of a national emergency to order to obtain funding to build a wall on the southern border, inspiring a crowd chant of “build the wall.” He also had applause lines about promoting gun rights and opposing abortion.

In the crowd, at least one Trump supporter was in high spirits over the results of the Mueller investigation.

“It was a good week, and I’m glad it’s over with, and I’m ready to move on, and I think the country’s ready to move on,” said Colleen Boyer, who said she was attending her first Trump rally. But she added that she didn’t care if the report was released.

“I’m not that really interested, but if they bring it out, I’ll take a look at it,” she said.

However, some supporters were more enthusiastic.

“Oh, yeah, everything out in the open,” said John DeGroot, who was also attending his first Trump rally. “All this stuff should be released.”