The port of Haifa in northern Israel. The United States is concerned about a deal for China’s Shanghai International Port Group to build and control a shipping terminal in Haifa. 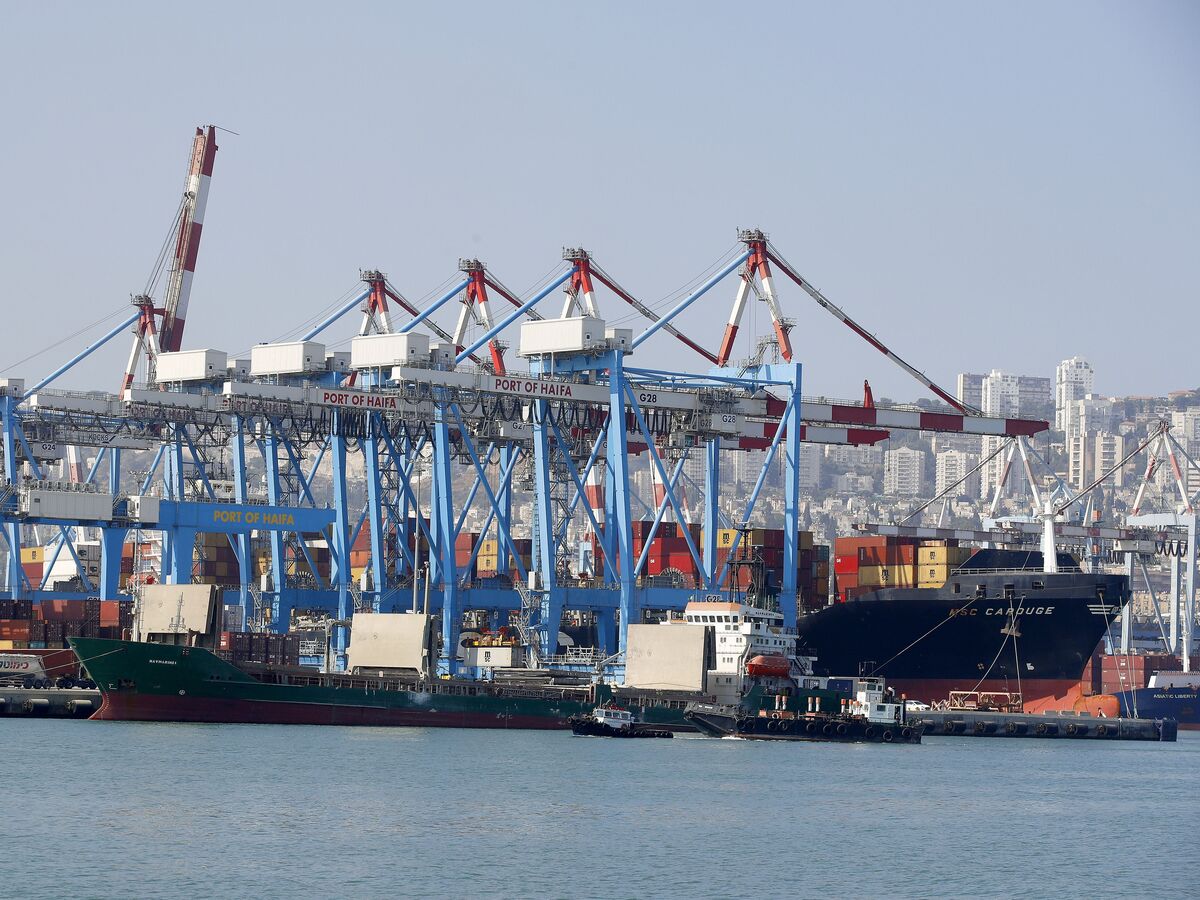 The port of Haifa in northern Israel. The United States is concerned about a deal for China’s Shanghai International Port Group to build and control a shipping terminal in Haifa.

The Trump administration has shown unwavering support for the Israeli government, except for one major criticism: China’s growing influence in the Israeli economy.

Chinese companies have invested in strategic Israeli infrastructure, from shipping to electricity to public transportation, and they have bought up millions of dollars in stakes in cutting-edge technology startups.

Where Israel sees an opportunity to access the world’s second-largest economy, the United States sees security threats posed by its main adversary.

“For us in the United States, the long-term threat from China is the greatest national security threat we face,” U.S. Undersecretary of Defense for Policy John Rood told a security conference in Herzliya, Israel, this summer. “China has tremendous ambitions and President-for-life Xi ambitions to be a global power and, over time, replace the U.S. as the preeminent global power.”

Some Israeli startups now have begun shying away from attractive Chinese investment offers, afraid that the U.S. could retaliate by barring them from operating in America down the line if they have any Chinese involvement.

“If certain systems go in certain places then America’s efforts to work alongside you will be more difficult, and in some places we won’t be able to do so,” Secretary of State Mike Pompeo said in an interview with Israeli television. “Intelligence sharing might have to be reduced, co-location of security facilities might have to be reduced, we want to make that sure countries understand this and know the risks.”

Israeli national security officials are working to form an oversight body, modeled after the Committee on Foreign Investment in the United States, to screen deals for risks. “A committee on foreign investment in Israel should be viewed as an essential means to protect Israel’s critical national assets from outside influence and possible damage, and nothing else,” Jacob Nagel, Israel’s former national security adviser, wrote in March.

The U.S. has tightened restrictions on Chinese investments in sensitive U.S. technologies, like quantum computing and artificial intelligence, and it has been urging allies to do the same. U.S. officials accuse Israel of dragging its feet, according to Axios.

“In our view, foreign investment in Israel — like foreign investment in the United States — should take place within the confines of strong regulatory structures that ensure all companies investing in Israel do so in a responsible manner, consistent with international practices,” State Department spokeswoman Morgan Ortagus told NPR. “Foreign investment should benefit the people of Israel, not undermine Israeli national security.”

In recent years, Israel and China have held talks for a bilateral free-trade agreement. Following a round of negotiations in January in Jerusalem, the Chinese Ministry of Commerce said, “Israel is an important partner in the Middle East and along the Belt and Road,” referring to China’s plan to invest in land and sea trade routes across several continents.

China is Israel’s largest trading partner in Asia and its third-largest worldwide, after the European Union and the U.S., according to the governmental Israeli Export Institute. Chinese investments and construction in Israel reached $12.19 billion between 2005 and 2019, according to the American Enterprise Institute. Last year, exports of electronic components from Israel to China increased by 80%, the Israeli Export Institute says.

“Israel and the U.S. have different threat perceptions with China,” said Assaf Orion, a retired Israeli army general who directs the China program at the Institute for National Security Studies, an independent Israeli research institute. “Israel is way tuned against its traditional enemies, and China is not one of our enemies.”

U.S. officials have warned countries to be wary of accepting Chinese help in their infrastructure, warning it could give China more power and stronger capabilities to spy. What makes the U.S. particularly concerned about China’s reach in Israel is that Israel holds some of the world’s most advanced technologies and shares a sensitive intelligence and defense relationship with the U.S.

One sore point is an empty platform jutting out into the Mediterranean Sea off the coast of Haifa — the site of a future shipping container terminal that Israel has invited a Chinese company, Shanghai International Port Group, to build and operate for 25 years. Israel expects this terminal to expand its shipping capacity, vital for the Israeli economy.

Next to the port is Israel’s main naval base, home to Israel’s submarine fleet. The U.S. is concerned because that’s where the U.S. Navy’s 6th Fleet conducts exercises and where it would be stationed to help Israel in the event of war. U.S. officials fear China could use the terminal to collect intelligence on U.S. military activities.

A U.S. spending bill put forth this summer said the Senate “has an interest in the future forward presence of United States naval vessels at the Port of Haifa in Israel but has serious security concerns with respect to the leasing arrangements of the Port of Haifa.” It calls to urge Israel to “consider the security implications of foreign investment in Israel.”

Shaul Chorey, a former deputy chief of the Israeli navy, thinks it was a mistake to give control of such strategic infrastructure to a foreign company, which could shut down the port during wartime, hurting Israel’s economy. “First, they can spy. Second, they can limit the activity of the harbor in case of emergency,” Chorev said, on a mountaintop in Haifa overlooking the port.

The port is not the only Chinese investment in the country. A Chinese state-owned company now owns a stake in an Israeli electric power plant, while another Chinese company is building a commuter light rail line in Tel Aviv, among other examples.

U.S. officials are concerned these projects give China an entry for intelligence gathering, and believe China is using the projects as a stepping stone to increased access to Western European markets, by proving its ability to meet Israel’s high-infrastructure standards.

“While we are not asking Israel to avoid dealing with China entirely, we have open discussions with all our closest allies and partners on the national security implications of Chinese investment,” Michael Mulroy, the deputy assistant secretary of defense for the Middle East, told The Atlantic. “The Department of Defense is concerned about China’s desire to erode U.S. military advantages, as well as China’s push for access and basing, use of economics to intimidate through the One Belt One Road initiative … and technology and intellectual property theft, acquisition and penetration.”

Chinese investments in Israeli tech startups shot up a few years ago in fields like cybersecurity, digital health and automated car technology.

“We were getting requests probably a couple of times a month of new investment deals, most of which went through,” said Simon Weintraub, a Tel Aviv lawyer who represents Israeli tech firms in negotiations with Chinese investors. His office in an iconic Tel Aviv skyscraper is decorated with gifts from Chinese business colleagues, like a cute panda picture hanging on the wall.

Amid a rift with the U.S. over Israeli sales of military technology to China, Israel adopted defense export restrictions in 2006. U.S. officials think Chinese access to cutting-edge technologies in Israel’s private sector can be adapted by China’s military, helping it compete directly with the U.S.

“The Chinese have shown interest in Israeli technology,” Rood said at the Israeli security conference. “In some areas where China has made investments or pursued activities around the world, the security services have followed or been a part of those dealings.”

Last month, China’s Ambassador to Israel Zhan Yongxin wrote in Israel’s Haaretz newspaper that China has “no ulterior motives” and criticized what he called “groundless accusations” that China intends to exploit its investments in Israel for intelligence and security threats.

Israel is not currently restricting its companies from accepting Chinese investments, and big investment deals continue. But some Israeli businesses are deciding on their own to refuse Chinese money, Weintraub said.

“I get calls all the time from Israeli companies who have either taken money previously from China or considering to take new investments from China,” Weintraub said. “They’re very nervous about taking money from China and somehow being under scrutiny in the United States.”

One Israeli health care technology company he represents recently turned down a multimillion dollar offer from a major Chinese venture capitalist, he said. The company, which works on sensitive medical records, is worried about being cut off from business with U.S. hospitals if it has Chinese investors.

This does not mean Israeli companies are abandoning China.

He said the company and others like it would get creative, seeking to set up a new corporate structure, such as a separate isolated entity in China that is firewalled from the rest of the company’s activities, to work with the country anyway, while avoiding red flags in the U.S.

“I know that China isn’t going anywhere. China is a superpower and a rising superpower,” Weintraub said. “Israel cannot ignore China and has to find a way to be part of that balancing act.”