‘The Time Has Come To Act’: Boris Johnson Takes The Helm As U.K. Prime Minister

Boris Johnson waves outside 10 Downing Street in London on Wednesday. The polarizing and showboating new prime minister has vowed to deliver on the U.K. leaving the European Union in October, whether or not a deal is reached. 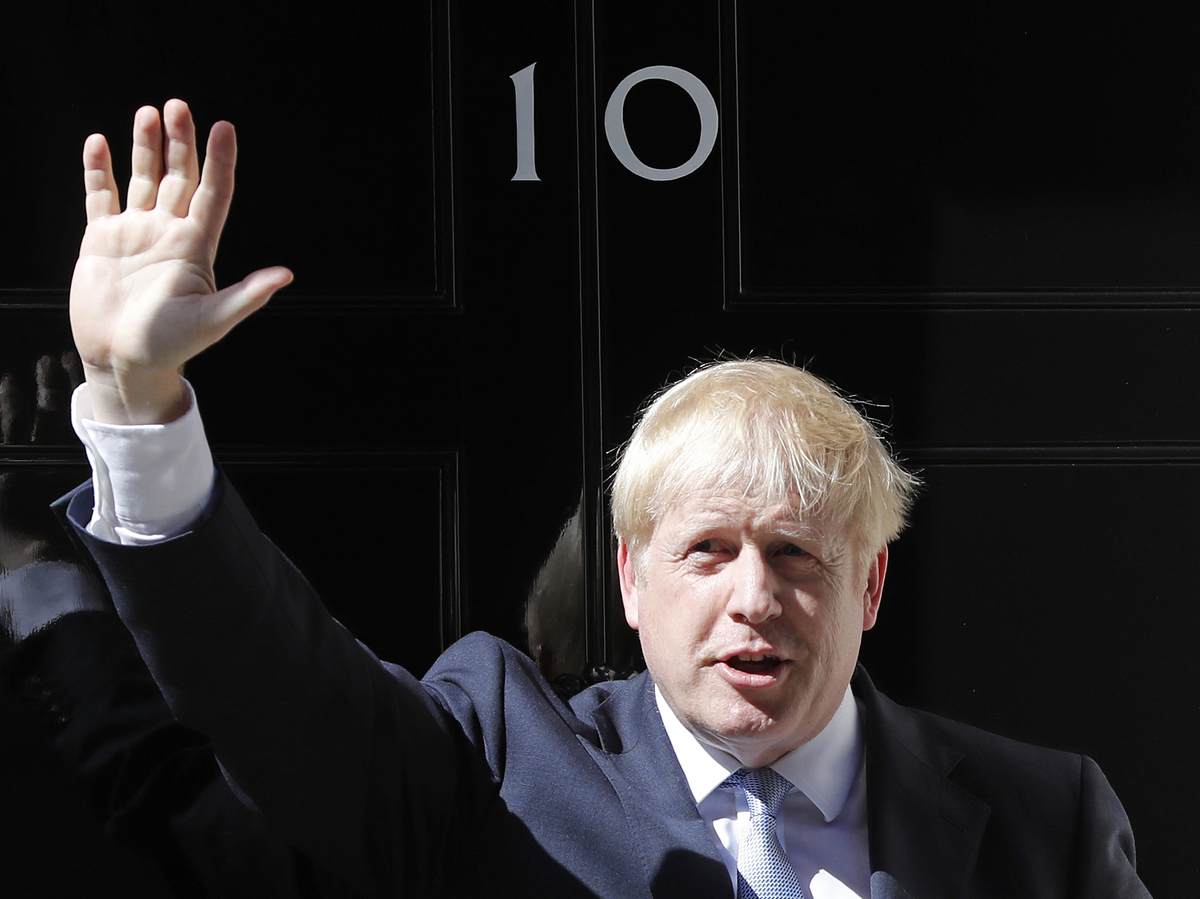 Boris Johnson waves outside 10 Downing Street in London on Wednesday. The polarizing and showboating new prime minister has vowed to deliver on the U.K. leaving the European Union in October, whether or not a deal is reached.

Boris Johnson, the polarizing and showboating politician who led the campaign for Britain to leave the EU in 2016, is now officially in charge of ushering the country through that fraught and difficult divorce. With Theresa May’s exit, Johnson took office as prime minister Wednesday.

“There are pessimists at home and abroad who think after three years of indecision that this country has become a prisoner to the old arguments of 2016, and in this home of democracy we are incapable of honoring a democratic mandate,” Johnson said, standing outside the prime minister’s residence at 10 Downing Street in London.

“I am standing before you today to tell you, the British people, that those critics are wrong,” he added in the consistently optimistic address. “The people who bet against Britain are going to lose their shirts.”

Johnson said he has every faith that the U.K. would succeed in obtaining a “better deal” from the EU, adding that “the time has come to act — to take decisions, to give strong leadership, and to change this country for the better.”

His predecessor resigned in May after failing to deliver Brexit, a process that’s been fraught with massive obstacles both domestically and in EU negotiations in Brussels.

Johnson, who rose to fame as a newspaper correspondent whose dispatches from Brussels railed against the EU, has previously served as mayor of London. He served as May’s foreign secretary but quit over disagreements about her handling of Brexit.

Before speaking to the public, Johnson had a private meeting at Buckingham Palace with Queen Elizabeth II, in an official ceremony where he took office. He now becomes the 14th prime minister to serve during the queen’s reign.

May leaves 10 Downing Street on Wednesday, where she delivered a farewell address before Johnson replaced her as prime minister.

As May stepped aside, she delivered a farewell address at 10 Downing Street.

“The immediate priority being to complete our exit from the European Union in a way that works for the whole United Kingdom,” May said. “With success in that task can come a new beginning for our country, a national renewal that can move us beyond the current impasse, into the bright future the British people deserve.”

May described her time in the role as a great honor, saying that “the heavy responsibilities are outweighed by the huge potential to serve your country.”

Before Johnson was sworn in, several cabinet ministers resigned from their posts, making it clear that they had no intention of working with him. When Justice Secretary David Gauke resigned, he said in a letter to May that “given Boris’s stated policy of leaving the EU by 31 October at all costs, I am not willing to serve in his Government.”

And Secretary of State for International Development Rory Stewart had repeatedly stated that he would not serve in Johnson’s government. He tweeted an image of a television headline saying that he had resigned, paired with an upside-down smiley face.

In Johnson’s speech, he doubled down on his earlier promise to leave the EU by the current deadline of Oct. 31.

“We’re going to fulfill the repeated promises of Parliament to the people, and come out of the EU on October the 31st, no ifs or buts,” Johnson declared. “We will do a new deal, a better deal.” He added later in the speech that the U.K. will also prepare for the “remote possibility” of leaving without a deal.

Despite his insistence that leaving on that day is possible, some analysts have suggested that it’s unlikely because of the tight timeline to renegotiate with the EU, and on the other hand, the sheer disruption that would happen if the U.K. left without a deal.

“I think despite the fact he’s been saying throughout this campaign do or die, we’re leaving on the 31st of October, I think that’s probably the first false claim that’s certainly going to be exposed by the passage of time,” George Parker of the Financial Times told NPR.

The EU’s top Brexit negotiator, Michel Barnier, said that the union is not willing to change the deal that was reached with May — but he said they are “ready to listen and to work” with the new prime minister, as Reuters reported.