A 6-month-old baby with measles at San Lazaro Hospital in Manila, Philippines. The country’s measles outbreak has been partly driven by distrust of vaccines after a dengue vaccine scandal. 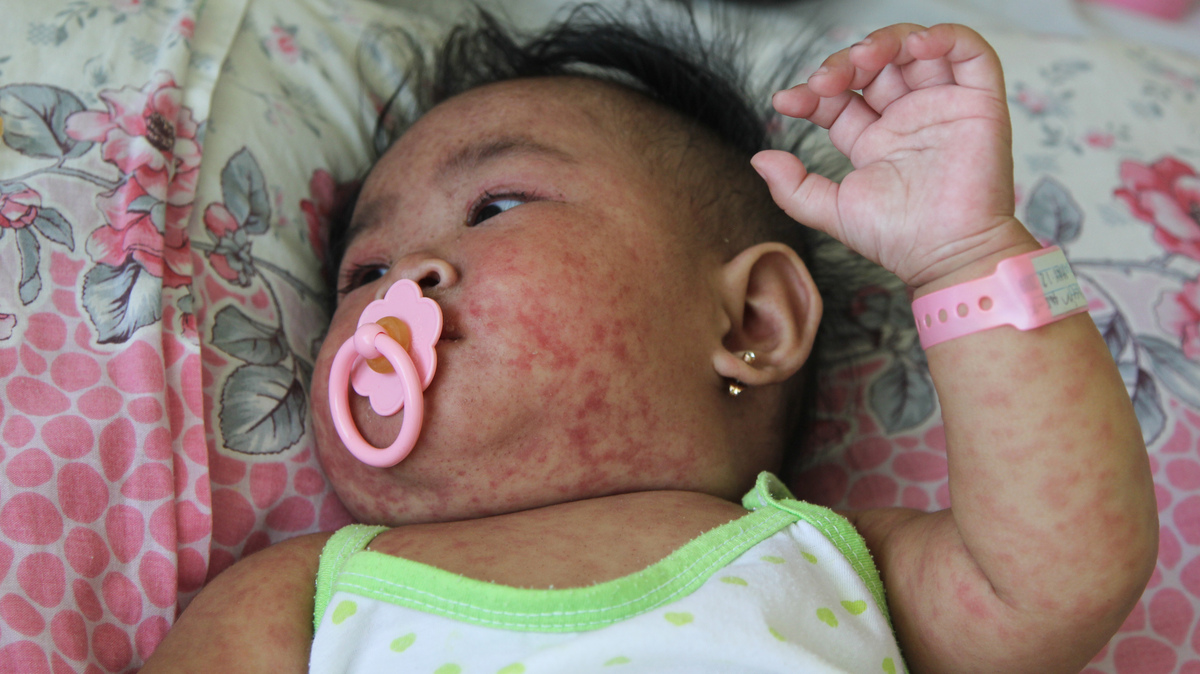 A 6-month-old baby with measles at San Lazaro Hospital in Manila, Philippines. The country’s measles outbreak has been partly driven by distrust of vaccines after a dengue vaccine scandal.

The measles outbreak got so bad in Manila, Philippines, that San Lazaro Hospital had to set up tents in the parking lot, the courtyard and even the landing at the top of the stairs outside the pediatric ward to house patients.

“This ward would only accommodate 50 patients,” says Dr. Ferdinand de Guzman, the head of family medicine at the hospital. “But at the height of the outbreak, [there were] 300 patients per ward.”

He says that at one point in February, there were three patients per bed in some measles wards at his hospital. They were being treated for the complications that the disease can bring.

“We had to limit admissions for other diseases and just admit measles cases,” he says.

At the Corazon Aquino Health Center in the Baseco neighborhood near the port in Manila, mothers register their kids for free childhood immunizations and checkups.

Fifteen years ago, the Philippines had nearly eliminated measles, but the virus has made a strong comeback. Since January, the Philippines has had one of the worst measles outbreaks in the world: more than 33,000 cases and 466 deaths from the vaccine-preventable disease. The outbreak has been driven by distrust of vaccines as well as by declining rates of routine childhood immunization in the sprawling island nation.

To try to contain the current outbreak, the government launched a massive nationwide measles vaccination campaign. Health workers inoculated 5.5 million people, mostly kids. The government hopes to immunize another 15 million by the end of September. The targeted vaccinations slowed the outbreak significantly, but the country continues to see hundreds of new cases each week.

Standing in a measles ward at San Lazaro Hospital, de Guzman says the hospital is now getting six to 10 new patients every day. Most are children.

Dr. Ferdinand de Guzman, head of family medicine at San Lazaro Hospital in Manila, says this measles outbreak was so bad that at one point this year there were three patients per bed in some measles wards.

An 8-year-old girl is lying on a hospital bed in a pair of bluejeans shorts and a faded T-shirt. She’s so dehydrated her lips are cracked.

“It’s a very classic case of measles,” de Guzman says. “The rashes start on the face at the hairline, then [go] down the whole body.”

The nurses have hooked up an IV drip to her foot but she rolls constantly from her fever, so they’ve had to secure the line with surgical tape.

In high-income countries where measles patients quickly get medical attention, deaths from the disease are rare. But in the Philippines and other less wealthy parts of the world, measles is still potentially fatal. In addition to the hundreds of kids who’ve died since January in the Philippines, measles has also claimed more than a thousand lives this year in Madagascar.

At the Corazon Aquino Health Center in Manila, a father holds a piece of gauze against his son’s arm. The 14-month-old had just been given an injection to immunize him against measles and rubella.

De Guzman says the most dangerous complication from measles is a type of pneumonia that if not treated quickly with antibiotics can be fatal.

The 8-year-old patient whom de Guzman is checking lives with her family in Manila North Cemetery, one of the oldest cemeteries in the capital. (In Manila, there are poor families living on the streets, in parks and even in cemeteries.)

“Most of the time the mothers will tell us that they’ve had their child immunized, because they’re afraid of being scolded,” de Guzman says. “Doctors usually scold the mothers. So they [the mothers] will say their children were given the vaccine, but it turns out they didn’t have the vaccine.”

Measles is a highly contagious airborne virus. It can linger in a room, an airplane or a bus for a couple of hours if an infected person coughs or sneezes. Health officials say that to effectively stop the spread of measles in a community, 95% of the population needs to be immune. The Philippines has never reached such a high vaccination coverage rate. Childhood immunization rates peaked in 2009 when 89% of kids were considered fully immunized, but that rate dropped to just 66% last year.

Why vaccination rates are so low

Several reasons explain why vaccination rates in the Philippines aren’t up to where public health officials say they need to be.

It’s a lower-middle-income country spanning more than 7,000 islands with a limited health care budget. So there’s the sheer difficulty of getting vaccines to everyone who needs them.

But there’s another reason behind the outbreak. The country suffered a major vaccine scandal two years ago that has left many Filipinos distrustful, even fearful of vaccines.

In 2016, the Philippines started a nationwide effort to immunize kids against dengue. The French pharmaceutical company Sanofi had just won approval for what health officials hoped could be a game-changing weapon against the brutal tropical disease.

But after almost a million kids got the new dengue shot, called Dengvaxia, the campaign was suddenly suspended. It had become clear that the vaccine could make some children susceptible to severe, even fatal dengue. The government revoked the license for the vaccine, brought criminal charges against officials responsible for the campaign and filed suit against Sanofi over the deaths of 10 youngsters.

“The impact of that controversy was all over the country, not just in the areas where they received the dengue vaccine,” says Leonila Dans, a clinical epidemiologist at the University of the Philippines Manila.

“The administration of the dengue vaccine eroded vaccine trust,” Dans says — and in her view that has made the current measles outbreak worse. “I’m not saying it’s the only cause, but it [loss of vaccine trust] exacerbated the problem of poor immunizations for the measles.”

Those low routine immunization rates made the Philippines ripe for a measles outbreak.

Further complicating matters is the way health officials try to bring an outbreak under control.

The plan is to run mass vaccination campaigns. Health workers try to reach everyone not yet immunized, particularly young kids, and revaccinate people in areas where there are large numbers of cases.

This is a huge logistical challenge for a sprawling country like the Philippines.

Then there are the issues of fear and mistrust. In some communities, villagers not only refused to be vaccinated, de Guzman says, but chased the vaccinators out of town.

“They would set the dogs on them and slam the doors,” he says.

Amelia Apang, a midwife and community health worker in an indigenous community north of Manila, checks the vaccination records of a local mom.

Amelia Apang is one of those community health workers — a midwife in a remote indigenous community called Nabuklod two hours northwest of Manila. Apang, who is from this community, says no one let loose their dogs on her.

But she says that convincing parents to immunize their kids was much harder after the Dengvaxia scandal.

“Because people are afraid,” Apang says.

She explains that in the local Aeta culture, there’s a belief that any harm that comes to your children will also come to you.

“Because of their culture, it means that if your child died because of vaccination, the parents, you, will also die,” she says.

She says that before the 1980s, no one in the villages around Nabuklod was immunized for anything. But slowly, things changed. She and other health workers knocked on doors, badgered mothers and brought vaccines directly to kids. Vaccination rates for many diseases in the community had been steadily increasing. Then the dengue vaccine scandal hit.

The fear wasn’t just about the dengue vaccine. Parents were refusing to have their kids get any injections. Even though no one in this village reported any problems from the dengue vaccine, some parents pulled their children out of school, angry at the teachers who’d organized the dengue vaccination campaign.

“They were threatening our teachers,” says Jocelyn Atun, the principal of the village elementary school. “Maybe … out of anger or out of emotional stress because of what is happening or what is being reported in the social media.”

Atun had to call in a doctor from the regional health office to help calm things down.

“They are now afraid to accept any vaccine for their children,” she says of the parents. “But I think eventually in the end, the issues about this Dengvaxia will be eliminated. Eventually they will let their children be vaccinated again. But it will take time to remove those issues from their minds.”

Even before the Dengvaxia scandal, childhood immunization rates had been in a steady decline in the Philippines, dropping from 89% of kids being fully immunized in 2009 to just 66% last year.

Dr. Anna Ong-Lim, a practicing physician who’s the head of the Pediatric Infectious Disease Society of the Philippines, says mothers have lots of reasons why they haven’t been getting their kids vaccinated. They’re too busy. They’re working. They forgot.

But one excuse was new this time around. “I had never heard people say, ‘Because I was scared.’ I’d never encountered that in the past.”

The dengue vaccine scandal undermined trust not just in vaccines, she says, but in the department of health overall.

In some villages, people are now even rejecting deworming pills that are part of an annual summer national blitz against parasites.

The worst of the outbreak seems to be over. The number of new measles cases each week is declining. In February and March, the country was recording more than 3,000 new cases each week. Now it’s down to a few hundred per week, which officially is still classified as an epidemic by the health department but is much better than the numbers in February. So the mass vaccine campaign appears to be working.

Ong-Lim says that once this outbreak is over, the next big challenge will be restoring public confidence in the health system. And she says there might be one silver lining to the current measles crisis.

“This measles outbreak is sad because kids have gotten sick and lots of kids have died,” she says. But the crisis also drew millions of Filipinos back into the health system, either to get vaccinated against measles or to treat their loved ones who’d come down with the disease.

“Hopefully that becomes the first of many other positive experiences that they have,” Ong-Lim says. “And that could be the key to rebuilding trust.”

At least in part, it appears that trust is starting to be rebuilt.

Over the last three months, health workers in the Philippines have vaccinated 5.5 million people against measles. The government hopes to inoculate a total of 20 million — one fifth of the population — by the end of September.