The Mueller Report Is Free To Read, But It’s Also A Bestseller

A day after the release of the redacted Mueller report, book versions of it occupied the top spots on Amazon’s bestseller list. 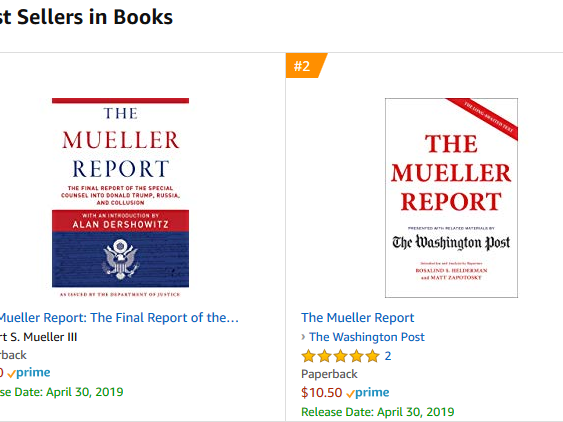 A day after the release of the redacted Mueller report, book versions of it occupied the top spots on Amazon’s bestseller list.

You can read the redacted Mueller report right now, free, on the Department of Justice website. Or you can read it here on NPR.org.

But perhaps reading 448-page PDFs isn’t your thing. Or you don’t have enough ink to print all those pages, and someone would notice if you stood next to the office printer for the next 45 minutes or so, adding new reams of paper, only to see it print out black boxes obscuring portions of the text from the public.

Well, you wouldn’t be alone: The Mueller report on the 22-month probe into Russia’s interference in the 2016 election is now a bestselling book, even though its contents are free and widely available.

A day after the report was released by the Justice Department, paperback versions occupied the top two spots on Amazon’s bestseller list.

The top spot is occupied by a version published by Skyhorse Publishing, which includes an introduction by Alan Dershowitz, a lawyer and Trump supporter who has been critical of the Mueller investigation.

“We have our typesetters sitting here doing it in a proper typographical way,” Gompertz tells NPR. “That’s a lot easier for people to read when it’s set nicely. We have a team of nine people that will be proofreading throughout the day and night if that’s what it takes.”

The second spot on Amazon’s list is occupied by a version of the report published by Scribner in partnership with The Washington Post. Their book includes extra content: a list of the major characters, major Justice Department filings and a timeline.

“We thought we could provide not just the Mueller report, but a lot of useful and valuable context around it, so that it would be all the more useful to readers,” Scribner Vice President and Editor-in-Chief Colin Harrison tells NPR.

A version of the report published by Melville House was at No. 9 on Amazon’s list Friday afternoon. That book contains only the report itself.

“It’s our belief that we should respect the reader and give them the report and nothing but the report,” Melville House Co-Publisher Dennis Johnson says.

But still, he says, he hopes a lot of people read it online. “That would be great. The more people that read it the better. But the fact of the matter is, not everybody has access to a computer. And reading it online may not be the ideal way to read it,” Johnson says.

There are are additional perks to physical books, too: They can assume a kind of weight that PDFs rarely do.

“I still have the copy of the Pentagon Papers that my parents bought for our home library thinking that was just an important historic document,” Johnson says. “And I’d like to think that this one is up there with that in importance.”