A stage full of Democratic presidential hopefuls in Miami. The two nights of debates underscored the changes within the party. 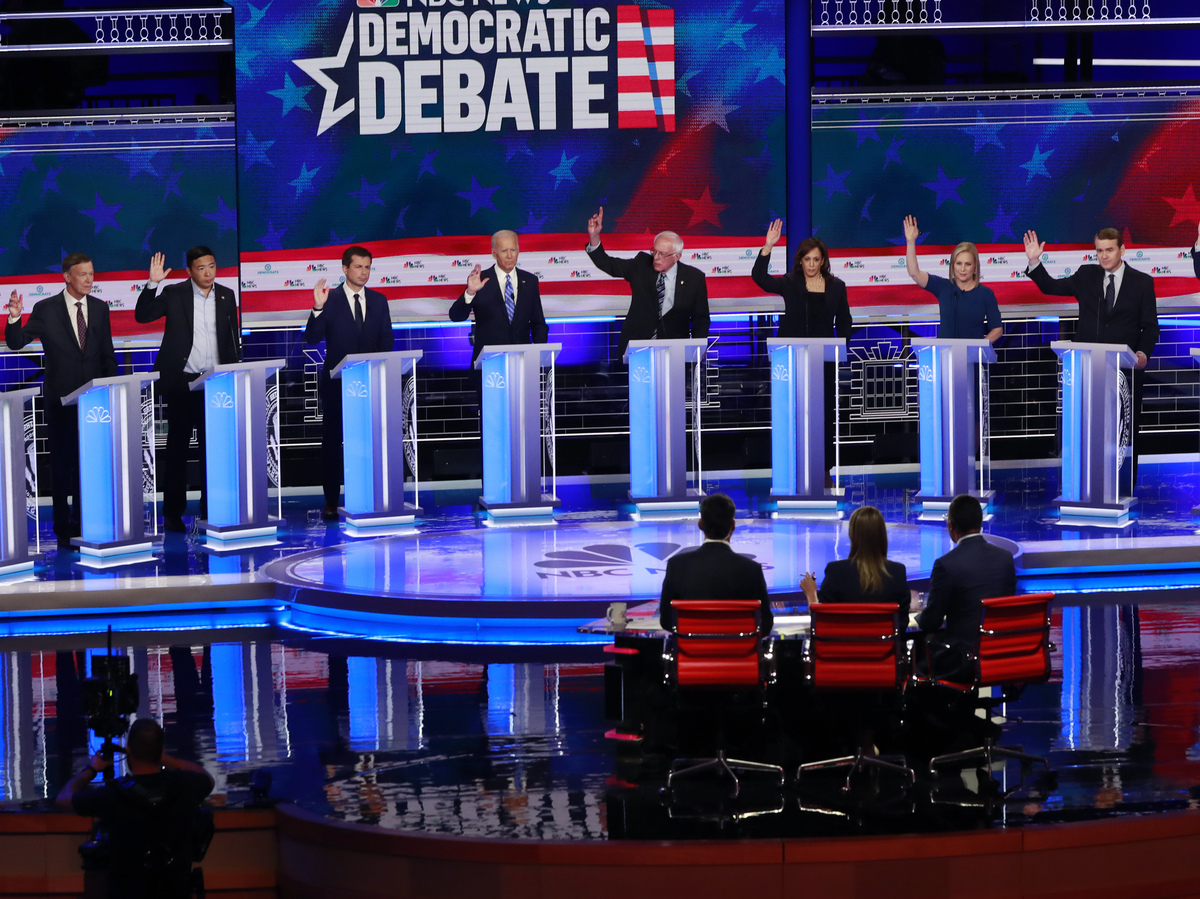 A stage full of Democratic presidential hopefuls in Miami. The two nights of debates underscored the changes within the party.

When history looks back on the first round of debates among Democrats in the 2020 presidential cycle, it will see a generational milestone.

Both nights of the twin bill in Miami put the spotlight on a national party in transition, loosening the bonds of its past and looking ahead to new personalities to propel its future.

Parties are about people, and also about ideas. The ideas openly discussed this week included free tuition at public colleges, new taxes on wealth and radical action to address climate change. They also included universal health care, medical coverage for undocumented immigrants and the phasing out of private health insurance.

But we all tend to remember candidate debates for their emblematic moments. And this time around, viewers may remember best the Thursday night confrontation between former Vice President Joe Biden, the best-known political commodity on stage, and Sen. Kamala Harris of California, who’s still a newbie at the national level.

In the matter of Harris v Biden

TV coverage featured Harris’ challenge to Biden’s posture on busing for integration — when he was a senator and Harris was a school girl at a bus stop.

Harris was among the first black students in her cohort bused to mostly white schools in an attempt to grant equal opportunities for education, a policy that Harris said helped her and which was bitterly controversial for millions of Americans.

Surely Biden had expected someone to raise his history of co-existence with Dixie-flavored Democrats in this debate. Yet he seemed thrown off balance by the onrush of Harris’ personal emotion. The prospective nominee of 2020 was clumsily enmeshed in an issue from the 1970s.

In fact, through much of the evening, Biden’s famous ebullience seemed to have deserted him, leaving a pale shadow of the personality he showed in previous presidential runs.

Many faces of a party moving left

That was the takeaway video from the second night. But both nights emphasized the Democratic Party’s commitment to change — progressive and even radical change – as well as its deep investment in the enfranchisement of women, the young and people of color.

The new faces on stage personified the change. Three were in their 30s, four in their 40s, with six women, five people of color and an Indiana mayor whose first answer included a mention of his husband.

The contrast could scarcely be starker with the party of President Trump, who has said his e-election campaign theme will be “Keep America Great.” And it is not just the president who sounds the theme and hearkens back to the America of earlier generations. The crowds at his rallies and the ranks of Republicans in Congress also continue to be dominated by older white males.

Given the inevitable and natural force of that contrast, the urgency of the new pulsed through all four hours of these candidate showcases, which brought together 10 candidates on each night and subjected them to promptings from a tag team of five NBC News personalities.

But while some of the journalists’ questions were pointed, the most memorable moments came largely at the initiative of the candidates. So it was when Harris sailed into Biden on the second night.

But if Biden is not the juggernaut some thought he’d be, who benefits? 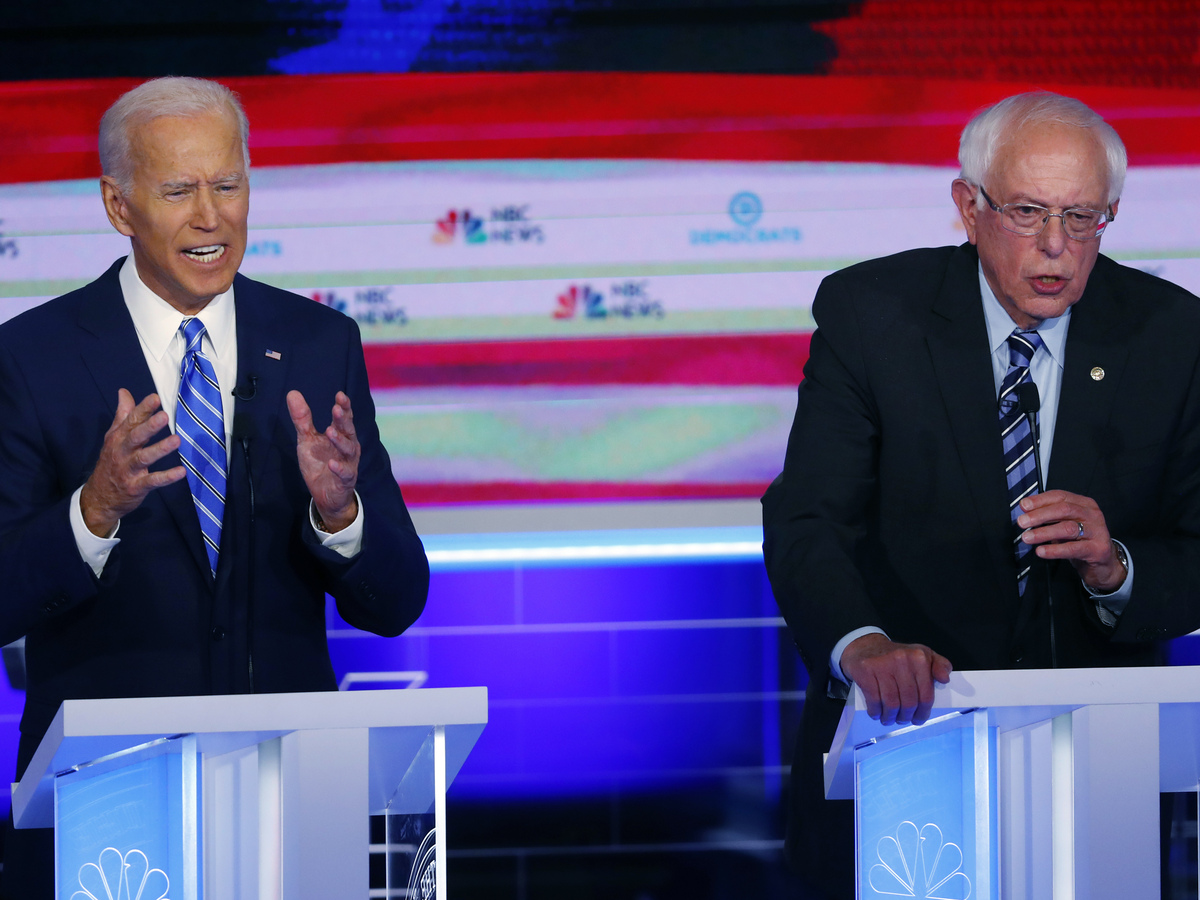 Standing between Biden and Harris on stage was the man who has run a strong second in the polls – Sen. Bernie Sanders of Vermont. At 77, Sanders is a year old than Biden and four years older than when he was when he took on Hillary Clinton in 2016.

Sanders benefited in that bid from his differences with Clinton and from the lack of any other competition after the first few debates in 2015. Sanders attracted many young people at the time who were disillusioned with Clinton or eager for something different.

The difference Sanders brought this week was not only reminiscent of his anti-capitalist rhetoric from four years ago – it was a near perfect reprise of it in style and substance. Nothing requires any candidate to evolve on a second go-round, but Sanders was notable for his lack of interest in doing so.

Running third in many polls has been Sen. Elizabeth Warren of Massachusetts, who at 70 is also third oldest among the candidates.

But Warren exudes physical and intellectual energy, often seeming to literally vibrate with ideas on a wide range of subjects. Her age notwithstanding, Warren has her gender and personal resume to identify her with change. So she came through the week among those seen as gaining ground.

But this time around, younger voters can find plenty of candidates who offer freshness far closer to their own age.

First and foremost among them is South Bend Mayor Pete Buttigieg, who at 37 is barely over the Constitutional requirement for the presidency. Buttigieg is the openly gay Indiana Democrat who came to Miami battered by racial confrontations and storm damage back home.

But in his direct and low-key way, he tried to use these travails to illustrate his candid approach to problems. His brief remarks on the subject had overtones of then-candidate Barack Obama’s race speech in March 2008 in the midst of the controversy over his outspoken pastor, Jeremiah Wright.

Although not especially prominent in the Thursday night debate, Buttigieg made his mark – as he has been doing throughout the year. In this he clearly stands above the other 30-somethings in the pack, Rep. Tulsi Gabbard of Hawaii and Rep. Eric Swalwell of California, both members of Congress seen as building name recognition for later career moves.

Another member who got on stage this week was Rep. Tim Ryan of Ohio, who is 45. 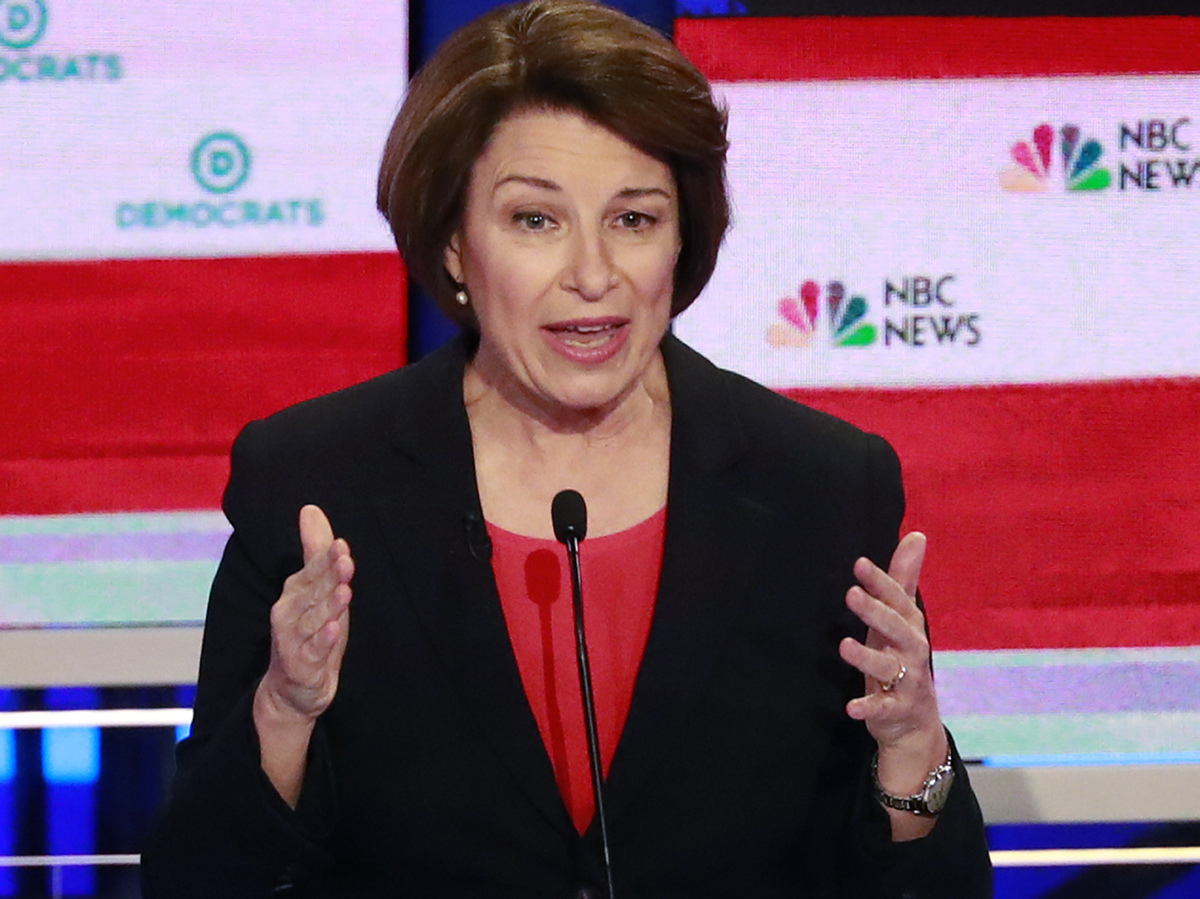 Some of the candidates in their 50s on stage this week could also be seen as newcomers in a more typical presidential field.

The first three of these had been seen as potential threats to the frontrunners. Each made an effort to be noticed this week, with Booker logging more minutes than any other contestant on Wednesday night and Klobuchar scoring points on women’s issues.

Gillibrand stood out on Thursday night by interrupting repeatedly in an effort to break through – a tactic also used by New York Mayor Bill de Blasio on the previous night, to mixed reviews.

In the end, Booker may have gained the most traction of this group, although the emergence of Harris on Thursday night might dilute some of his appeal to minority voters.

Also worth noting as generational players are the two Texans, both in their mid-40s, whose trajectories seemed to cross while headed in opposite directions this week.

On the rise is Julian Castro, 44, former mayor of San Antonio and secretary of Housing and Urban Development. Castro had been seen as a prospect for vice president, but he attracted more notice Wednesday night than in all the campaign to date.

Going the other direction is Beto O’Rourke, 46, a former member of Congress best known for a strong but unsuccessful Senate run against Sen. Ted Cruz in Texas. O’Rourke has thus far been missing the magic appeal he had in his home state last year, and his rather lackluster appearance this week did little to alter that.

Two once or current Western governors in their late 60s also joined the crowd.

One curiosity of the 2020 field is the inclusion of rather obscure candidates who might not have made the stage in another era but who bring something off-beat to the discussion.

John Delaney is a former congressman from Maryland who touts his business credentials and stands to the right of the pack on most issues. Delaney has been campaigning steadily since 2017 but has yet to make much headway in the polls, although he did qualify for this round of debates and may continue to do so.

Also in the caboose category are other “brand builders” such as author Marianne Williamson, a self-help guru who talks about love as a force in politics, and Andrew Yang, an entrepreneur who favors creating a base annual income of $12,000 for all adults.