A photo shows Jordan Anchondo (left) and her husband, Andre Anchondo, with two of their children. The couple died last weekend when a gunman stormed a Walmart in El Paso, killing at least 22 people and wounding more than two dozen others. 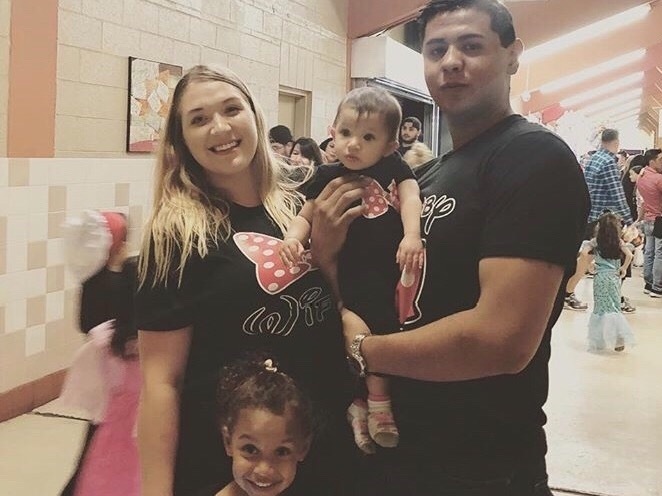 A photo shows Jordan Anchondo (left) and her husband, Andre Anchondo, with two of their children. The couple died last weekend when a gunman stormed a Walmart in El Paso, killing at least 22 people and wounding more than two dozen others.

Andre and Jordan Anchondo were expecting houseguests for a barbecue last Saturday. It was supposed to be a triple celebration. Andre had just finished building their new home, the couple was celebrating their first wedding anniversary and their daughter was turning 6.

Before the barbecue, they dropped by Walmart to grab school supplies and food for the party. But all of their plans and celebrations shattered in an instant of violence.

A man with a gun entered the store and opened fire, killing the Anchondos and at least 20 others in an attack federal prosecutors are treating as domestic terrorism and a potential hate crime.

Andre Anchondo died protecting Jordan; she died shielding their 2-month-old baby, Paul, who was grazed by a bullet but survived the shooting.

As President Trump headed to El Paso on Wednesday and the grieving communities held vigils to mourn the dead, Andre’s older brother and father were back at work in the family’s auto shop, figuring out how to press on.

“It’s gonna be rough without my brother being there,” Tito Anchondo told NPR. “We just have to keep moving forward, and that’s the reason we’re open right now because the bills don’t stop and we have jobs here that still need to be finished.”

As the country responds and his community reacts to the tragedy, Tito is watching his own family mourn. “My dad is very Mexican macho. He doesn’t like to show emotion. I’m sure he’s cried by himself,” he said. His mother is inconsolable and “just in tears all the time.”

A family photo taken on Aug. 1 shows El Paso shooting victim Andre Anchondo (right) with his older brother Tito (left) and their father, Gilbert. The picture was taken at their father’s auto body shop just two days before Andre Anchondo and his wife were killed by a gunman during a mass shooting in El Paso.

Tito said one way he has decided to deal with the loss is to talk about his brother and tell his story. “My brother always looked up to me, but one thing that he never knew was that I looked up to him …,” Tito said. “That’s why I like talking about him a lot because he meant so much to me. I tried to be like him even if he didn’t know that.”

Andre started his own shop installing granite countertops and renovating kitchens while Jordan stayed at home to care for their three children. Jordan had two of the children from earlier relationships. Paul, the Anchondos’ first child together, was born in May.

“It takes a special kind of person, also, to adopt other children that aren’t yours,” Tito said. “But he was a great brother, a great son, a great husband. Jordan as well was a great wife. She helped him stay strong.”

Leta Jamrowski, Jordan’s sister, remembers her as a hero.

“[Paul] pretty much lived because she gave her life,” Jamrowski told The Associated Press.

Tito says he would like to take Paul in. The grieving brother feels a responsibility to look after the baby and needs “to tell him that his father died a hero saving his life.”

A family photo shows baby Paul, the 2-month-old infant son of El Paso shooting victims Andre and Jordan Anchondo. The baby was reportedly grazed by a bullet and is recovering from broken fingers.

On Wednesday, President Trump visited El Paso and Dayton, Ohio, to meet with survivors of the weekend massacres. Though the president has been met by protesters, some of whom think he helped incite the violence in El Paso with his language about immigrants, Tito sees it differently.

“I can see why people would believe that,” Tito says. “And yes, maybe he said things in bad taste. But I think people are misconstruing President Trump’s ideas.”

Tito Anchondo says his family has always been Republican conservatives. “My brother was very supportive of Trump,” he said, adding that he would like to sit down with the president and tell him about their pain.

“I want to see his reaction in person,” he said. “I want to see if he’s genuine and see if my political views are right or wrong. And see if he feels maybe some kind of remorse for statements that he’s made. I just want to have a human-to-human talk with him and see how he feels.”

This story was produced and edited by Danny Hajek and Taylor Haney with assistance from Matt Kwong.