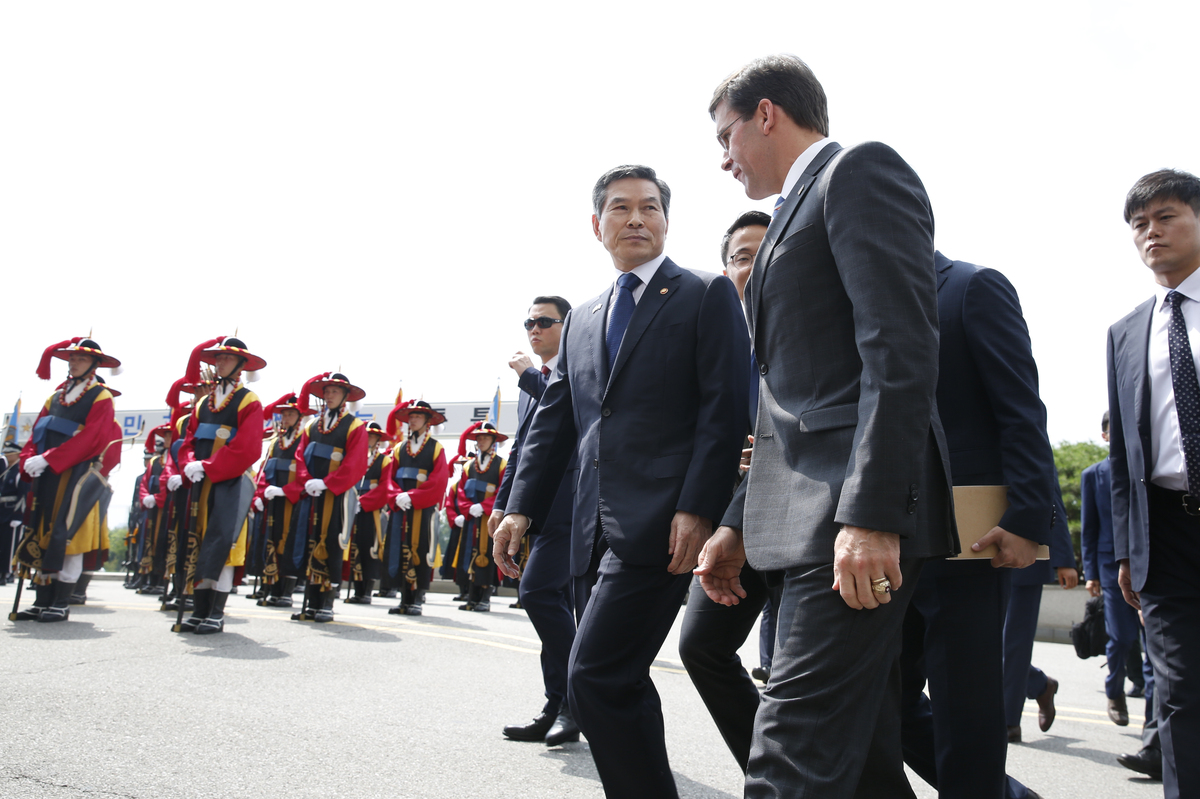 Defense Secretary Mark Esper has wrapped up his first trip to Asia since assuming office last month, focusing on shoring up U.S. alliances in the region.

The U.S.-South Korea alliance “is ironclad remains the linchpin of peace security on the Korean Peninsula in Northeast Asia,” Esper said on Twitter, after meeting in the South Korean capital, Seoul, with Defense Minister Jeong Kyeong-doo.

Esper and Jeong “reaffirmed their commitments to supporting their diplomatic efforts for the complete denuclearization of the Korean Peninsula and the establishment of a lasting peace,” according to a joint statement quoted by the Yonhap News Agency.

The agency also reported that Esper encouraged the country to participate in a security coalition in the Strait of Hormuz near Iran.

Esper’s Asia tour comes as the U.S. alliance structure is under pressure from internal divisions and major external powers such as Russia and China. The trip also signaled a possible shift in the military balance in the region, when Esper publicly called for the U.S. to deploy land-based, intermediate-range missiles in Asia.

Jeong acknowledged to Esper that a snowballing trade fight between Japan and South Korea was undermining security cooperation among those countries and the U.S., a three-party alliance at the center of the Asian security structure the U.S. built in the aftermath of World War II.

Seoul is considering pulling out of a 2016 intelligence-sharing agreement with Japan, following Tokyo’s decision to downgrade trade ties and impose export restrictions on South Korea.

South Korea has agreed to pay substantially more money to the United States in order to defend itself from North Korea. Over the past many decades, the U.S. has been paid very little by South Korea, but last year, at the request of President Trump, South Korea paid $990,000,000..

Another rift within the alliance stems from the Trump administration’s quest to get Seoul to shoulder more of the financial burden of basing U.S. troops in South Korea. President Trump tweeted ahead of Esper’s visit that Seoul had agreed to pay more and negotiations had begun. The South Korean government said the talks had in fact not yet started. It is not clear whether Esper raised the issue with his hosts.

Externally, the alliance is under pressure from North Korea, which has launched salvos of short-range missiles, partly in protest against U.S.-South Korean joint military exercises that began this month — even though Seoul and Washington scaled down the drills to avoid offending the North Korean government.

Russia and China also appear to be probing the alliance for potential weak spots. Their joint overflight late last month of islands claimed by both South Korea and Japan was unprecedented and prompted South Korea to fire warning shots at a Russian military plane.

Notably absent in Seoul was discussion of the issue of a U.S. deployment of land-based, intermediate-range missiles to Asia, which has sparked debate across the region.

Speaking en route to Australia last week, Esper said he would like to see the missiles deployed in a matter of months, although he admitted it might take longer.

The remarks came a day after the U.S. withdrew from a treaty banning the use of certain missiles. The U.S. says Russia was violating the Intermediate-Range Nuclear Forces Treaty, signed by the U.S. and the Soviet Union in 1988. Moscow denies violating the pact.

The Pentagon is considering putting intermediate-range missiles in Asia partly because it is worried, analysts believe, about the growing threat of missiles that North Korea, China and Russia have to aim at U.S. forces in Asia.

The land-based missiles would give the U.S. another way to deliver its lethal loads and perhaps be cheaper than its existing air- and sea-based projectiles, says Vipin Narang, a political scientist at the Massachusetts Institute of Technology. It would keep adversaries busy with additional threats to target or guard against.

And it would probably be a lucrative contract for whichever arms merchant is tapped to supply the weapons. That point is likely not lost on Esper, who worked as a lobbyist for missile-maker Raytheon just before assuming his current post.

The U.S. says the weapons would be conventional, and defensive in nature. But China will not see it that way, Narang predicts.

“They’re targeting our forward bases and operating presence in what they believe is essentially their sphere of influence,” the MIT associate professor explains. “But we will be targeting their homeland. And that is highly escalatory.”

China has threatened countermeasures and warned Japan and South Korea not to host the missiles. The authorities in Beijing may feel about as safe with U.S. missiles on their doorstep as the Kennedy administration felt about the Soviet Union putting nuclear weapons in Cuba in the 1960s.

“If we host intermediate-range missiles, China and Russia will in return deploy and aim their ballistic missiles at South Korea,” something he says they are currently not doing.

“Business leaders here fear a repeat of the economic retaliation that Beijing directed against South Korea for the deployment of the THAAD missile defense system,” notes Leif-Eric Easley, a professor at Ewha University in Seoul. Easley is referring to the Terminal High Altitude Area Defense that the U.S. set up in South Korea in 2017.

“Most of all,” he adds, “the Moon administration is loath to be seen as teaming up with Washington and Tokyo either to balance China or to contain North Korea.”

South Korea’s government says that when it agreed to deploy the THAAD system, Seoul and Washington had a mutual understanding that no missiles would be put in the South that could reach beyond the Korean Peninsula.

But not everyone in South Korea buys the Moon administration’s explanations.

The former vice chairman of South Korea’s Joint Chiefs of Staff, Lt. Gen. Shin Won Sik, argues that what the country needs is not more missile defenses but a stronger deterrent, including possibly basing U.S. nuclear weapons in South Korea.

“Reinforcing the U.S.-South Korea-Japan alliance with this missile deployment and a nuclear sharing agreement will make it easier and faster for us to denuclearize North Korea,” says Shin, who is currently a research professor at Korea University in Seoul. “Even if that fails, such measures would give the U.S. and its allies a nuclear balance against China, Russia and North Korea.”

Shin confides, though, that he is worried the Trump administration appears unconcerned about North Korea’s recent test of missiles, which can hit South Korea but not the continental United States. Shin says he does not want to see his country sacrificed to protect the U.S. mainland.