Taliban Says It Is Meeting With U.S. Officials, Amid Escalating Peace Efforts

Sher Mohammad Abbas Stanakzai, a representative of the Taliban, attends international talks in Moscow last month. On Monday, the Islamist militant group announced that its representatives would be having conversations with the U.S. in the United Arab Emirates. 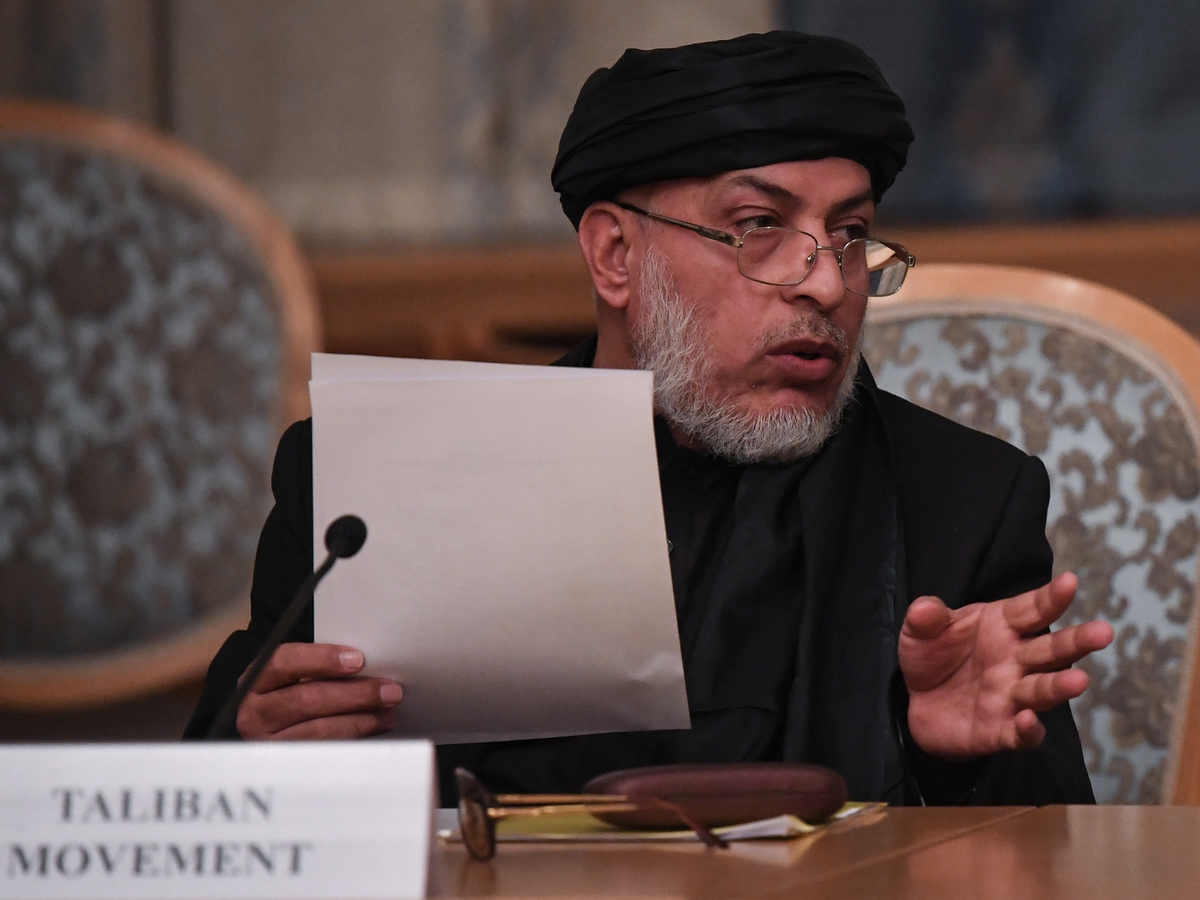 Sher Mohammad Abbas Stanakzai, a representative of the Taliban, attends international talks in Moscow last month. On Monday, the Islamist militant group announced that its representatives would be having conversations with the U.S. in the United Arab Emirates.

U.S. officials are meeting with representatives of the Afghan Taliban for talks in the United Arab Emirates, the Islamist militant group announced Monday. The meeting, which was expected to include delegates from Saudi Arabia, Pakistan and the UAE, would mark a new step forward in tenuous peace negotiations.

The Taliban added, however, that it had no intention of meeting with members of the internationally recognized Afghan government.

“There is no plan of holding a meeting with representatives of the Kabul administration and neither are they present in the meeting being attended by the delegation of Islamic Emirate,” spokesman Zabihullah Mujahid said in a Taliban statement Monday, referring to the organization by the name it used for its government in Afghanistan from 1996 to 2001.

It was late in 2001, after the Taliban was found to be harboring al-Qaida leader Osama bin Laden, that the U.S. overthrew the group and helped install a new government in Kabul. In the 17-year war that has followed, the longest in U.S. history, the Taliban has frequently refused to negotiate with a state it regards as a puppet of a foreign power — and it rejected media reports that Afghan government officials were involved in Monday’s talks.

“Rumors being heard in this regard is mere propaganda, our countrymen should not pay it any heed,” Mujahid said.

The U.S. Embassy in Kabul, meanwhile, has not publicly confirmed Monday’s meeting. But the State Department noted earlier this month that the special representative for Afghanistan reconciliation, Zalmay Khalilzad, was embarking on an 18-day trip that included stops in the UAE, as well as Pakistan and Afghanistan.

“He will meet with Afghan government officials and other interested parties to support and facilitate an inclusive peace process in Afghanistan, empowering the Afghan people to decide their nation’s fate,” the State Department said at the time, remaining vague about the parties Khalilzad planned to meet.

The visit comes at something of a dissonant time for Afghanistan, which has seen the acceleration of peace talks abroad even as violence remains rampant within its own borders. The Taliban has launched coordinated attacks across the country in recent weeks, pushing back Afghan forces even as the U.S. maintains an active airstrike campaign against the Taliban’s senior leadership.

Last year, Afghanistan surpassed Iraq as the country with the most deaths caused by terrorism, according to a recent study. The Global Terrorism Index said Afghanistan accounted for a quarter of all the world’s deaths from terrorism in 2017, and that the Taliban was responsible for hundreds of attacks during the year.

At the same time, hopes for peace have also grown.

Khalilzad has held at least two previous meetings with Taliban officials, according to Reuters. And Hamdullah Mohib, the national security adviser to Afghan President Ashraf Ghani, said Monday that U.S. officials had game-planned the day before with representatives from the Kabul, the UAE and Saudi Arabia.

“We discussed President [Ghani’s] road map for peace presented at Geneva,” Mohib tweeted, as well as how to foster direct engagement between the Taliban and Kabul for an “intra-Afghan dialogue.”

Ghani has pressed hard for a peace agreement since the start of the year — unilaterally offering concessions to the Taliban, including recognition as a legitimate political party and proposing cease-fires, with only minimal success.

In his most recent move, the Afghan president announced the formation of an “advisory board for peace,” which held its first meeting at the presidential palace Monday. It’s opening message was simple: The Afghan government must be part of any negotiations with the Taliban going forward, regardless of Taliban objections.

Abdullah Abdullah, the country’s chief executive, “asserted that government is the only institution authorized to conduct the negotiations,” according to Ghani’s office.

Mahmoud Saikal, the Afghan ambassador to the United Nations, expressed optimism at a news conference Monday that the international efforts represent “some unprecedented opportunities when it comes to the peace of Afghanistan.”

“So we are hopeful,” he added, “that we will enjoy the support of all the stakeholders.”