People rally in front of the Supreme Court on March 26 as the court hears arguments in redistricting cases. The court ruled that partisan redistricting is a political question, not one that federal courts can weigh in on. 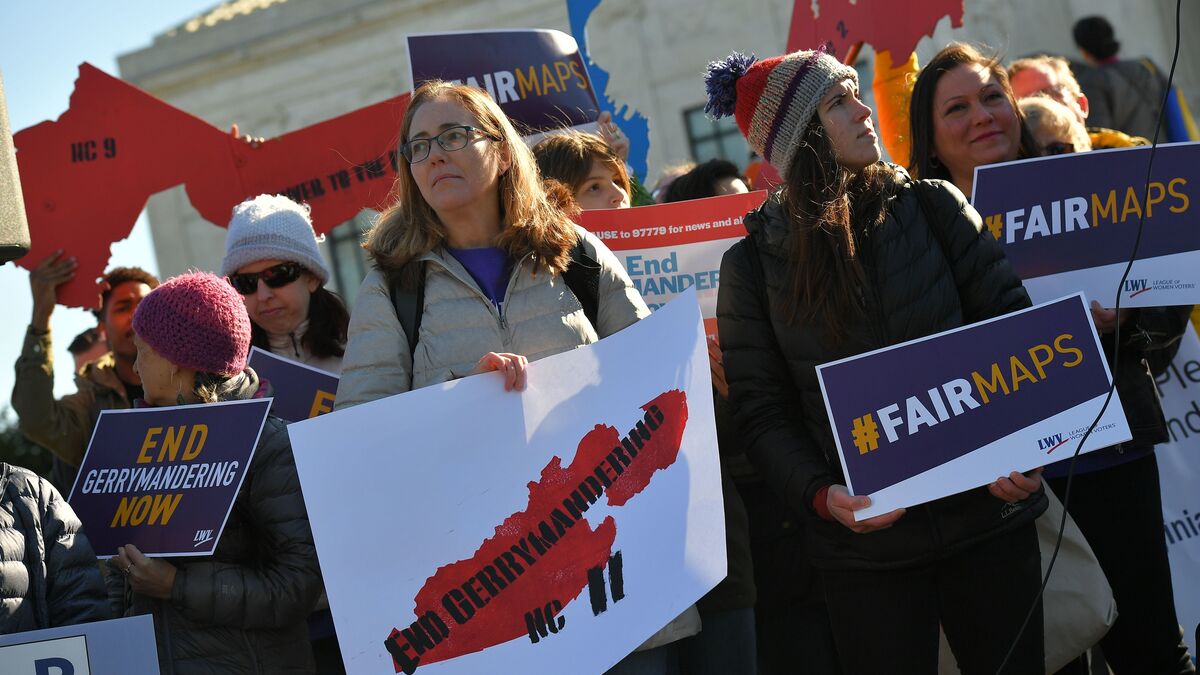 People rally in front of the Supreme Court on March 26 as the court hears arguments in redistricting cases. The court ruled that partisan redistricting is a political question, not one that federal courts can weigh in on.

In a 5-4 decision along traditional conservative-liberal ideological lines, the Supreme Court rules that partisan redistricting is a political question, not reviewable by federal courts and can’t judge if extreme gerrymandering violates the constitution.

“We conclude that partisan gerrymandering claims present political questions beyond the reach of the federal courts,” Chief Justice Roberts wrote for the conservative majority. “Federal judges have no license to reallocate political power between the two major political parties, with no plausible grant of authority in the Constitution, and no legal standards to limit and direct their decisions.”

The court’s ruling came in two cases. In Maryland, Democrats who controlled the state legislature drew new lines for congressional districts to eliminate one of the state’s two GOP seats in the U.S. House of Representatives; and in North Carolina, where Republicans controlled the state legislature, they used the same tactics to isolate and limit Democratic power, and maximize their own.

Prior to Justice Brett Kavanaugh’s appointment to the Supreme Court, Justice Anthony Kennedy was the swing vote on this issue. He seemed open to limiting partisan redistricting if the court was presented with a “manageable standard.” But with Kavanaugh on the court, the search for that standard is over.

“Technology is both a threat and a promise,” Kennedy has written in a prior case, noting that with the advent of computer technology, the temptation to leverage partisan advantage would “only grow” — unless constrained by the courts.

That temptation was clear in North Carolina. Although voters in the state are split roughly equally between Republicans and Democrats, the Republican-controlled state legislature openly drew congressional district lines to maximize their partisan advantage.

As Republican David Lewis, the chairman of the state legislature’s redistricting committee, put it, “I propose we draw the maps to give an advantage to 10 Republicans and 3 Democrats, because I do not believe it is possible to draw a map with 11 Republicans and 2 Democrats.”

Republicans managed to both maximize their advantage and minimize Democratic power by drawing district lines to pack as many Democrats as possible into three districts, and then cracking other potentially Democratic districts in half or thirds, diluting the Democratic vote to create safe Republican districts.

The League of Women Voters, one of the challengers in the case, pointed out that the GOP had even split predominantly Democratic Greensboro so that half of the dorms at historically black North Carolina AT State University were put in one Republican district, and half in another.

Adding another twist to the North Carolina case is the recent unearthing of hard drives belonging to Republican redistricting expert Dr. Thomas Hofeller, who drew the original 2016 map for the GOP. This month those challenging the redistricting map filed papers in the lower courts, alleging that Hofeller’s own words on his hard drive demonstrate that North Carolina Republicans used deceptive and improper tactics in their redistricting efforts.

In a 2016 case, the Supreme Court struck down the GOP redistricting map as an unconstitutional racial gerrymander. Those maps were nonetheless used in the 2018 election because Republican lawmakers told the lower courts that they had not done any preparation to redraw the maps, and would need considerable time to do so.

The newly discovered Hofeller hard drive, however, contains amended Senate and House maps that were nearly complete more than a year before the 2018 elections, according to documents filed by the plaintiffs suing to overturn the maps.

In addition, despite the prohibition on using racial data in redistricting, Dr. Hofeller included “the racial composition of the proposed districts for each and every iteration of his draft maps,” according to the challengers. They argue that these files indicate that North Carolina Republicans misled the lower courts in order to continue using a map in 2018 that was unconstitutionally gerrymandered along racial lines.

Justice Elena Kagan, writing for the court’s four liberals, noted in an impassioned dissent: “Of all times to abandon the Court’s duty to declare the law, this was not the one. The practices challenged in these cases imperil our system of government. Part of the Court’s role in that system is to defend its foundations. None is more important than free and fair elections. With respect but deep sadness, I dissent.”