Flavored vaping solutions stand displayed at a shop in New York City. Amid a mysterious health scare apparently caused by e-cigarettes, New York and Michigan have banned the sale of flavored vaping products, while Massachusetts has banned all of them for four months — moves that store owners say will hurt their bottom line. 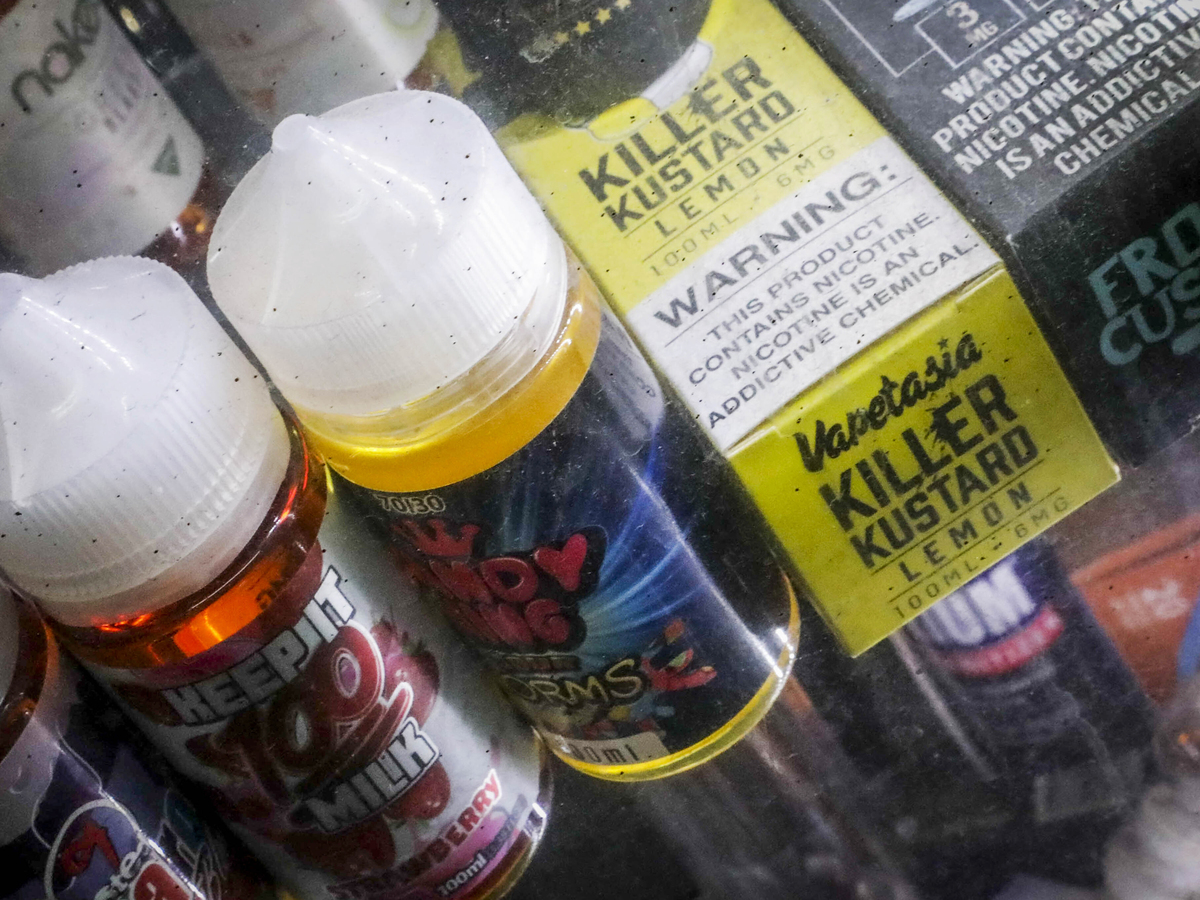 Flavored vaping solutions stand displayed at a shop in New York City. Amid a mysterious health scare apparently caused by e-cigarettes, New York and Michigan have banned the sale of flavored vaping products, while Massachusetts has banned all of them for four months — moves that store owners say will hurt their bottom line.

The recent numbers of vaping-related illness are alarming, at best; at worst, in the eyes of federal officials, the U.S. is embroiled in a deadly, mysterious and “ongoing outbreak” across the country.

In its latest estimates, the Centers for Disease Control and Prevention has tied the use of electronic cigarettes to more than 800 cases of serious lung disease in 46 states and the U.S. Virgin Islands, a dozen of which have ended in death.

But in Massachusetts, where Gov. Charlie Baker earlier this week declared a public health emergency, some store owners fear the severity of state officials’ response as much as the outbreak itself. One vape store owner, Behram Agha, filed a lawsuit Thursday against officials at the Massachusetts Department of Public Health, seeking an injunction to lift Baker’s immediate four-month ban on the sale of all vaping products in the state.

In his complaint, Agha called the move “arbitrary and capricious,” saying it was “enacted and enforced without sufficient notice and opportunity” for business owners entitled to a public hearing. Since his store, Vapor Zone, sells only e-cigarettes and other vaping items, he fears for the survival of his business.

“The long and the short of it is that if this ban should remain in effect for four months, then a majority of the shop owners that I’ve spoken with indicate that they’re not going to be able to survive for longer than a week or two,” his lawyer, Craig Rourke, tells NPR. Since the lawsuit’s filing on Thursday, Rourke says, several other store owners have expressed interest in joining it. “This is, in effect, a death sentence for their business.”

The controversy is not unique to Massachusetts.

Earlier this week another vape shop owner filed a similar lawsuit in Michigan, which three weeks ago became the first state to announce a temporary ban on flavored vaping products. New York and Rhode Island also joined Michigan in announcing temporary bans on flavored e-cigarettes — though Massachusetts’ move is the most wide-ranging to date, including the prohibition of online and retail sales of marijuana and nicotine vaping products of all stripes.

The Massachusetts governor’s office did not immediately respond to NPR’s request for comment, though a spokeswoman for the office told the Boston Globe that Baker’s administration does not comment on pending lawsuits.

“The purpose of this public health emergency is to temporarily pause all sales of vaping products so that we can work with our medical experts to identify what is making people sick and how to better regulate these products to protect the health of our residents,” Baker explained in a statement released Tuesday.

At that time 61 cases had been reported to the state’s Department of Public Health.

“All patients have a reported history of e-cigarette product use, and no consistent evidence of an infectious cause has been discovered. Therefore, the suspected cause is a chemical exposure,” the CDC said in its latest report on the outbreak Thursday.

Still, the federal agency has not yet gotten to the bottom of what’s behind the illness, which has hospitalized a majority of patients with a variety of different symptoms — including significant breathing difficulties, weight loss and multiple kinds of pneumonia.

“We do not yet know the specific cause of these lung injuries,” the CDC said. “The investigation has not identified any specific e-cigarette or vaping product (devices, liquids, refill pods, and/or cartridges) or substance that is linked to all cases.”

Rourke says that given the uncertainty around the situation, Baker’s ban, while well-meaning, was done hastily and “in a manner that was broad and oversweeping.”

“I think what’s most important is the process. Cornerstone to our legal process is notice and opportunity, and we’d love to share and join into that argument so there could be a full and free discussion of ideas and exchange of information and evidence,” he says, noting that Massachusetts Cannabis Control Commissioner Shaleen Title also blasted the move.

“This is a terrible decision. Purposely pushing people into the illicit market — precisely where the dangerous products are — goes against every principle of public health and harm reduction,” Title tweeted Tuesday. The ban includes cannabis vaping products as well as those using nicotine. “It is dangerous, short-sighted, and undermines the benefits of legal regulation.”

Rourke also warns that the matter may not rest with Suffolk Superior Court alone. He says that since vaping products are regulated by the Food and Drug Administration, a federal agency, “Governor Baker’s action has prevented the federal government’s authority and violated the Commerce Clause.”

“So,” he adds, “it looks like the Federal Court might be a more appropriate venue and jurisdiction for these matters.”