Afghan workers move ballot boxes to trucks getting ready for Saturday’s presidential elections in Kabul, Afghanistan. The lead-up to the vote has been marred by violence and uncertainty. 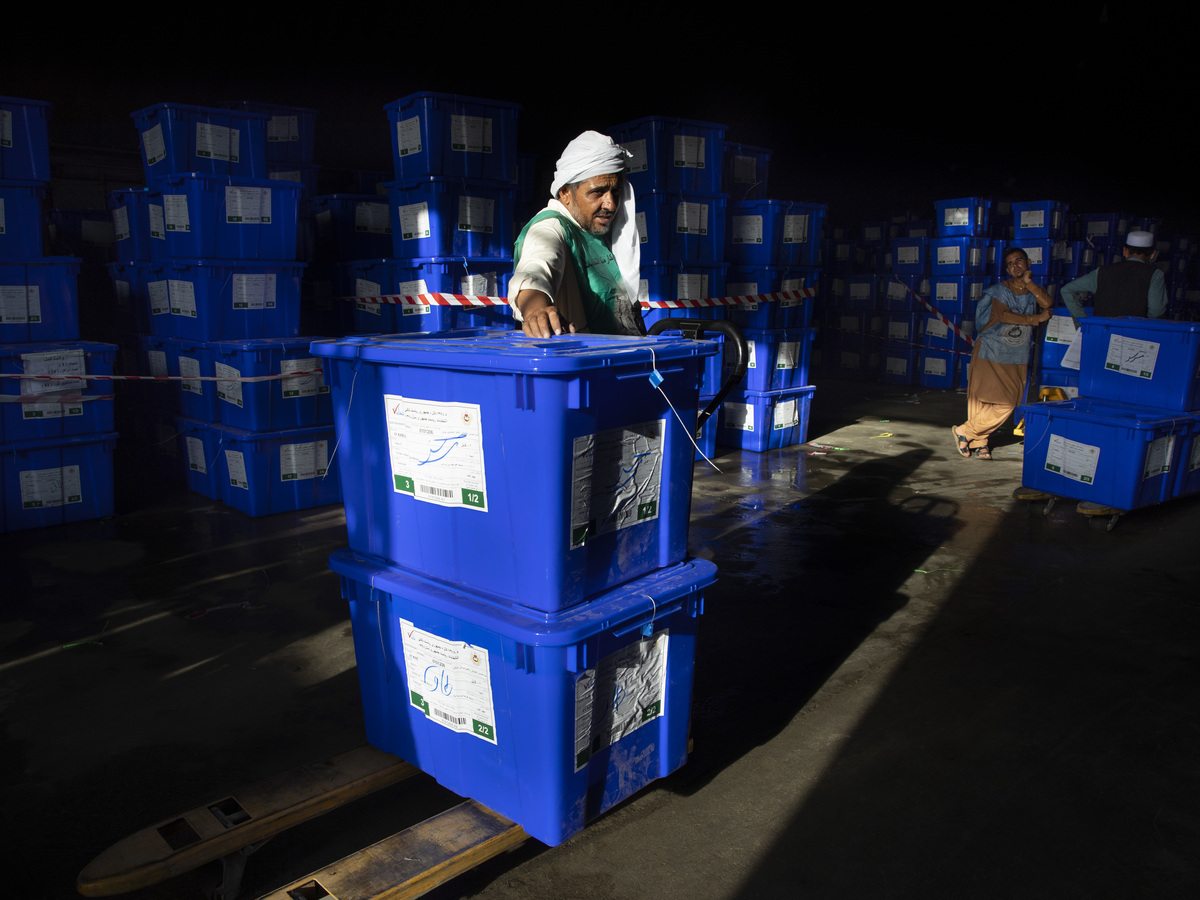 Afghan workers move ballot boxes to trucks getting ready for Saturday’s presidential elections in Kabul, Afghanistan. The lead-up to the vote has been marred by violence and uncertainty.

Afghanistan will hold its fourth presidential election on Saturday, after repeated delays, a campaign marred by violence and the collapse of U.S. talks with the Taliban that left the Afghan government on the sidelines.

The chief contenders — incumbent President Ashraf Ghani and his rival Abdullah Abdullah — are likely giving voters a sense of déjà vu. The two men virtually tied in 2014, when then-Secretary of State John Kerry negotiated a compromise in which Ghani became president and Abdullah assumed the new and ostensibly co-equal post of chief executive.

That agreement five years ago averted the risk of a conflict, but neither candidate will consider sharing power again, says Bilal Sarwary, an Afghan journalist who previously ran for parliamentary elections in the northeastern Kunar province.

Instead of cooperation, Ghani and Abdullah have accused each other of scheming to undermine the election by fraud and to delegitimize the other candidate. A third prominent candidate, former warlord Gulbuddin Hekmatyar, has hinted he might take up arms if he doesn’t like the results.

All of that has left many Afghans worried that these elections will trigger more instability instead of a clear mandate for the next leader, who will be expected to try to negotiate an end to conflict with the Taliban.

“There’s a risk that this process, a national process, will turn into a national crisis,” Sarwary says.

More than 9.6 million of Afghanistan’s 30 million people are registered to vote for one of 18 candidates in around 5,000 polling centers that will be protected by some 100,000 Afghan soldiers and policemen. At least 431 polling centers, serving more than half the country’s population, will remain closed because they are in areas under Taliban control. Hundreds more will be close because of security concerns.

“This is not an election for the whole country,” says Kate Clark, the co-director of Afghanistan Analysts Network, a Kabul-based policy research organization. “It will be an election for some citizens who will be able to get to vote.”

Campaigning this time around was muted amid concerns that the presidential elections could be postponed or even canceled, as yearlong negotiations between the Trump administration and the Taliban neared a conclusion. They were poised to conclude a deal that would allow most U.S. forces to withdraw from Afghanistan.

During that process, Washington’s envoy to the talks, Zalmay Khalilzad, hedged on whether the elections would go ahead — and Taliban negotiators vehemently opposed the vote. President Trump called off those negotiations on Sept. 7, just 21 days before Afghanistan’s election day.

“The negotiations between the U.S. and the Taliban kept putting the possibility of [an] interim government on the table, which meant that most of the campaigns didn’t really get going until late in the day,” Clark says.

Taliban insurgents killed more than 26 people in an attack at a campaign rally for Ghani in northern Afghanistan on Sept. 17. This week, several civilians, including a journalist, were killed in a Taliban attack near a Ghani campaign office in the southern city of Kandahar.

“Every time there is an election, Afghans sacrifice a lot in blood,” says Sarwary, the Afghan journalist.

Another source of concern is the voting process itself.

The Independent Election Commission of Afghanistan and the Interior Ministry have come under criticism for issuing contradictory and unclear statements over how many voting stations will be closed, and which stations face a high security risk. It is also unclear what processes will be in place to prevent fraud if biometric systems fail on election day.

“There are worrying discrepancies,” Clark says of the election commission’s website. “The number of polling centers. The number of registered voters — it differs depending on each page you look at,” she says.

“Basically whenever you’ve got murkiness you’ve got a danger of fraud,” Clark adds.

Those concerns were underscored when 10 former election commission officials were jailed for five years each for abusing their authority and tampering with votes in parliamentary elections held in October 2018. The chairman of the electoral complaints commission was also jailed.

So far, the election commission has said that 431 polling centers will be closed. But 14 others may also be shuttered. Local media reported that between 1,000 and 1,500 will remain open, but face the risk of attack.

Some polling centers were expected to be open in areas under Taliban control, what Clark described as “really dodgy places … places where mass fraud is attempted.”

The lack of clarity led the U.S. Embassy in Kabul to issue a rebuke to the commission and the Interior Ministry on Twitter. “So that these brave voters do not go out in vain, @AfghanistanIEC and @moiafghanistan must clarify the locations of 445 closed #Afghanistan polling centers immediately.”

U.S. Secretary of State Mike Pompeo also appears to have issued a veiled warning to Ghani. In a readout of a telephone call with the Afghan president, Pompeo said he underscored “the United States’ expectation that the conduct of candidates and government institutions holding the Afghanistan election should be beyond reproach to ensure the legitimacy of the outcome.”

But Ghani, Abdullah and the former warlord Hekmatyar have all already planted the seeds of doubt among voters about the transparency of the elections — seeds that the election commission’s chaotic messaging has helped to grow.

“They created an assumption that there will be fraud, and it will be committed by the government,” Sarwary says.

So, unless Ghani wins with an unambiguous mandate, his legitimacy as president is likely to be questioned and eroded from the beginning, he says.

Sarwary says a great concern is the lack of an interested and forceful American presence to mediate between candidates. He referred to Kerry’s mediation in 2014, which he says averted conflict. The Trump administration is not likely to offer that kind of hands-on negotiation, he says.

But Clark, the co-director of the policy research organization, says a hands-off approach is probably for the best.

“It’s not that Afghan backers are not bothered about who wins, or how the election goes, but it has to be sorted out by Afghans,” she says. “Otherwise, you can get a government that is weakened by the foreign hand that’s helped get it into the world.”

And while Western media have previously reported that Ghani is likely to be reelected, Clark urges caution.

“There are so many variables in an Afghan election,” she says. “Obviously democratic support is one,” she adds. “People vote with their group. There’s fraud. There’s coercion. And all those elements will play a role.”

NPR’s Abdul Sattar in Islamabad contributed to this report.