Sister Helen Prejean has written a new memoir called River of Fire, detailing her spiritual life before her activism against the death penalty. 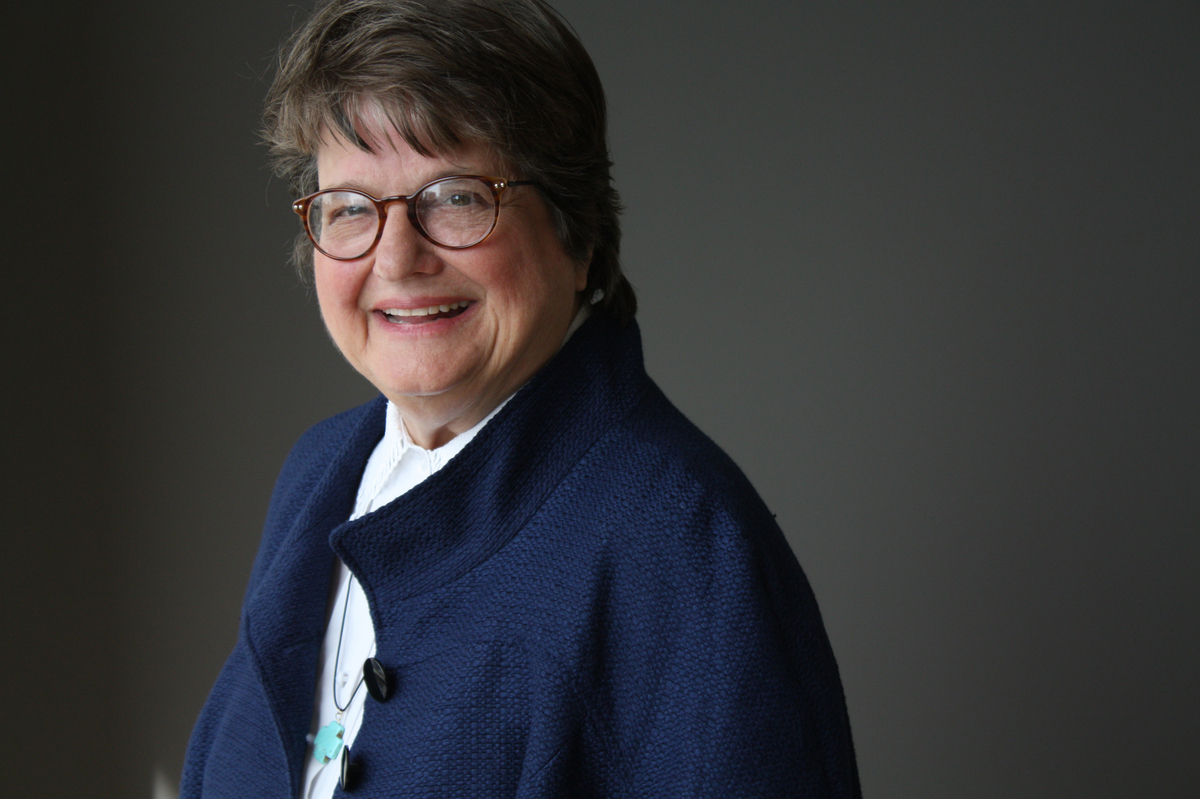 Sister Helen Prejean has written a new memoir called River of Fire, detailing her spiritual life before her activism against the death penalty.

Sister Helen Prejean is best known for her 1993 memoir, Dead Man Walking, about her role as a spiritual adviser to a convicted killer on death row. The story was adapted into an Oscar-winning film starring Susan Sarandon and Sean Penn. Prejean has accompanied six prisoners to their executions and has been at the forefront of activism against the death penalty.

“In [their] last moments, I was amazed that they’re walking,” she says. “‘Sister, pray that God holds my legs up as I walk.’ They take steps. I read scripture to them. … All I knew was: I couldn’t let them die alone.”

Her new memoir, River of Fire: My Spiritual Journey, tells the story of her life leading up to her awakening to social justice movements in the 1980s. She entered the convent in 1957, joining the Congregation of St. Joseph in Baton Rouge, La. She remembers a strict regimen guided by canonical law, where questioning of superiors was forbidden.

“It was called ‘blind obedience,’ and by being obedient, that was how you got holy,” Prejean says. “You gave up self-will, and in the process, as I experienced it, you also began to give up a lot of thinking — critical thinking — because you knew what you had to do was conform in the end to whatever was being asked of you.”

Just a few years later, beginning in 1962, her life was opened up by the reforms of Vatican II — the 21st ecumenical council of the Roman Catholic Church. Suddenly she and the other nuns were allowed to discuss books, talk to each other freely, and choose their own ministry.

Her book ends with her letter to Pope Francis, in which she shares her concern about the way the church excludes women. “How do you love your Church and raise the questions?” she says. “You do that because you do love your Church! … You keep the dialogue going!

On becoming involved in social justice in her 40s

There were two main things driving that. One was: I was really in a spiritual cocoon. We had young girls coming over to the motherhouse for retreats. I really did think that the way you change the world was: You pray and God takes care of the big problems of the world. And I’d say things like, “I’m apolitical. I’m spiritual. I’m above that.” And so this is just one rift — these tensions and dialogues and debates were going on about everything. One of them was … now that Vatican II is open to the needs and sufferings of the world, what is our mission going to be?

Before, it had always been determined by an institutional structure: You would teach in this school, you will be in this hospital. Now, we as a community of sisters are beginning to determine it for ourselves. So we had sisters going over to Latin America and beginning to be in Nicaragua and El Salvador in those countries, and coming back and [saying], “Do you know what’s happening to the people? There are these death squads. There are dictators. There are these people being disappeared and tortured.” They were bringing into our meetings the suffering of what was going on in those countries, and then the journey began.

So I came back to New Orleans … and I would begin to volunteer with the novices taking the bus and going into the inner city, to the St. Thomas housing projects, and beginning to volunteer at a place called Hope House.

On accompanying six men on death row to their executions

Of course I’m on the outside of them, but in a way I’m on the inside of them too, because I’ve gotten to know them. … [They] cannot help but anticipate and imagine their death, which is coming. It’s predetermined, and they all have the same nightmare: “The guards come in for me. It’s my time, and I’m kicking, struggling, ‘No, no!’ and they’re trying to drag me out of my cell, and then I wake up and it’s a dream.” … They shared that with me and their inner anguish.

On what she tries to convey to people as they die

All the words have been spoken. In my faithfulness to them and in visiting them, they know my love and care for them, and that I believe in their dignity. It’s all presence then. It’s just pure presence. Like when you’re at the death of anyone, you’re not making long speeches … there’s nothing to say. You look at my face. I’ll be the face of Christ for you. It’s pure presence and that’s what it is.

Women can’t preach in the Catholic Church. Women cannot read the Gospel at Mass. A young little pimply teenager who happens to be a boy could read the Gospel.

Women can’t preach in the Catholic Church. Women cannot read the Gospel at Mass. A young little pimply teenager who happens to be a boy could read the Gospel. You’ve got to be male. [There are a] million ways it plays out that women somehow cannot fully image Christ. It was what I said in the letter [to Pope Francis], was that women need to be in on those decision-making councils when policies are being decided in the church, because the presence of women — our consciousness, our empathy, what we bring to the table — is really important for the dialogue. And if men in the church are always only talking to other men at the top decision-making levels, and that’s the curia in Rome, that’s the bishops when they meet — it’s always all males. And … if we don’t have full dialogue with women represented … we are never going to be able to embody what the gospel of Jesus is about.

On how witnessing death changed her feelings about her own death

In watching people actually go to their death, I’ve seen how they summoned their courage to make the walk. They’re very afraid, but they do it. I’ve watched Mama, Daddy, [my sister] Mary Ann. … My sister, she was always brave. When we were doing tomboy things like jumping from a limb to catch a rope swing, I’m the last one on the branch, and she’s going, “Jump! Don’t be such a sissy!” So the words that came up inside me after she had died — because she was gone then, I couldn’t hear her voice physically — was: “Sis, death comes for everybody. I did it. It’s going to happen to you too. Don’t be a sissy! I had what it took. God brought me through it, and you’ll have what you need to and it strengthens me.”

Sam Briger and Thea Chaloner produced and edited this interview for broadcast. Molly Seavy-Nesper and Patrick Jarenwattananon adapted it for the Web.