Secretary of State Mike Pompeo speaking at the National Convention of The American Legion in Indianapolis last month. 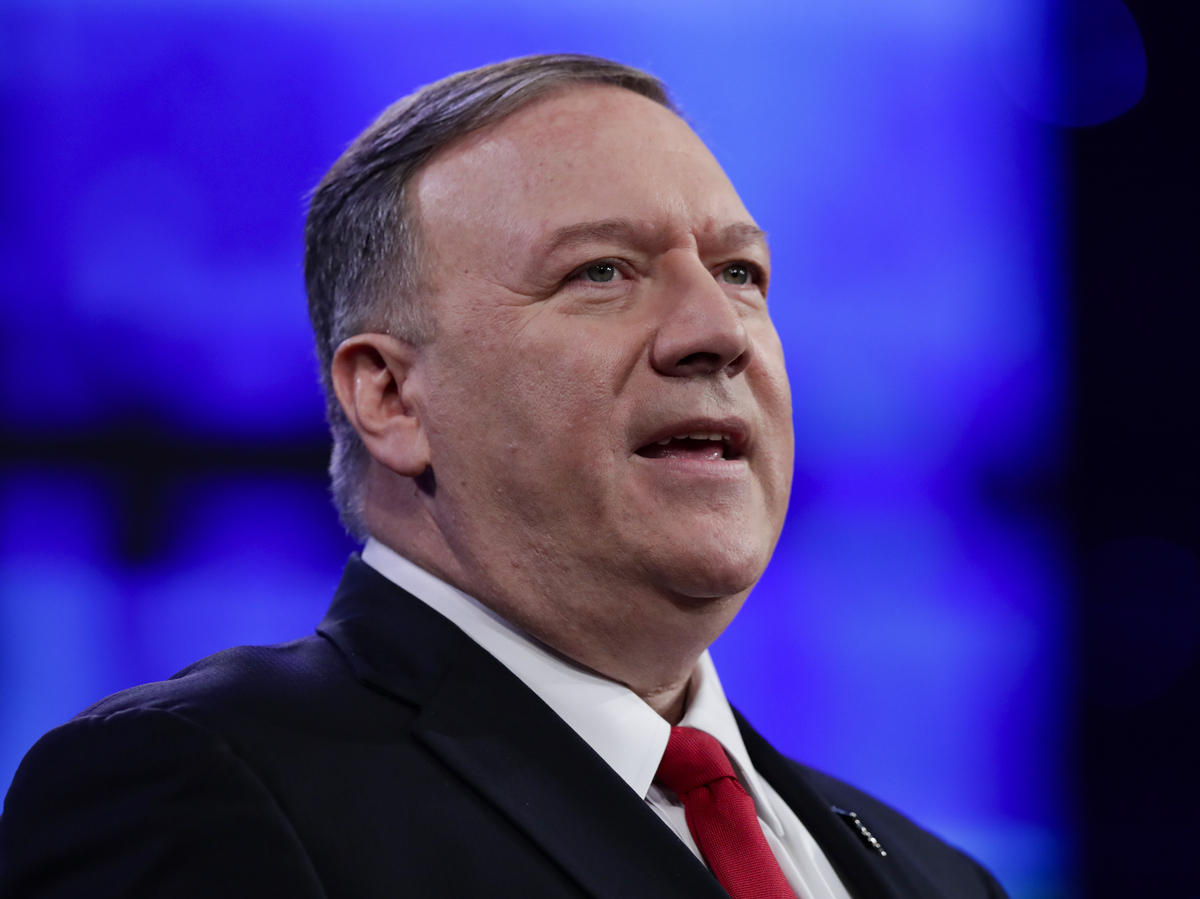 Secretary of State Mike Pompeo speaking at the National Convention of The American Legion in Indianapolis last month.

Mike Pompeo, the nation’s top diplomat, took to the Sunday news talk shows to defend the administration’s cancelling of a secret summit between the leadership of the Taliban and the president of Afghanistan. The meetings had been set to take place at Camp David days before the anniversary of the Sept. 11 terrorist attacks.

In an appearance on Fox News Sunday, Pompeo, the U.S. Secretary of State, said it was the president’s idea to hold the talks at the presidential retreat in Maryland, adding it was a “perfectly appropriate place” to do so.

“President Trump ultimately made the decision,” Pompeo said, adding that Trump wanted to look both the president of Afghanistan Ashraf Ghani and Taliban leaders “in the eye” to determine if a final agreement could be signed off on.

“So we found that arrangement acceptable, that the verification was adequate and we concluded it was a perfectly appropriate place,” Pompeo said. “It’s almost always the case. … that you don’t get to negotiate with good guys.”

Pompeo also confirmed that not only was the meeting scrubbed, but that months-long peace negotiations with Taliban leadership are dead, for now. And the lead U.S. negotiator is being called back home.

“For the time being that is absolutely the case,” Pompeo said on NBC’s Meet the Press. “We’ve recalled Ambassador [Zalmay] Khalilzad back to Washington.”

The now-canceled secret meetings at Camp David were first made public in a series of tweets by Trump Saturday evening.

He cited the recent Taliban attack where a dozen people were killed, including an American soldier, as justification for scuttling the talks.

“Unbeknownst to almost everyone, the major Taliban leaders and, separately, the President of Afghanistan were going to secretly meet with me at Camp David on Sunday,” Trump tweeted.

He added, “Unfortunately, in order to build false leverage, they admitted to… an attack in Kabul that killed one of our great great soldiers, and 11 other people. I immediately cancelled the meeting and called off peace negotiations.”

Unbeknownst to almost everyone, the major Taliban leaders and, separately, the President of Afghanistan, were going to secretly meet with me at Camp David on Sunday. They were coming to the United States tonight. Unfortunately, in order to build false leverage, they admitted to..

Following Trump’s statements on Twitter, a series of Taliban statements suggested how close the two sides had come to announcing an agreement – and the way it would have played out.

Suhail Shaheen, the Taliban negotiations spokesman, said on Twitter the group already finalized an agreement with the Americans “a few days ago.”

Shaheen says the Gulf state of Qatar, which has been hosting the talks, would announce the agreement. Trump’s cancellation, he says, was baffling. “President Trump’s surprising tweets surprised everybody,” he writes “Certainly, he has harmed his credibility.”

In a longer statement, the Taliban said they had been invited to Washington in August to meet the Trump, but they delayed it, until the agreement was ready to sign.

The insurgents said talks with other Afghans on the future of their country were set to begin Sept. 23. Cancelling the talks, the Taliban said, was a “bigger loss for American than anybody else.”

The Taliban said it believes the United States would ultimately return to negotiations.

In an interview Sunday on CNN’s State Of The Union, Pompeo said Trump made the “right decision” to walk away from the meetings.

“When the Taliban tried to gain negotiating advantage by conducting terror attacks inside of the country, President Trump made the right decision to say that’s not going to work,” Pompeo said.

“It’s not appropriate [the Taliban] killed an American. And it made no sense for the Taliban to be rewarded for that kind of bad behavior.”

Pompeo also reiterated that even though the U.S. was engaged in talks with the Taliban, the fight on the battlefield never quit.

An Army carry team moves a transfer case containing the remains of Sgt. 1st Class Elis Barreto Ortiz, 34, past Secretary of State Mike Pompeo. Ortiz was killed in action last week when an improvised explosive device detonated near his vehicle in Kabul, Afghanistan. 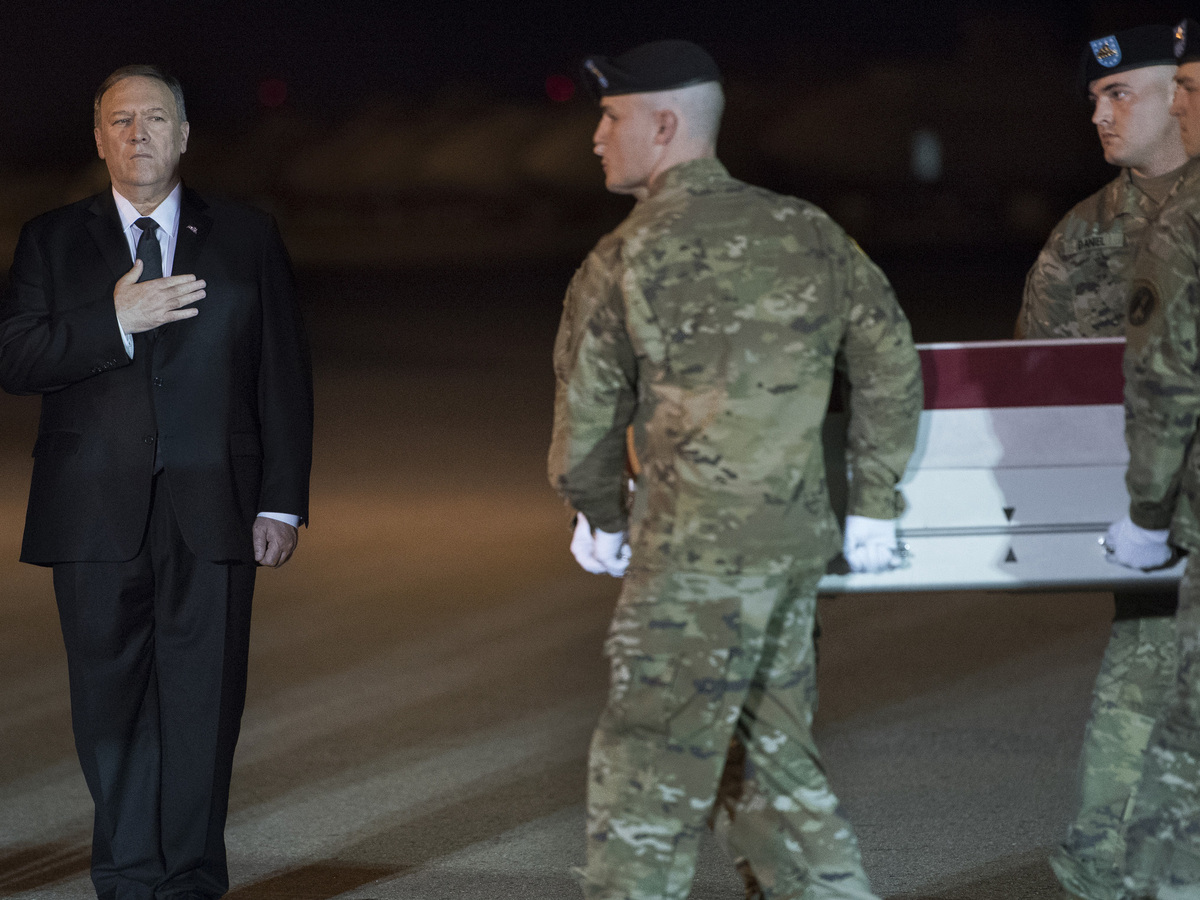 An Army carry team moves a transfer case containing the remains of Sgt. 1st Class Elis Barreto Ortiz, 34, past Secretary of State Mike Pompeo. Ortiz was killed in action last week when an improvised explosive device detonated near his vehicle in Kabul, Afghanistan.

“We have, in just the last 10 days alone, killed over a 1,000 Taliban,” Pompeo says on ABC’s This Week. “We have been fighting and talking in a way that America often doesn’t do.”

Pompeo stresses he hopes negotiations will resume at some point, but says actions by the Taliban did not match “commitments” the sides were working toward in the talks.

“But we finally reached a point where we were close. We had made real progress, and then the Taliban failed to live up to a series of commitments that they had made,” Pompeo said.

The announcement of such high profile talks were planned between a sitting president and leaders of an insurgent organization – on U.S. soil — is astonishing.

The meeting was set to take place just days before the 18th anniversary of the Sept. 11 terrorist attacks. The attacks were carried out by the Al-Qaida, which took up refuge inside Afghanistan and was provided a safe haven by ruling Taliban government.

“We had been hearing that if there were to be a peace deal, it would be signed likely in Kabul with Zalmay Khalilzad being there, possibly President Ashraf Ghani and a member of the Taliban,” Bowman said.

“The fact that they planned to bring it to U.S. soil is highly unusual.”

News of the Taliban’s planned visit to the U.S. drew criticism from Rep. Adam Kinzinger, R-Ill., who is a Lt. Col. in the Air National Guard and served in the Air Force in both Operation Iraqi Freedom and Operation Enduring Freedom.

“Never should leaders of a terrorist organization that hasn’t renounced 9/11 and continues in evil be allowed in our great country,” Kinzinger tweeted Saturday. He ended his tweet: “NEVER. Full Stop.”

Ahead of his appearances on the Sunday talk shows, Pompeo participated in the ceremony marking the return of the remains of Army Sgt. 1st Class Elis Angel Barreto Ortiz at Dover Air Force Base.

Pompeo in his interview with ABC, calls Ortiz a “great American,” and says his death is a reminder that the U.S. has got to the peace agreement right.

“We’ve got to protect American national security interests so that terror can never strike again from Afghanistan, at the same time reduce America’s treasure and blood and that we’ve given for now almost two decades.”

NPR’s Khwaga Ghani in Kabul contributed to this report.