Politics Shape The Debate Over What To Call Far-Right Extremism

A group from the Proud Boys confronts anti-Trump protesters outside Trump’s 2020 campaign kickoff rally Tuesday in Orlando, Fla. The Proud Boys group is known for white nationalist and other extremist rhetoric. 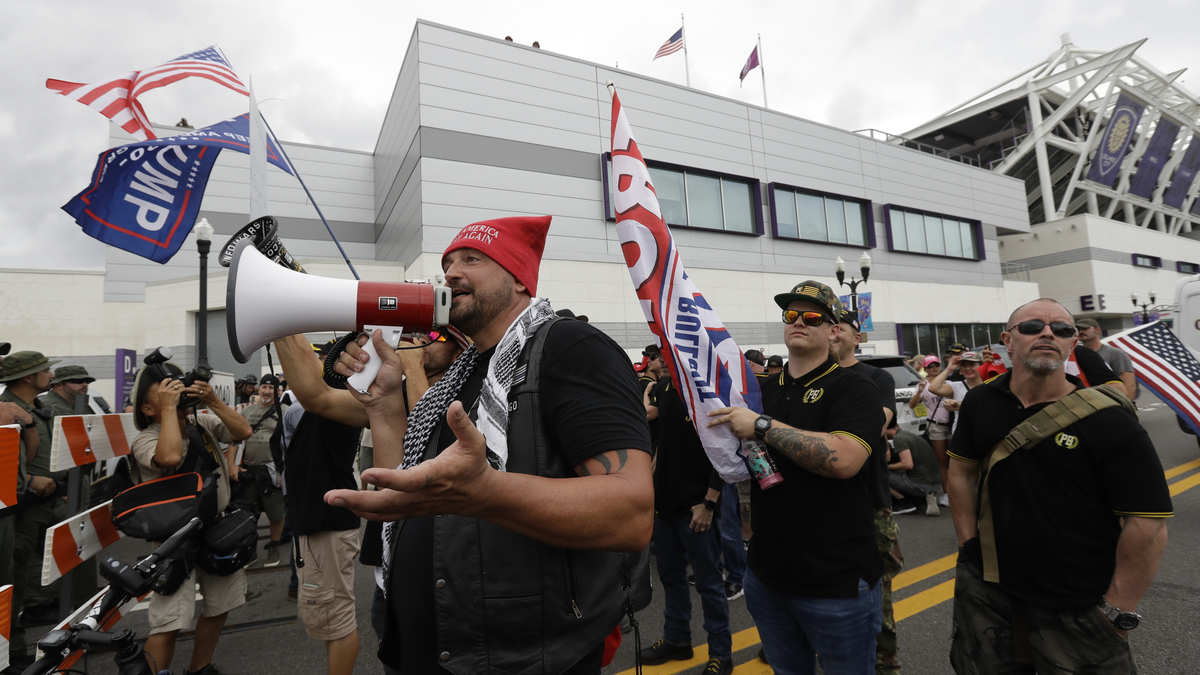 A group from the Proud Boys confronts anti-Trump protesters outside Trump’s 2020 campaign kickoff rally Tuesday in Orlando, Fla. The Proud Boys group is known for white nationalist and other extremist rhetoric.

In the back of a nondescript building at the University of Maryland, a team of researchers combs through the files of homegrown extremists who have plotted attacks in the name of far-right causes.

In each case, researchers are hunting for the motivation, the ideology, that inspired the violence. That means digging into the many elements that make up the far right, as researcher Michael Jensen explained on a recent afternoon.

“We also deal with a lot of just specifically anti-Muslim or anti-immigrant,” James added. “Kind of xenophobic cases.”

That list, rattled off on the spot, is nowhere near exhaustive, but it shows the complexities of trying to better understand far-right violence, which federal authorities say is the deadliest and most active form of domestic extremism. The labels the researchers use to code attacks are part of a wider debate over what to call the far-right threat — and how politics plays into that debate.

The analysis produced by the university’s National Consortium for the Study of Terrorism and Responses to Terrorism, or START Center for short, gets picked up by policymakers, academics and journalists. So, the research team says, the more precise the wording, the better, when it comes to helping public understanding of an evolving threat that defies simple labels.

“It’s difficult to put people in these neat buckets and say there’s the white supremacist over there and there’s the anti-government ones over there,” Jensen said. “It doesn’t work that neatly.”

Two debates: one academic, one political

But while academic researchers are pushing for more precision in describing white nationalism and other far-right extremism, the Trump administration seems to be moving in the opposite direction, with some officials adopting more generic terms such as “ethno-violence” or “racially motivated extremism.” Unless they’re being questioned by Congress, security officials rarely mention “white nationalist” or “white supremacist” violence. Those terms are missing from federal agencies’ websites, too.

“I’m appalled that the leadership, at least some people, feel that they can’t use those terms,” said Mary McCord, a former federal prosecutor who oversaw terrorism-related cases at the Justice Department. “These acts of violence we’ve seen recently — Tree of Life synagogue [in Pittsburgh], the recent events in California, international events like in Christchurch in New Zealand. I mean, these are white supremacists.”

President Trump has dismissed white nationalists as a “small group of people.” He has retweeted white nationalist accounts. And there is little daylight between his anti-immigrant speeches and those of far-right extremists. White supremacist factions were spotted among the crowds cheering for Trump at his 2020 campaign kickoff rally in Florida this week.

Critics of the administration’s handling of the far-right threat say it is no mystery why administration officials don’t speak up more forcefully — it would put them at odds with the White House.

Eric Ward, a longtime civil rights activist who leads the nonprofit Western States Center in Oregon, said there are two main consequences of the administration’s mixed messaging. First, it muddies the picture that law enforcement and the public have of the white nationalist threat; and, secondly, it gives at least the appearance of political cover to hate groups that have moved from the fringe to the mainstream in recent years.

“You have a white nationalist movement that, correctly or incorrectly, believed that it was part of a coalition that elected Donald Trump to the White House,” Ward said. “And this administration should be saying and doing everything within its legal power and its moral voice to drive home that it wants nothing to do with that movement.”

There’s no sign that such a clear-cut disavowal is coming, extremism trackers say. Instead, the administration remains fixated on playing up the threats of Islamist and far-left militant groups, especially Antifa, a self-styled anti-fascist organization known for black-masked protesters.

Art Jipson, a professor at the University of Dayton, said this was made clear to him during a recent video conference with a State Department official who used terms Jipson had never encountered in his nearly three decades of studying homegrown extremists.

“Anarcho-Marxist violent revolutionaries,” Jipson said, laughing. “And then they started using terms like Islamo-terrorism and anarchic Islamic terrorist organizations and networks. I don’t even know what that means!”

He said he asked the State Department rep to explain.

“The person made a joke about, ‘Oh that’s just the term my boss gave me to use in this webinar,'” Jipson recalled. “I’m, like, what? You’re using a term and you don’t even know what it means?”

Realizing that the government isn’t going to take the lead on defining the far-right threat, researchers at universities and think tanks have begun talks to come up with a common vocabulary: Should they use “far right” as an umbrella term? What about “the radical right”? Or is “white supremacist” the driving ideology?

“This is one of the most contested questions you can ask,” said Cynthia Miller-Idriss, an American University professor who has written extensively about the far right. “I just came from a meeting two weeks ago with a group of scholars from across the country and we spent the whole dinner, practically, talking about: Can we come up with a term?”

They couldn’t reach an agreement over dinner, Miller-Idriss said, but they’re still brainstorming how to make such a complex topic more widely understood by the public and clear enough so that law enforcement knows exactly what to look for as it investigates far-right extremism.

“Language matters because it’s a reflection of how seriously something gets taken,” she said.

NPR interviewed more than a dozen extremism trackers, and each had different preferred terms and different reasons for why theirs was the most accurate.

For example, some terms might work well in the United States but have different interpretations overseas — a problem as researchers increasingly look at white racial violence as an international phenomenon. At times, the debate is over the subcategories. Some scholars draw distinctions between white nationalism and white supremacists; others say a racist is a racist. Still others want to do away with the “left” and “right” framing of extremism, arguing that the real measure is whether an ideology leans toward democratic ideals or totalitarianism.

After the Sept. 11 attacks, a similar debate erupted over what to call militants from al-Qaida and, later, the Islamic State. “Islamist extremist” has emerged as the term with the most support, but there’s still disagreement nearly 20 years later.

Jipson said he is worried that the tug of war over words is clouding the real threat: white racial extremism’s potential for violence.

“Whether it’s a belief in a race war that they see as inevitable, or belief that their nation is under attack and they have to fight back, violence — whatever the motivation — is a call to arms,” Jipson said. “So we have to articulate that and explain that in as thoughtful and precise and clear a way as we can.”