Carrie Barrett, a former defendant in a suit brought by Methodist Hospital, testifies during service at Apostolic Fellowship Church on Sept. 15, 2019 in Memphis, Tenn. Her debt to the hospital was cleared following a MLK50 and ProPublica investigation into the debt collection practices. 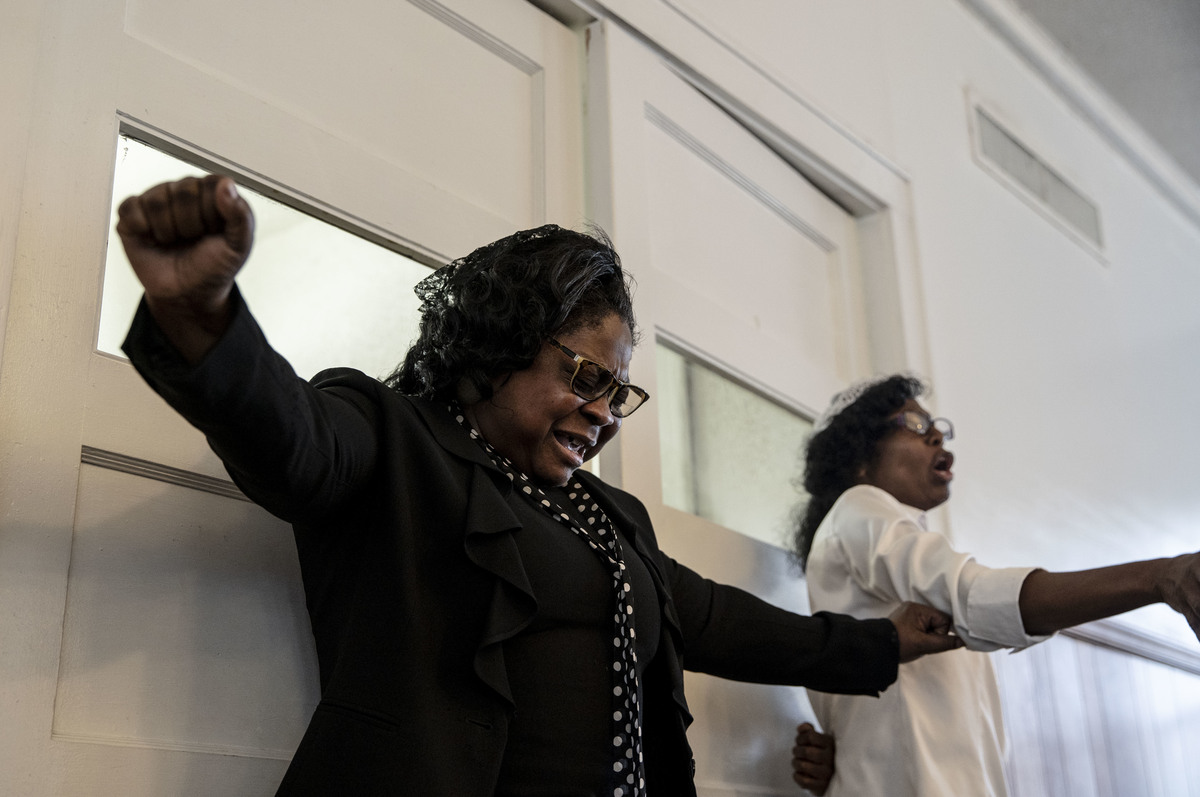 Carrie Barrett, a former defendant in a suit brought by Methodist Hospital, testifies during service at Apostolic Fellowship Church on Sept. 15, 2019 in Memphis, Tenn. Her debt to the hospital was cleared following a MLK50 and ProPublica investigation into the debt collection practices.

This article was produced in partnership with MLK50: Justice Through Journalism, which is a member of the ProPublica Local Reporting Network.

The largest nonprofit hospital system in Memphis, Tenn., is erasing the debts owed by more than 6,500 patients it sued for unpaid hospital bills. Methodist Le Bonheur Healthcare had come under fire for its practice of aggressively pursuing medical debt from poor patients, in a city where nearly 1 in 4 residents live below the poverty line. The move to forgive outstanding bills comes amidst an overhaul of its debt collection processes announced in late July.

The dramatic shift was prompted by an investigation from nonprofit news organizations MLK50: Justice Through Journalism and ProPublica that revealed that Methodist filed more than 8,300 debt lawsuits from 2014 through 2018, including against its own employees. Methodist had doggedly pursued low-income defendants who had little ability to pay, often garnishing their meager paychecks.

The single-page “case satisfied” notices filed by Methodist are coming into the Shelby County General Sessions Court faster than staff can process them. A court administrator estimated a backlog of about 4,500 Methodist notices are waiting to be entered into the court’s system.

From July 30 through Tuesday, the court had logged more than 2,300 notices submitted by the hospital system that wiped away patients’ debts. That’s more than nine times the number of notices filed by Methodist in the first six months of 2019.

For now, it appears that Methodist is no longer using the courts as a collection agency, a practice that was roundly criticized by health care experts, some elected officials and members of the United Methodist Church, with which Methodist is affiliated. Since July 3, the hospital has not filed any new debt collection lawsuits or garnishment attempts.

Among the defendants who no longer owe is Carrie Barrett, a part-time Kroger employee featured in one of the MLK50-ProPublica articles. Barrett’s case began in July 2007, when a two-night stay at Methodist Bonheur Healthcare, where doctors performed a heart catherization, left her with a $12,019 bill. In 2010, Methodist sued her for more than $16,000, one-third of which was attorney’s fees.

Over the years, thanks to interest and court costs, Barrett’s debt climbed to more than $33,000. If she had paid $100 per month as ordered by the court, she would have been 90 by the time she paid it off.

Barrett says she received a call nearly two weeks ago from an administrator who said the hospital had reviewed her records. “He said, ‘The balance is zero. … I said, ‘You don’t know how good that sounds to my ears.'”

Jessica Curtis, a senior adviser at Community Catalyst, a national advocacy organization, has followed other nonprofit hospitals that have been the subject of similar media reports.

“I was trying to remember when have I seen such a rapid switch,” Curtis says. “I don’t know that I’ve seen that before. The scale of what they are attempting to rectify is really commendable from what we’ve seen thus far.”

Nonprofit hospitals are generally exempt from local, state and federal taxes. In return, the federal government expects them to provide a significant community benefit, including charity care and financial assistance.

Methodist, which operates five hospitals in Shelby County, does provide some charity care — but experts faulted it for its aggressive collections practices.

Its handling of poor patients began with a financial assistance policy that, unlike many of its peers around the country, all but ignored patients with any form of health insurance, no matter their out-of-pocket costs. If they were unable to afford their bills, patients then faced what experts say is rare: A licensed collection agency owned by the hospital.

Lawsuits followed. Finally, after the hospital won a judgment, it would repeatedly try to garnish patients’ wages, which it did in a far higher share of cases than other nonprofit hospitals in Memphis.

Methodist repeatedly refused to make its executives available for interviews, but it sent statements defending itself, noting how it is the only health care system that has hospitals in all four quadrants of Shelby County and that it provided more than $226 million in community benefit. It did not address why its financial assistance policy was less generous than those of its peers or why it garnished wages in a higher percentage of cases than other hospitals.

But on June 30, three days after the MLK50-ProPublica investigation was published, Methodist CEO Michael Ugwueke said in a column published in The Commercial Appeal that the hospital would spend the next 30 days reviewing its collections and financial assistance policies.

Days later, Methodist announced it would suspend court collection activities over unpaid hospital bills. In the weeks that followed, the hospital’s attorney, R. Alan Pritchard, dropped dozens of suits that had been on the court docket.

On July 30, the hospital announced wide-reaching reforms. “We were humbled to learn that while there’s so much good happening across our health system each day, we can and must do more,” Ugwueke said in a media conference call.

The hospital also said it would no longer accept court-ordered interest on medical debt nor would it seek to collect attorney’s fees or court costs from patients.

The pay increase signaled that Methodist took the issue seriously, Curtis says. “The inclusion of wages means someone has realized not just the symptom of the problem but the core root of the problem. This is a clearly promising start,” she says.

It’s unclear whether Methodist will resume suing patients for unpaid bills. And the hospital has not said how many additional “case satisfied notices” it could file. Plaintiffs cannot refile lawsuits after the case has been marked satisfied.

One of the defendants featured in the investigation was a Methodist housekeeper, who asked that her name not be used for fear that the hospital would fire her for talking to a reporter.

In 2017, Methodist sued her for the cost of hospital stays to treat chronic abdominal pain she experienced before the hospital hired her. She owed about $23,000, including around $5,800 in attorney’s fees.

In January, a General Sessions Court judge ordered her to pay $75 biweekly. The housekeeper paid reliably until this summer, when she missed several days of work because she was sick, eventually ending up in the hospital. That left her paycheck short.

She received a small annual raise in August, and another to $13.50 less than two weeks ago

Last week, a reporter showed the housekeeper a copy of her case satisfied notice.

“God is a good God,” she said, laughing and smiling. “I’ve been calling them and they tell me nothing. … This is a blessing right here.”

Barrett, the Kroger employee featured in the first MLK50-ProPublica story, likewise praised God. At church this month, Barrett had an update for the congregation, which had heard her speak about her financial troubles before.

“I have a zero balance,” she said. “I just want to thank God for blessings that he has brought to me. … I thank him for the victory!” she shouted, as others joined her in praise.

“Victory is ours, amen!” a minister said from the pulpit. “Don’t y’all know that Jesus will drop those charges? Glory to God!”