Special counsel Robert Mueller leaves after making a statement about the Russia investigation on Wednesday at the Justice Department. After the investigation, he said, “if we had had confidence that the president clearly did not commit a crime we would have said so.” 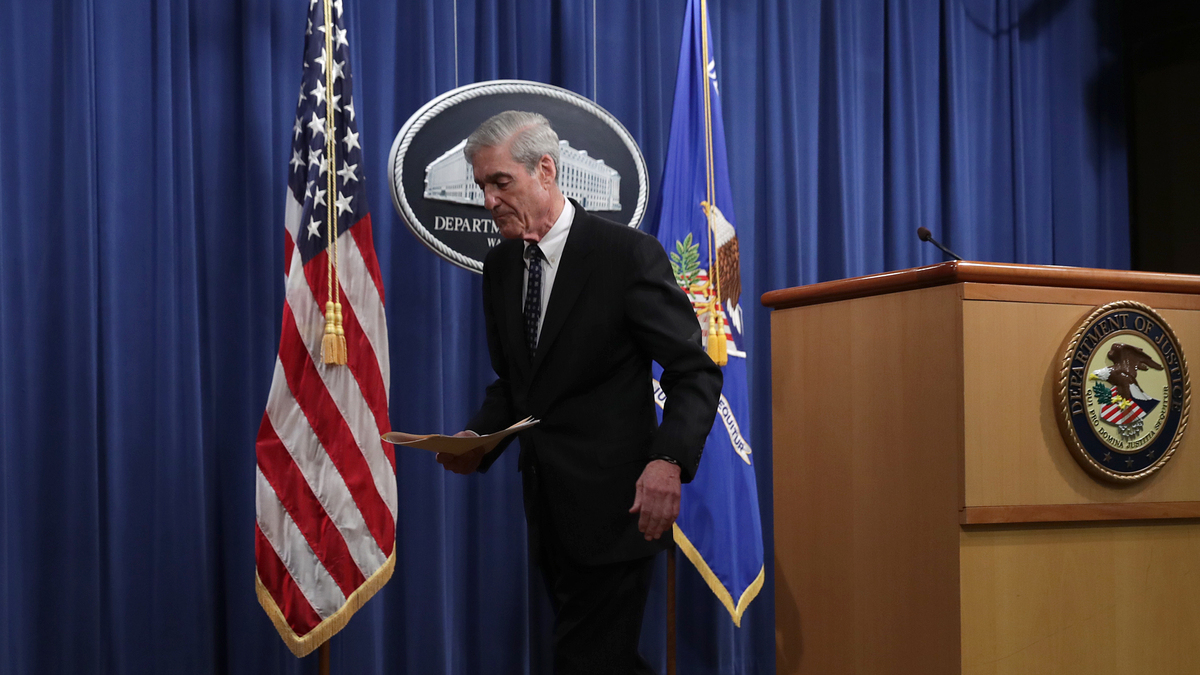 Special counsel Robert Mueller leaves after making a statement about the Russia investigation on Wednesday at the Justice Department. After the investigation, he said, “if we had had confidence that the president clearly did not commit a crime we would have said so.”

By the end, he had resigned and handed his caseload to Congress.

The man who headed the sweeping investigation into Russian interference in the 2016 campaign, the Trump campaign’s role and the actions of now-President Trump himself took no questions. He said he hoped this was the last he would have to say about it.

“The report is my testimony,” Mueller said. “I would not provide information beyond that which is already public in any appearance before Congress.”

Mueller pointed back to the report repeatedly — and drew a line between what he saw as his authority and that of Congress.

Importantly, he reiterated that he felt his team could not pursue charges against the president: “Under long-standing department policy, a president cannot be charged with a federal crime while he is in office. … Charging the president with a crime was, therefore, not an option we could consider.”

Instead, as the report did in writing, he kicked accountability to Congress: “[T]he Constitution requires a process other than the criminal justice system to formally accuse a sitting president of wrongdoing.”

In other words, once again, it’s over to Congress.

House Speaker Nancy Pelosi, D-Calif., has been trying to hold back the wing of her party itching to impeach. She tried to do so again Wednesday.

“We will continue on our path” of investigations, led by half a dozen Democratic chairmen of various committees, Pelosi said. She pointed to “victories in the courts,” noted that only a minority of her members are openly pushing for impeachment, but added, “Many constituents want to impeach the president, but we want to do what is right and what gets results — what gets results.”

Pelosi and her lieutenants make the case publicly and privately that impeachment is thorny politically. Without Republicans on board, they say, it becomes a partisan exercise that threatens to hurt Democrats politically and the House majority.

Trump walked out of an infrastructure meeting with Pelosi and Democratic Senate leader Chuck Schumer last week and said he would not work on legislation with Democrats until investigations were dropped. After that, Democratic strategists said Pelosi’s hand was strengthened.

And the fact is: As long as Pelosi has a majority of her members — which she made very clear Wednesday that she does — she is on solid footing.

Theoretically, Mueller’s on-camera statement shouldn’t change anything. It merely reiterated what has already been known, read and reported on.

But that’s not the world we live in. Many Americans didn’t pore over Mueller’s findings, line by line. Even libertarian and Republican Rep. Justin Amash, who has called for impeachment proceedings to begin, has chided members of Congress for not reading the whole report.

The thing is: When officials come forward and put their face and spoken words behind their written ones and in front of a camera, it carries more weight. More people see it. It can be played and replayed on cable news and evening news programs and morning news programs on endless loops.

Mueller’s statement makes clear what those who have read his report know: It is an impeachment referral, and it’s up to Congress to act. They should.

This is as close to an impeachment referral as it gets. Robert Mueller could not clear the president, nor could he charge him — so he has handed the matter to Congress, which alone can act to deliver due process and accountability.

It’s time for Congress to begin impeachment hearings and follow the facts. Robert Mueller clearly expects Congress to exercise its constitutional authority and take steps that he could not. We can’t let the president defy basic accountability measures built into our Constitution.

“Congress must continue its investigations,” Sanders said in a tweet. “If the House Judiciary Committee deems it necessary, I will support their decision to open an impeachment inquiry.”

Biden’s campaign said in a statement, in part:

“Vice President Biden agrees with Speaker Pelosi that no one would relish what would certainly be a divisive impeachment process, but that it may be unavoidable if this administration continues on its path. For all these reasons and many more, Vice President Biden will continue to make the case as to why President Trump should not be re-elected. That is the surest way to get him out of office.”

Presidential candidates calling for impeachment of the president can — and certainly does — put a degree of pressure on Pelosi. But there are two paths here: one, presidential campaigning with candidates trying to win over an activist base, and two, a House leader trying to preserve her majority.

How Democrats conduct their investigations will matter, so Pelosi might point her members to Mueller and something he said Wednesday: “We chose those words carefully, and the work speaks for itself.”