Kelp Has Been Touted As The New Kale, But It’s Been Slow To Catch On

Bren Smith is a seaweed farmer and co-founder of GreenWave, a nonprofit that supports and trains ocean farmers. 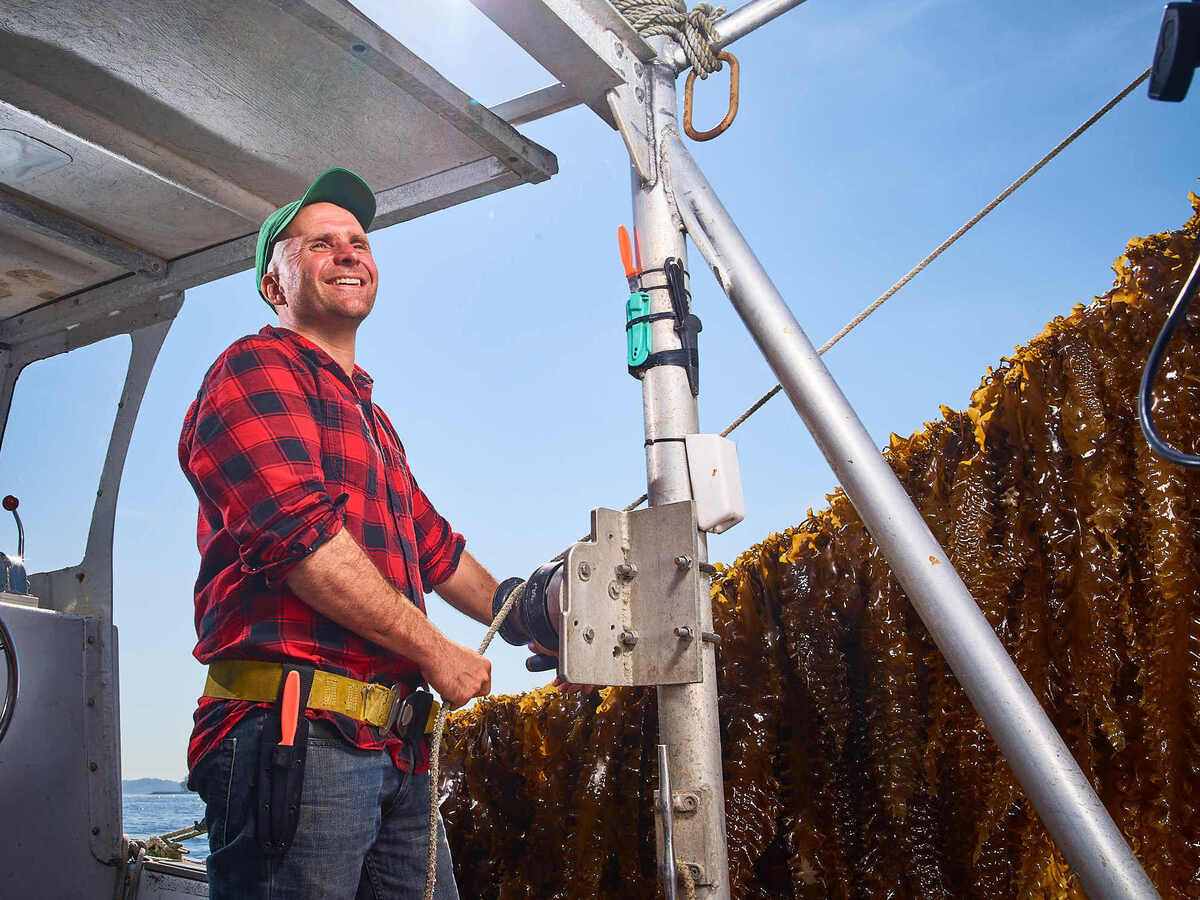 Bren Smith is a seaweed farmer and co-founder of GreenWave, a nonprofit that supports and trains ocean farmers.

A few years ago, many news stories announced that “kelp is the new kale.” That the global seaweed harvest is worth more than lemons and limes. That it’s the “next great food craze,” and that it will be “everywhere by the next decade.”

Where are we now?

Kelp is a type of seaweed that grows in large underwater forests, and looks a little like green lasagna noodles with curly edges.

Seaweed farming has a lot going for it: It doesn’t require any fertilizer, can actually be used as fertilizer, helps fight climate change, and cleans up ocean water by taking in nitrogen compounds. It’s also a nutritious sea vegetable — rich in vitamins C and K, and minerals like iron and calcium.

But now, the growing industry in the U.S. needs to build infrastructure, and to change people’s tastes on a larger scale.

Bren Smith is a leading advocate for what he calls restorative ocean farming — growing seaweed alongside shellfish like mussels and oysters, which absorb carbon dioxide and nitrogen compounds, protect shorelines from storm surges, and rebuild marine ecosystems. He co-founded a nonprofit called GreenWave to promote the movement and train aspiring farmers.

“The momentum’s been unbelievable … we have requests to start farms in every coastal state in North America, 20 countries around the world,” Smith says.

Smith’s farm is just off the coast of Connecticut, on the Long Island Sound. There are now farms up and down the New England coast, with more getting started in California and the Pacific Northwest.

“We’re growing, and people are eating it, Smith says. “This isn’t like a cute little Brooklyn bee farm project creating nice little bottles of honey at the farmers market … there are hundreds of thousands of pounds being produced and sold at this point.”

Kelp can be used as a pasta substitute, as noodles, sautéed with butter and mushrooms, or ground into powder to use as seasoning. High end restaurants have also used seaweed as a side vegetable and on cookies.

However, some industry specialists say growing seaweed has become perhaps too popular. Anoushka Concepcion is an assistant extension educator with the Connecticut Sea Grant; she works with seafood producers and researchers and answers questions about the latest technology and trends.

“The idea sort of took off before all the practical challenges could be addressed,” Concepcion says. “Farmers are finding it difficult now just to get rid of their seaweed.”

Seaweed can be used to make seasoning and even gin. 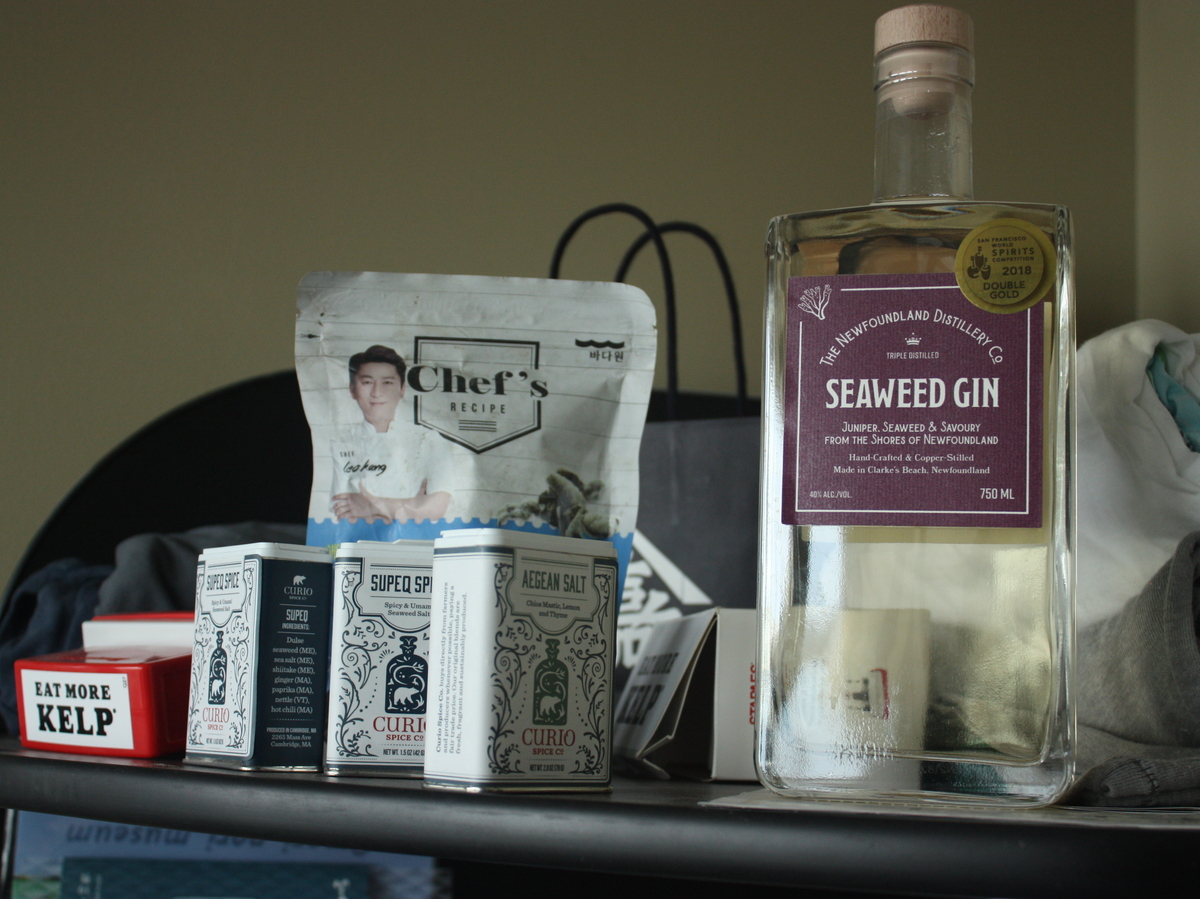 Seaweed can be used to make seasoning and even gin.

She explains that the seafood business usually works like this: Oysters and clams are sold right off a boat to a dealer, who sells them to restaurants.

“Dealers are not buying seaweed yet, because there’s no established market on their end,” Concepcion says.

Smith, GreenWave’s co-founder, says all the farmers who are a part of that network have no problem selling their seaweed, but he agrees with Concepcion about another obstacle — a lack of large-scale processing facilities in Connecticut.

His farm grows kelp, and he explains it has a shelf-life of a half-hour and needs to be blanched quickly after it leaves the water in order to stabilize it, which is expensive and fine to do on a small scale. But, if more farmers grow kelp, they will need big buildings with giant tubs of hot water and freezers to process it and keep it safe to eat.

On the other side of the country in Alaska, farmers also have no problem growing seaweed, the problem is what to do with it once it’s harvested, says Gary Freitag, a marine advisory agent at the Alaska Sea Grant who works closely with the state’s marine resources industries.

He says Alaska has about five seaweed farms, and he gets around 20 calls a month from people interested in starting their own. But now the industry needs to address questions like: Does the market want frozen seaweed, dried seaweed, or other products? Can they process seaweed using existing facilities for salmon and other fish? Do they have enough trucks and transport hardware if the industry takes off ?

“I think in 10 years it will be a fairly substantial industry up here, but now it’s just going to be very small and experimental,” Freitag says. “We just don’t know how to solve all these … bottlenecks (that inhibit further growth.)”

Smith of GreenWave says that “expectations [for how quickly seaweed would take off] have been set way too high. This is an exciting, scalable, replicable thing that can be a true climate solution, but it’s going to be really hard work.”

Still, he adds, climate change is a big issue, so this work has to happen fast.

“It’s not about growing slow and small because we only have 30 years to address the climate crisis — that would have been great in the 1950s.”

Smith says the seaweed business is past the startup phase. But aside from infrastructure, there’s another big challenge: How do they get more people to eat it?

That could take some time, says Jet Tila, a celebrity chef who specializes in pan-Asian cuisine. He has used seaweed in many Japanese and Chinese dishes in his restaurants, but when asked to make it the star of a plate in a challenge on the show Iron Chef, he found it difficult.

“Seaweed is not a center-of-the-plate ingredient traditionally,” Tila says. “It lacks fat. It has savoriness, [but] it lacks the protein feeling from meat, so it was really difficult to pair it into something to try and make it the star of the show.”

He explains that kelp has a distinct, strong ocean flavor; and an unfamiliar, slippery, dense texture — features that can take time for Americans to get used to. He works in large-scale corporate food service, and says seaweed will be mainstream if it becomes the center of the plate in those settings.

“You’re still in the early-adopting phase, I don’t think we’re even close to the middle,” Tila says. “It’s going to be, in my opinion, quite a few years.”