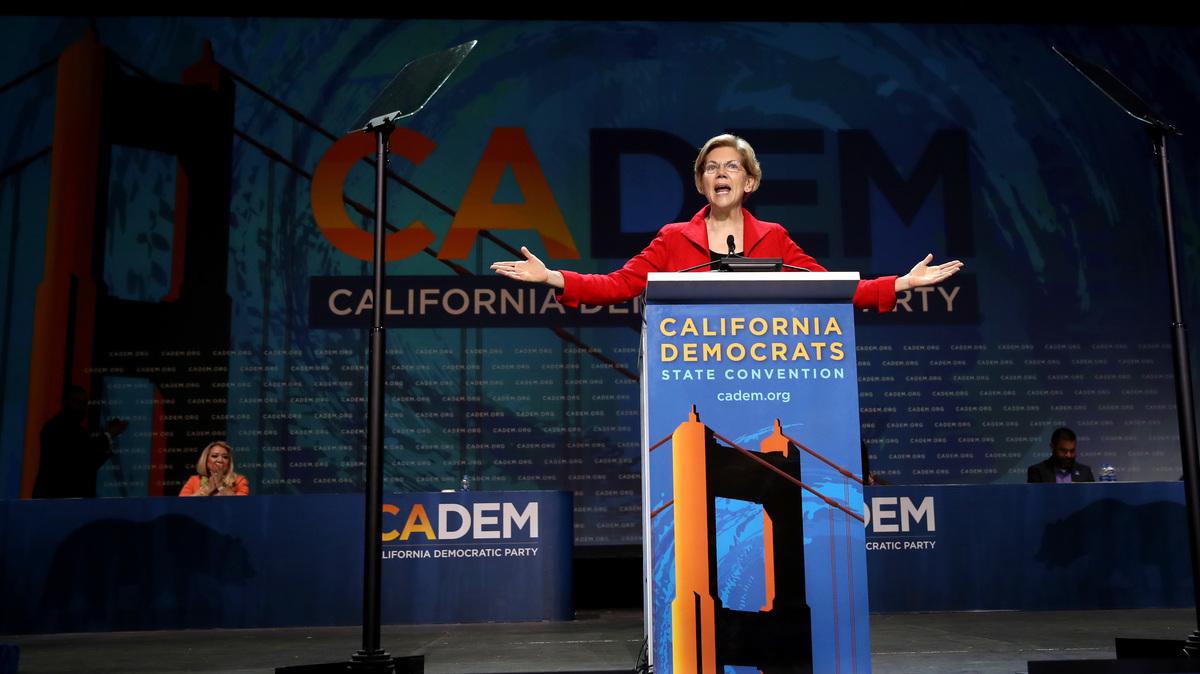 What will the first Democratic presidential debates look like at the end of this month?

We got our first glimpse Saturday in San Francisco.

First, we saw the visual of candidate after candidate — 11 in all, with 3 more to come Sunday — parading across the stage at the California Democratic Party’s annual convention.

We also heard how presidential hopefuls are sorting themselves on two key questions that will likely shape much of the narrative when they take the debate stage in Miami on June 26 and 27: should Democrats keep the focus on President Trump or on their own proposals? And should those proposals tack toward the left to energize their base, or toward the center in order to appeal to independent voters?

On the Trump front, several candidates played to the anti-Trump crowd of Democrats that California Rep. Barbara Lee called “the most progressive and the most Democratic and the wokest Democrats in the entire country.” Sen. Kamala Harris of California spent almost the entirety of her seven-minute speech attacking Trump administration policies. Harris drew some of the loudest applause of the day by saying, “We need to begin impeachment proceedings.”

New York Sen. Kirsten Gillibrand called Trump a “coward.” Others, like former Texas Rep. Beto O’Rourke and South Bend, Ind. Mayor Pete Buttigieg peppered their speeches with criticism of the president, but repeatedly made broad appeals to Democrats to make sure Trump didn’t distract them from their own agenda to expand access to health care and combat climate change.

The second question — moderation vs. progressivism — provided some of the first real moments of candidate-on-candidate criticism, albeit in a general, theoretical way that did not involve any direct call-outs.

Both Buttigieg and Massachusetts Sen. Elizabeth Warren delivered some of their strongest arguments yet against the more moderate, incremental approach. In the process, they began crystallizing their case against the world view espoused by the field’s current front runner, former Vice President Joe Biden.

“Big problems call for big solutions,” said Warren, who on Friday drew more than 6,000 people to a rally in Harris’s hometown of Oakland. “And some Democrats in Washington believe the only changes we can get are tweaks and nudges. If they dream, they dream small. Some say if we all just calm down, the Republicans will come to their senses.”

“Here’s the thing,” Warren continued, to cheers from the progressive activists who make up the bulk of the California Democratic Party’s state delegates. “When a candidate tells you about all the things that aren’t possible, about how political calculations come first … they’re telling you something very important: they are telling you that they will not fight for you.”

Speaking later in the day, Buttigieg made a similar pitch that, without mentioning Biden directly, sounded an awful lot like an argument against a long-time United States Senator and Vice President who’s running on the idea of restoring the Obama administration’s legacy. “In these times, Democrats can no more promise to take us back to the 2000s or 1990s than conservatives can take us back to the 1950s,” he said. “[Trump] wins if we look too much like Washington. He wins if we look like more of the same.”

“The riskiest thing we could do is try to play it safe,” Buttigieg said.

On Saturday, Biden was halfway across the country, speaking at a Human Rights Campaign dinner in Columbus, Ohio. But in a few weeks, he will be standing on the same stage, one or two lecterns down, when Buttigieg, Warren or another Democrat trailing him in the polls aims fire at his core message.

With Biden in Ohio, the mantle of pragmatism and compromise instead fell to former Colorado Gov. John Hickenlooper, who was repeatedly booed when he told the room that “socialism is not the answer,” and that “we shouldn’t try to achieve universal coverage by removing private insurance from over a hundred million Americans. We shouldn’t try to tackle climate change by guaranteeing every American a job.”

“I wasn’t surprised,” Hickenlooper told NPR afterwards. “We know that this is not a popular message with a certain portion of the Democratic Party, but I think it’s a message that’s got to be said.”

At the Miami debates, the theater likely won’t be filled with as many vocal Democratic activists cheering and booing these arguments. But the conversation will be viewed by millions of Americans, many of them tuning into this 23-person contest for the very first time.