Journalists Raise Money, Post Jobs And Buy Beers For Peers After A Week Of Layoffs

Members of the BuzzFeed News team work at their desks at BuzzFeed headquarters on Dec. 11, 2018. 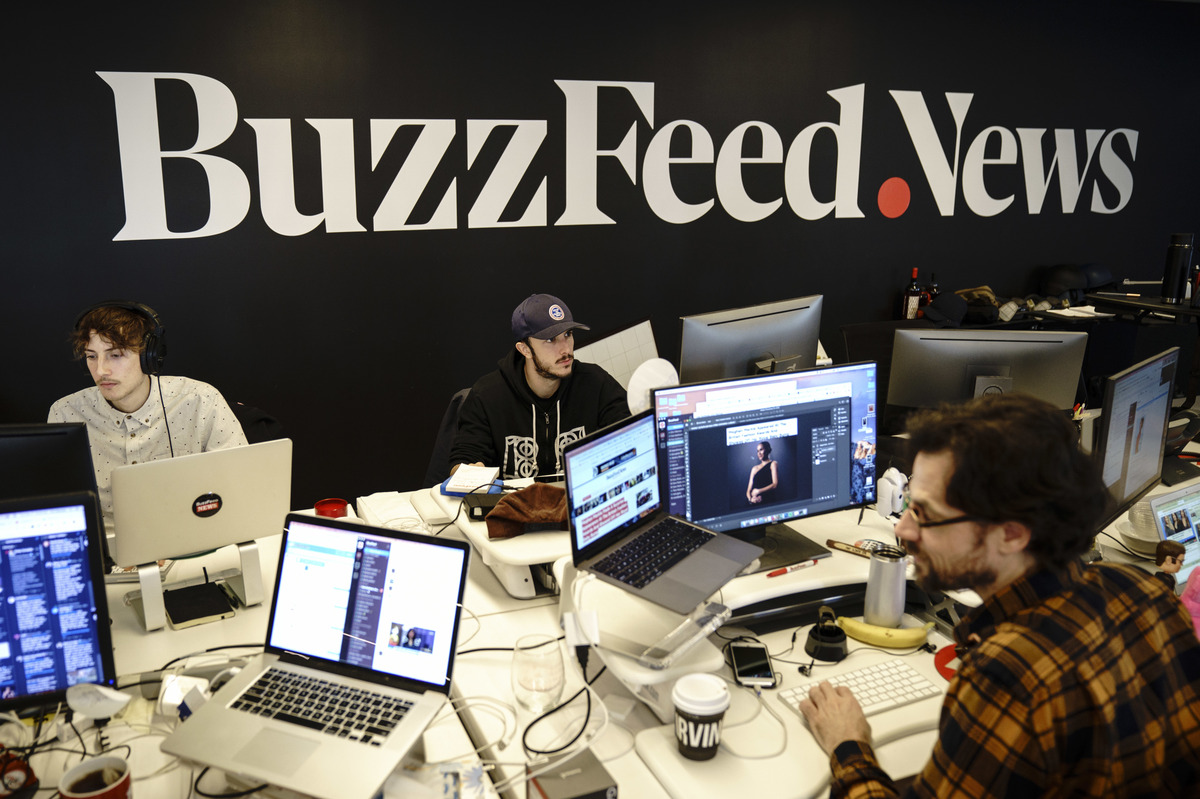 Members of the BuzzFeed News team work at their desks at BuzzFeed headquarters on Dec. 11, 2018.

It’s been a tough week in the journalism industry.

On Wednesday, BuzzFeed announced plans to lay off 15 percent of its overall workforce. The layoffs are expected to affect around 200 employees — many in the company’s news division.

The same day, The Wall Street Journal reported that Verizon’s media group — which includes AOL, Yahoo and HuffPost — will lay off 7 percent of its staff. The layoffs include the entire HuffPost opinion and health sections.

Also on Wednesday, the newspaper giant Gannett started slashing jobs. For Gannett, the company behind USA Today and prominent local newspapers like The Indianapolis Star and The Arizona Republic, this week’s layoffs are part of years of downsizing and cuts for the company.

Many laid off journalists quickly took to Twitter to announce the loss of their jobs.

“Like so many talented and lovely journalists, I was laid off today,” tweeted HuffPost deputy opinion editor Chloe Angyal.

Hey guys, I’m one of the many reporters laid off from BuzzFeed News today. I’m proud of the work I’ve done here, alongside some of the best investigative reporters there are. If you’re hiring, my DMs are open.

On and on it continued.

But amid the Twitter storm of bad news, some supportive tweets emerged.

Following the lead of journalists in Chicago who started a beer fund for laid off colleagues in 2017, BuzzFeed News copy editor Emerson Malone decided to do the same for his own colleagues.

On Friday he tweeted, “A lot of my BuzzFeed News colleagues — and friends — are losing their jobs today. Please buy them a beer.”

Malone started a plumfund page to raise money, which brought in more than $7,800 in a 24-hour time span from hundreds of donors.

“I didn’t anticipate it,” he said. “The support system is so affirming.”

Some BuzzFeed staff in Los Angeles went out for drinks on Friday, but Malone said they plan to use the beer fund money when the group goes out again on Monday, which is many people’s last day.

Since BuzzFeed is an international organization, Malone said he also plans to spread the wealth evenly with laid-off BuzzFeed journalists in other locations. He said the layoffs affected a wide swath of people in his company.

“You could start a new newsroom on Monday with the amount of talent being lost,” he said.

In Washington, D.C., the National Press Club announced that it would offer free drinks and tacos for journalists who lost their jobs on Friday night.

Executive Director of the National Press Club, Bill McCarren, said the intention was to give journalists not only a little relief, but also an opportunity to network and stay optimistic.

“Just because you’re laid off someplace doesn’t mean you can’t get something somewhere else,” he said.

When looking for their next job, recently laid off journalists might have a little help from supporters. Hundreds started posting on Twitter, creating job posting threads and using #journalismjobs to advertise open positions.

Others took it a step further. Chelsea Cirruzzo, a reporter at Inside Health Policy, decided to create a spreadsheet of jobs that people could add to.

She remembered how it felt when she was looking for a job a few months ago.

“It felt really draining to put in applications again and again and not hear back,” she said.

What helped her keep track of all her applications were spreadsheets. She hopes her spreadsheet can similarly help other journalists. BuzzFeed Senior Manager Kaye Toal also started a spreadsheet of her own, which included both journalism and other media industry jobs.

Many of those offering support for laid off journalists were journalists themselves. McCaren said he isn’t surprised by this, and spoke to a sense of solidarity within the struggling industry.

“A lot of people who are working have been through something like this at some time in their career,” he said.