In this courtroom artist’s sketch, defendant Jeffrey Epstein (left) and his attorney Martin Weinberg listen during a bail hearing Monday in federal court in New York. On Thursday, a judge said Epstein should remain in detention. 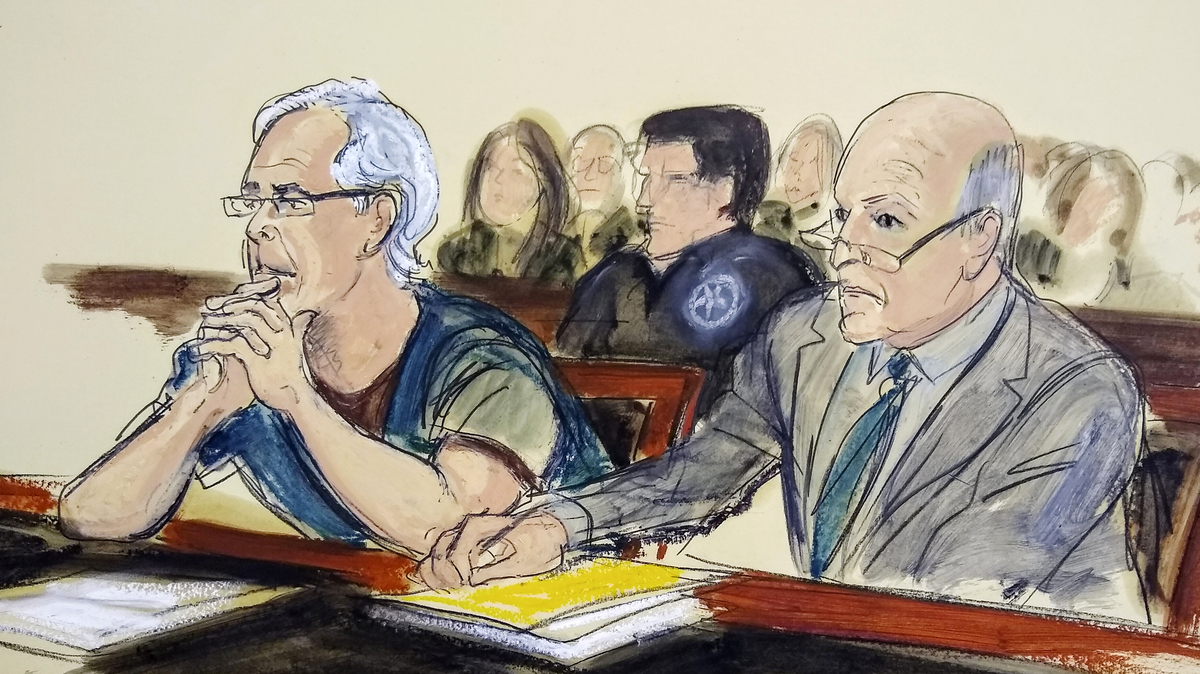 In this courtroom artist’s sketch, defendant Jeffrey Epstein (left) and his attorney Martin Weinberg listen during a bail hearing Monday in federal court in New York. On Thursday, a judge said Epstein should remain in detention.

A federal judge in Manhattan has ordered that multimillionaire Jeffrey Epstein remain confined while he awaits trial on federal sex trafficking charges.

U.S. District Judge Richard M. Berman announced his decision that the 66-year-old financier be held without bail on Thursday, following a hearing Monday in which Epstein’s lawyer asked that his client be placed on house arrest.

In denying that request, the judge called the bail offer from Epstein’s defense team “irredeemably inadequate,” saying his first priority in making the decision is weighing the danger Epstein posed to the community and to other potential victims.

Prosecutors had called Epstein a flight risk, noting that he owns two private jets and has traveled abroad more than 20 times in the past 18 months. They also feared he might try to obstruct justice, accusing him of tampering in a previous case by paying out hundreds of thousands of dollars in hush money to silence potential witnesses.

In a filing opposing bail, prosecutors wrote that Epstein “has already demonstrated a willingness to use intimidation and aggressive tactics in connection with a criminal investigation.”

Epstein’s lawyers had asked that their client be issued an ankle bracelet and allowed to remain at his Manhattan mansion, which prosecutors estimated is worth $77 million. They said the registered sex offender has had a clean record since he was convicted as part of a plea agreement a decade ago.

Prosecutors, however, said the recent federal charges show Epstein has not changed his ways.

“And any doubt that the defendant is unrepentant and unreformed was eliminated when law enforcement agents discovered hundreds or thousands of nude and seminude photographs of young females in his Manhattan mansion on the night of his arrest, more than a decade after he was first convicted of a sex crime involving a juvenile,” Assistant U.S. Attorney Geoffrey Berman wrote the judge.

Epstein’s victims also wanted him detained until trial, according to prosecutors: “They believe it would be unfair to victims of a wealthy defendant, like Epstein, if he were to be given greater freedoms than others would be in similar circumstances.”

The federal indictment in New York comes more than a decade after Epstein faced similar federal charges in Florida. He eventually pleaded guilty to two state felonies and served 13 months in county jail as part of a plea agreement with federal prosecutors.

The new charges heightened scrutiny of that deal, which was negotiated by then-Miami U.S. Attorney Alex Acosta. Last week, Acosta announced that he was resigning from his current post as Labor secretary.

In the indictment unsealed earlier this month, prosecutors say Epstein is a serial predator who abused dozens of minors, including girls as young as 14.

From at least 2002 to 2005, Epstein “enticed and recruited” girls to his houses in Manhattan and Palm Beach, Fla., to engage in sex acts with him, according to the indictment. He allegedly paid some of the girls to recruit others in order to “maintain and increase his supply of victims.”

During Epstein’s court appearance on Monday, federal prosecutors revealed that investigators who raided his Manhattan mansion found “piles of cash,” diamonds and an expired foreign passport with Epstein’s photo but another name.

In a court filing Thursday, Epstein’s lawyers said a friend gave Epstein the passport bearing a “non-Jewish name,” and that it was necessary “in case of hijacking” when traveling abroad.