Is ‘The Blob’ Back? Latest Marine Heat Wave Could Pose New Risks To Sea Life

Sea surface temperature anomaly maps show temperatures above normal in orange and red. The warming could lead to dire conditions for sea life. 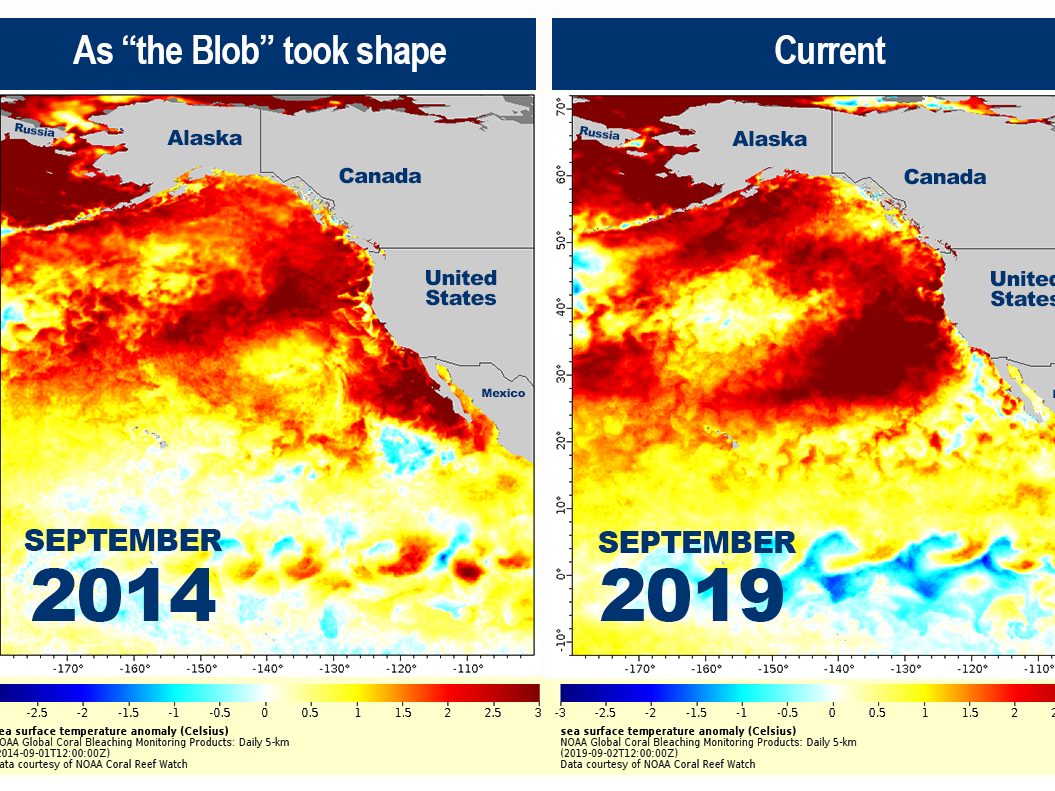 Sea surface temperature anomaly maps show temperatures above normal in orange and red. The warming could lead to dire conditions for sea life.

A huge new marine heat wave has gripped the waters off the U.S. West Coast, threatening to ravage marine life and decimate commercial fishing over an expanse of the Pacific Ocean.

The new hot spot rivals “The Blob” — a gigantic patch of unusually warm water that appeared in nearly the exact same spot in 2014.

Like its predecessor, the new expanse of warm water sprawls from Alaska to California. Scientists at the National Oceanic and Atmospheric Administration fisheries announced Thursday that they are tracking the event, hoping to minimize its impact on marine ecosystems.

The new event — which NOAA is calling the Northeast Pacific Marine Heatwave of 2019 – began forming in mid-June, according to Andy Leising, a research scientist at NOAA’s Southwest Fisheries Science Center in La Jolla, Calif.

Leising told reporters the warm water has become “the second largest marine heatwave that we have seen since 1981,” when NOAA first began collecting satellite data.

“The only thing that’s been bigger is The Blob between 2014 to 2015 and it [appears] to have already impacted, or at least reached the coast in much of the state of Washington and some of Northern Oregon,” Leising said.

The warming is caused by a ridge of high pressure over the area that keeps winds calm and allows the sun to warm the water’s surface. The absence of wind keeps the ocean from churning up cooler water from the depths below. Researchers say the result is a temperature increase of 5 to 6 degrees Fahrenheit in the warmest areas.

The scientists aren’t directly tying the warming phenomenon to climate change — but they say there is an underlying warming that has boosted ocean temperatures every year.

NOAA scientists say there was a chance that the heat wave is relatively new and could dissipate if conditions change.

“It looks bad, but it could also go away pretty quickly if the unusually persistent weather patterns that caused it change,” says Nate Mantua, a research scientist at the Southwest Fisheries Science Center.

But if the conditions linger they could trigger a series of problems for the marine web food chain, beginning with those that thrive in cold-water temperatures. For instance, warmer-than-usual temperatures kill off the type of nutritious food juvenile salmon need to survive as they move from rivers into the ocean, leaving them the equivalent of ocean junk-food to survive.

As those populations decline, their predators — including sea birds and marine mammals – are forced to forage closer to shore.

Researchers found The Blob forced sea lions to search for food further from their rookeries in the Channel Islands off the coast of Southern California. Hungry pups also set out on their own and became stranded on area beaches. Similarly, endangered orca and humpback whales that feed on Chinook salmon moved closer to the coasts to eat. That led to record numbers becoming entangled in lines from crab traps and other fishing gear.

Another cause for alarm among scientists is the potential for a massive toxic algal bloom, which in 2015 crippled commercial fisheries along the entire West Coast. That could lead to changes from NOAA, which sets limits to avoid over-fishing and manage sustainability.

“If productivity levels are changing because of weather events or climate events then we have to adjust the amount that we catch accordingly so we don’t over-harvest them,” says Chris Harvey, a biologist at the Northwest Fisheries Science Center.

If that happens, Harvey says, fishing communities may have to change their plans, so they can manage their resources responsibly.